Supply chain issues and staff shortages are likely as Omicron spreads out of control. 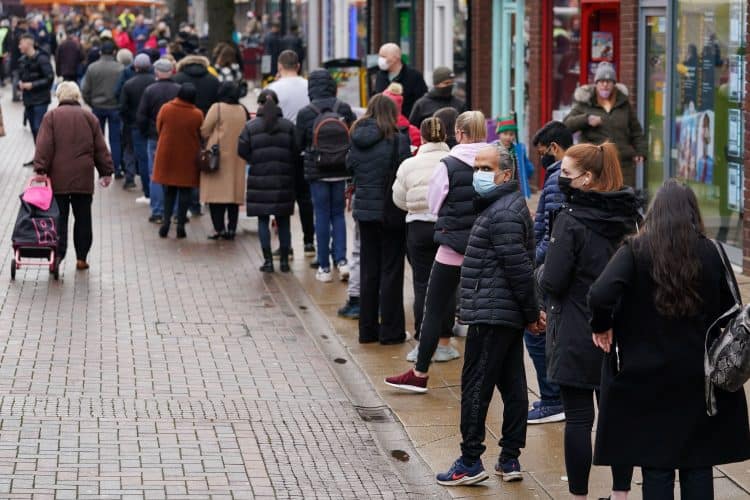 More than a million people are likely to be isolating with Covid-19 on Christmas Day amid warnings that Omicron is spreading “unbelievably fast”.

The unprecedented spread of the new variant caused supermarkets to warn of more supply chain problems as they faced the prospect of more mass staff absences.

Ministers are also concerned that spiralling infection rates will result in huge numbers of workers being off sick, with disruption rivalling the summer “pingdemic”, according to The Times.

A further 59,610 cases were confirmed on Tuesday, with levels expected to soon surpass the daily record of 68,053 set in January.

Sajid Javid, the health secretary, warned yesterday that Omicron infections were doubling every two days, suggesting there was a “very real risk” the NHS would be overwhelmed – to such an extent that children injured in car crashes would be left untreated.

And analysis by The Times suggests millions will have to cancel Christmas celebrations because they will be forced into isolation.

The variant’s rapid spread means four times as many people are likely to be isolating with Covid this Christmas than last year, when a third lockdown was imminent and household mixing was banned across the country.

If the current rate continues, close to 100,000 people will be confirmed with Omicron on Christmas Eve – with just under a million isolating on Christmas Day.

And there is a possibility the NHS could be overwhelmed next month, a leading scientist has said, though uncertainties remain over the impact of Omicron.

Professor Graham Medley, from the London School of Hygiene & Tropical Medicine and a member of the Scientific Advisory Group for Emergencies (Sage), told BBC Radio 4’s Today programme he is worried “we could see numbers of people being admitted to hospital getting very large” if infections continue to rise and spill into older age groups.

It came as Dr Jenny Harries, chief executive of the UK Health Security Agency, told MPs the Omicron coronavirus variant is “probably the most significant threat we’ve had since the start of the pandemic”.

She said the “real potential risk” is whether “cases turn into severe disease, hospitalisations and deaths”, but added that it is “too early” to be clear on that.

Speaking in a personal capacity, Prof Medley said it is “very hard to predict in real time exactly what’s happening on any day, but it’s certainly true that the numbers of infections primarily with Omicron is increasing, and has been increasing quite dramatically”.

He added: “We’re probably now at the level that we have been at the past, sort of back in January, and it does look as though it’s going to continue beyond that and go over it.”

Prof Medley said there is not currently any good information on the severity of Omicron but added: “We are a population in a very different position to this time last year, in the sense that the majority of people have been vaccinated and there has been much infection since then, so there is much more immunity…

“The fact that we are much more immune than we were generally means that the virus will appear to be much less severe.

“So, individually, we have a much lower risk but the numbers of infections means that even though individually we’re at less risk, at a population level (the) number of people ending up in hospital could get very large.”