“This is obviously related to the cost of living crisis and people are just getting desperate." 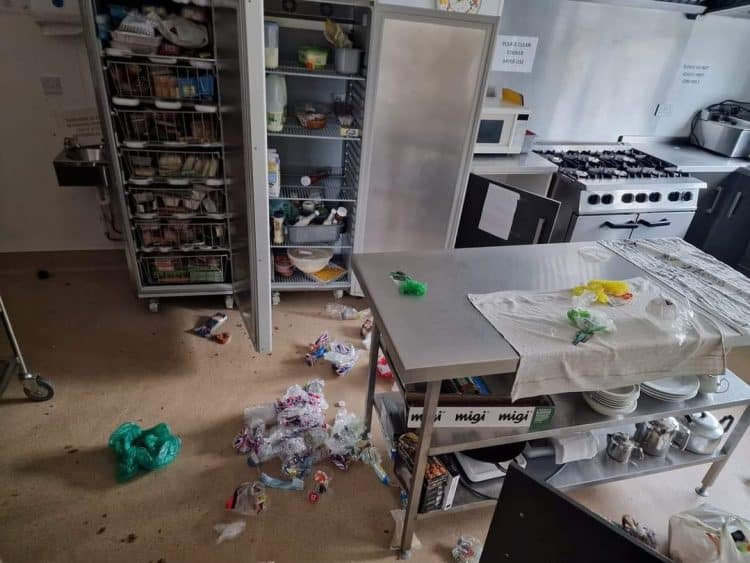 Volunteers at Tasty not Wasty CIC woke up on Tuesday morning to find broken windows and empty cupboards – but their money boxes untouched.

Unfortunately, despite only a few bags of food being taken from the hub in Llanyrafon Methodist Church, Wales, the crooks left the freezer open – spoiling huge amounts.

The non-profit community project has been running for two years and provides meals to more than 400 people a month across the local area.

One volunteer, who asked not to be named, said: “Sometime last night the food bank was broken into – they took nothing of value, purely food.

“It’s a food share so we support all the other banks in the area and collect near use-by and end-of-life products to give to people suffering from financial hardship.

“The sad bit is that if they had just messaged us through the normal means they could have had a box of food delivered to them.

“This is obviously related to the cost of living crisis and people are just getting desperate.”

The thieves left two broken windows and food strewn across the floor of the bank after they made off, the volunteer said.

But, despite there being collection pots accessible within the church, the only things taken were food items.

“They’ve put two church windows in – one was into the kitchen area where most of the food is stored,” said the volunteer.

“They’ve taken what appears to be easy to eat meals like crisps.

“In doing so, they’ve left all the freezers open and a lot of the food has to be binned now.

“Financially it was peanuts, it was a few bags carrier bags worth of food – more damage is to the freezers which were full.

“We’re checked by the food standards people so we have to assume it’s all been contaminated.

“Two freezers had to have everything ripped out and binned as well as the fridges and the loaves of bread that Lidl provide to us.

“Now we’re looking to invest in CCTV cameras and up the security of the church.

“I’m absolutely horrified to be honest and the woman that runs it is understandably devastated.”

Gwent Police said: “We’ve received report of burglary in Cwmbran after an unknown person broke into Cwmbran Methodist Church Llanyravon between 10.30pm on Monday 29 August and 7.15am on Tuesday 30 August.

“Enquiries are ongoing and anyone with information including CCTV or dashcam footage, can call us on 101 or send us a direct message on social media, quoting log reference 2200294359.

“Alternatively you can contact Crimestoppers anonymously on 0800 555 111 with details.”