The ex-Channel One editor held a sign saying: “Don’t believe the propaganda. They’re lying to you here.” 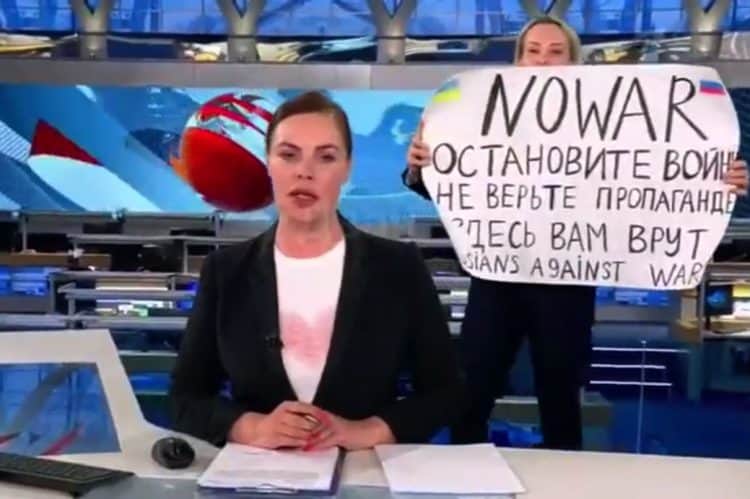 A former broadcaster burst into a live news bulletin on Russia’s state Channel One station in protest against Vladimir Putin’s invasion of Ukraine.

Marina Ovsyannikova, a former editor at the channel, ran on to the set during a live broadcast of the nightly news on Monday evening, shouting: “Stop the war. No to war.”

She also held a sign saying: “Don’t believe the propaganda. They’re lying to you here.” It was signed in English: “Russians against the war.”

“Russians against the war”

The news anchor continued to read from her teleprompter speaking louder in an attempt to drown out Ovsyannikova, but her protest could be seen and heard for several seconds before the channel switched to a recorded segment.

Ovsyannikova also released a pre-recorded video via the OVD-Info human rights group in which she expressed her shame at working for Channel One and spreading “Kremlin propaganda.”

“Regrettably, for a number of years, I worked on Channel One and worked on Kremlin propaganda, I am very ashamed of this right now. Ashamed that I was allowed to tell lies from the television screen. Ashamed that I allowed the zombification of the Russian people. We were silent in 2014 when this was just beginning. We did not go out to protest when the Kremlin poisoned [opposition leader Alexei] Navalny,” she said.

“We are just silently watching this anti-human regime. And now the whole world has turned away from us and the next 10 generations won’t be able to clean themselves from the shame of this fratricidal war.”

Wearing a necklace in the blue and yellow of the Ukrainian flag, Ovsyannikova said in her video statement that her father is Ukrainian and her mother is Russian.

“What is happening in Ukraine is a crime and Russia is the aggressor,” she said. “The responsibility of this aggression lies on the shoulders of only one person: Vladimir Putin.”

She urged fellow Russians to join anti-war protests in order to bring an end to the conflict. “Only we have the power to stop all this madness. Go to the protests. Don’t be afraid of anything. They can’t imprison us all.”