As both Theresa May and Jeremy Corbyn visited the devastating scene of the Grenfell Tower tragedy, the PM pledged a full public probe into the blaze that claimed many lives. As we reported yesterday there was a marked contrast between the Labour leader who spoke to survivors and members of the community, attended a church […]

As both Theresa May and Jeremy Corbyn visited the devastating scene of the Grenfell Tower tragedy, the PM pledged a full public probe into the blaze that claimed many lives.

As we reported yesterday there was a marked contrast between the Labour leader who spoke to survivors and members of the community, attended a church service and spent time listening to those affected and the Prime Minister who was criticised widely for not letting the public near her.

She announced a full public inquiry into the fire that has claimed 17 lives confirmed, – a figure that may well rise to over 100 by all accounts.

Theresa May insisted: “people want answers, and it’s absolutely right, and that’s why I am today ordering a full public inquiry into this disaster,” yet no explanation as to why a government-controlled inquiry is needed rather than  an independent coroner’s inquest – and no acknowledgement that the government had received such a report in 2013 after the last such high rise fire and totally failed to act on.

In fact Theresa May’s new chief of staff Gavin Barwell, who was housing minister until losing his seat in last week’s election, had promised to review building regulations following the coroner’s report into the blaze at Lakanal House in South London in 2009, but had totally failed to act on recommendations.

The inquest into the deaths of six inhabitants of the high rise Southwark tower block found panels on the walls were not fire resistant enough and insufficient fire risk assessments had been made.

Rather than immediately putting the coroner’s urgent recommendations – in particular retrofitting fire suppression and sprinkler systems into older blocks –  into force, Barwell allowed four years to pass with no promised review until Tuesday night’s horrendous disaster.

It had been left to the Community Secretary at the time, Eric Pickles to pass on the advice to local councils, but with no regulations to enforce them and with no extra funding to carry any of it out during a time when councils’ resources were being pillaged in the name of austerity. 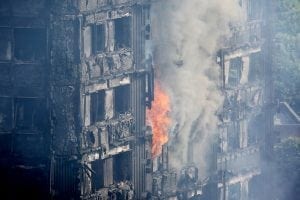 So when Theresa May vowed to carry out a new inquiry yesterday, saying “we need to have an explanation of this, we owe that to the families. To the people who have lost loved ones, friends, and the homes in which they lived,” the words rang hollow.

After six people died including three children in the 14 storey Lakanal House housing block, vital recommendations were made. And those warnings were largely ignored up to this week’s horrific fire that has left many families homeless and many dead. – As were the warnings of the residents of Grenfell House who repeatedly asked for what they felt were dangerous fire hazards in their home to be addressed.

Sophie Khan, solicitor for the victims of the Lakanal House tower block fire told Newsnight that after the coroner’s report into the 2009 blaze, the deaths at Grenfell Tower were “avoidable” as sprinklers would have allowed those families trapped in the block to escape and saved people’s lives.

She also questioned what Theresa May would be hiding by holding a Government-led inquiry rather than a genuinely independent inquest in which survivors and bereaved families would be entitled to ask questions.

“You’d have to ask them why they’ve sat on it for four years,” he told LBC Radio, insisting that sprinkler systems could have prevented the horrific blaze in North Kensington on Tuesday night.

Criticisms have also been made of warnings ignored, cost-cutting and a choice of cladding Grenfell Tower had recently been fitted with which it has emerged is a type banned in America and would have  cost just £5,000 less than a safer alternative.

Meet the minds behind Y-Split: The best splitting app in the market