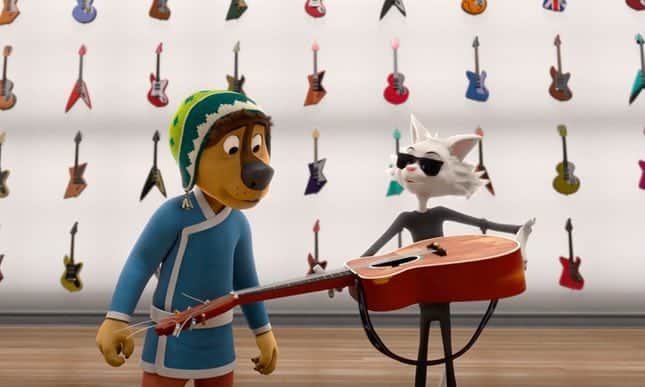 J.K Simmons, Eddie Izzard and Luke Wilson stars in Ash Brannon’s new animation feature about a Tibetan mastiff dog who dreams of becoming a rock star. This cute and thoroughly likeable movie does a good job in keeping you entertained, but is sadly let down by a less than accomplished screenplay. Dealing with themes of teenage awakening and adventure away from home, Rock Dog manages to be fun as well as moralising without ever resorting to cheap shots or crass humour.

The action take place in a remote village surrounded by beautiful idyllic snowy mountains, aptly named Snow Mountain. Bodi (Luke Wilson) is a young Tibetan Mastiff dog whose whole life revolves around helping his father Khampa (J.K. Simmons) look after the sheep who inhabit their village and defend them from a hungry pack a wolves ready to ponce on them at any minute. Unwilling to disappoint his father, Bodi does his best to learn the ropes, but he believes his true calling in life is to become a rock musician. When one day a radio falls from the sky into Bodi’s hands, the young Mastiff becomes obsessed by the music of Angus Scattergood (Eddie Izzard), a rock star cat whose music he hears for the very first time. Despite his earlier misgivings, Khampa eventually agrees to let Bodi travel to the city to make it as a musician.

Built around a three act narrative, Rock Dog does exactly what is expected of it, with perhaps way more exposition that is really needed. However, the film is at its best when it isn’t trying too hard to please its adult audience. The gags are a little on the predictable side, but there are some genuinely funny moments too. Simmons puts in a great performance as the harsh yet fair Khampa, and Izzard is magnificent and clearly in his element as the spoilt “mockney” spouting rock star who has very little time for our hero.

Rock Dog May not be groundbreaking, nor can it be seen as out of the ordinary, but with performances from a stellar cast and a great soundtrack to boot, the film is sure to please the audiences it is first and foremost aimed at. Helped by Denise Bradley screenplay, Brannon does a great job in developing this charming, if not completely convincing story. A great kids movie to start the summer, which is sure to please parents and children alike.

Rock Dog is in cinemas from Friday 16th June.