By Linda Marric To have a film based on Winston Churchill is one thing, to have it based on particularly dark episode in the mans’s life is another thing altogether. In Churchill Jonathan Teplitzky offers a historical biopic like no other. Spanning, not years, but rather a few days in the legendary figure’s life, the […] 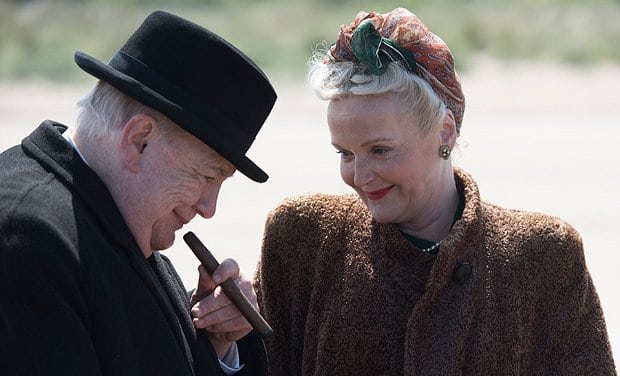 To have a film based on Winston Churchill is one thing, to have it based on particularly dark episode in the mans’s life is another thing altogether. In Churchill Jonathan Teplitzky offers a historical biopic like no other. Spanning, not years, but rather a few days in the legendary figure’s life, the film attempts to reconcile its audience with a story which shows the man in, perhaps, not the most positive of lights. Basing the story during the few days that preceded the D-Day landings, Teplitzky offers a decent enough premise, but the story is ultimately let down by a less than adequate screenplay and a style that sadly doesn’t quite translate naturally to the screen.

It’s June 1944 and 250,000 and allied forces are preparing to descend on Normandy beaches with Generals Bernard Montgomery (Julian Wadham) and Dwight Eisenhower (John Slattery) at the helm, but Britain’s most famous and respected Prime Minister (Brian Cox) has other ideas in mind. Scarred by the thousands of young men sent to their deaths in Gallipoli and the Somme a mere generation beforehand, Churchill doesn’t believe the Normandy invasion has been well thought out, and is determined to put a spanner in the works for those trying their hardest to get the D-Day landings on the way.

The film presents Churchill as a heavy-drinking, out of touch cantankerous old man, who has all but lost the power he had over his government an the army. Chastised by all those surrounding him, especially by his wife Clementine (Miranda Richardson), this once great man is offered as a pathetic loser who has burnt all his bridges including with those closest to him. John Slattery (Mad Men) puts in one of the greatest performances of his career as Eisenhower, a man who is as in charge of his emotions as he is of the war effort. Miranda Richardson is as brilliant as ever as the stern yet loving Clementine, but one the best performances comes courtesy of Ella Purnell who stars as the Prime Minister’s new secretary Helen, whose “deer in the headlights” turn perfectly balances Cox’s depiction of Churchill’s brutish and reprimanding attitude.

On the whole, Churchill suffers from far too much exposition and not enough historical content to make it compelling enough. Alex von Tunzelmann’s screenplay sadly lacks all the ingredients to make the story wholly believable. It’s hard to see how anyone can get excited about this particular storyline, but if you’re willing to ignore its shortcomings, the film offers an interesting enough story which many people might not be aware of. Disappointing, but not entirely terrible.

Churchill is in cinemas from Friday 16th June.