WIth her own party plotting to oust her if there is a lengthy delay to Brexit, though it has proved impossible to deliver a Brexit that delivers anything like its promises with another deadline looming, Theresa May issued a reassuring video. “Let me explain what is happening with Brexit,” the Prime Minister said in an […] 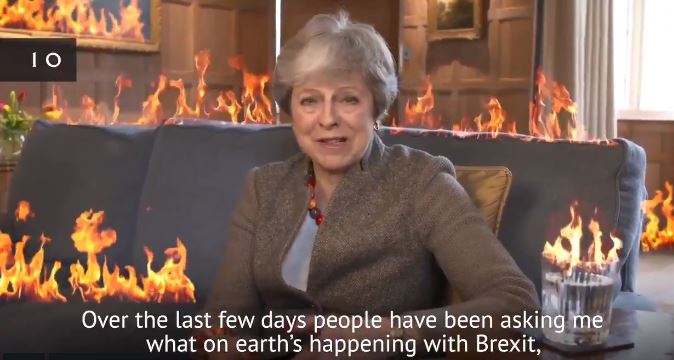 WIth her own party plotting to oust her if there is a lengthy delay to Brexit, though it has proved impossible to deliver a Brexit that delivers anything like its promises with another deadline looming, Theresa May issued a reassuring video.

“Let me explain what is happening with Brexit,” the Prime Minister said in an informal, chatty, video, shot shaky camera style, with her leaning on the arm of her as casually, propped up with a cushion as if any of what is going on is normal and she has any control over any of it.

“I think people voted to leave the EU, we have a duty as a Parliament to deliver that.” said May trying to beam with an air of normality, despite the passive aggressive message to her rebellious MPs. “I want to do that in a good way, that doesn’t disrupt people’s lives,” she added.

Or perhaps saw the video as almost a cry for help…

Or had much confidence in Theresa May’s Brexit strategy, despite her patronising tone of passive aggression…

Worryingly, it is not just the British people and MPs’ losing faith in Theresa May and the course Brexit is taking – which bears no resemblance to the promises of the Leave campaign nearly three years ago.

EU leaders too are losing patience. And when they meet on Wednesday they must decide whether to grant Theresa May’s request of an extension of Article 50 until June 30.

Or perhaps to follow EU council president Donald Tusk’s suggestion to offer the UK a Brexit delay of a year, but with a break clause for the UK to leave earlier, if – by some miracle – political and legislative agreement for a negotiated Brexit occurs earlier than that.

But whether they have any faith that May is capable of delivering this, EU leaders are even more uneasy about granting an extension, then May being replaced as PM by one of her more extreme wrecking ball colleagues – such as Boris Johnson or Dominic Raab.

God only knows what sort of memes would be appropriate then…