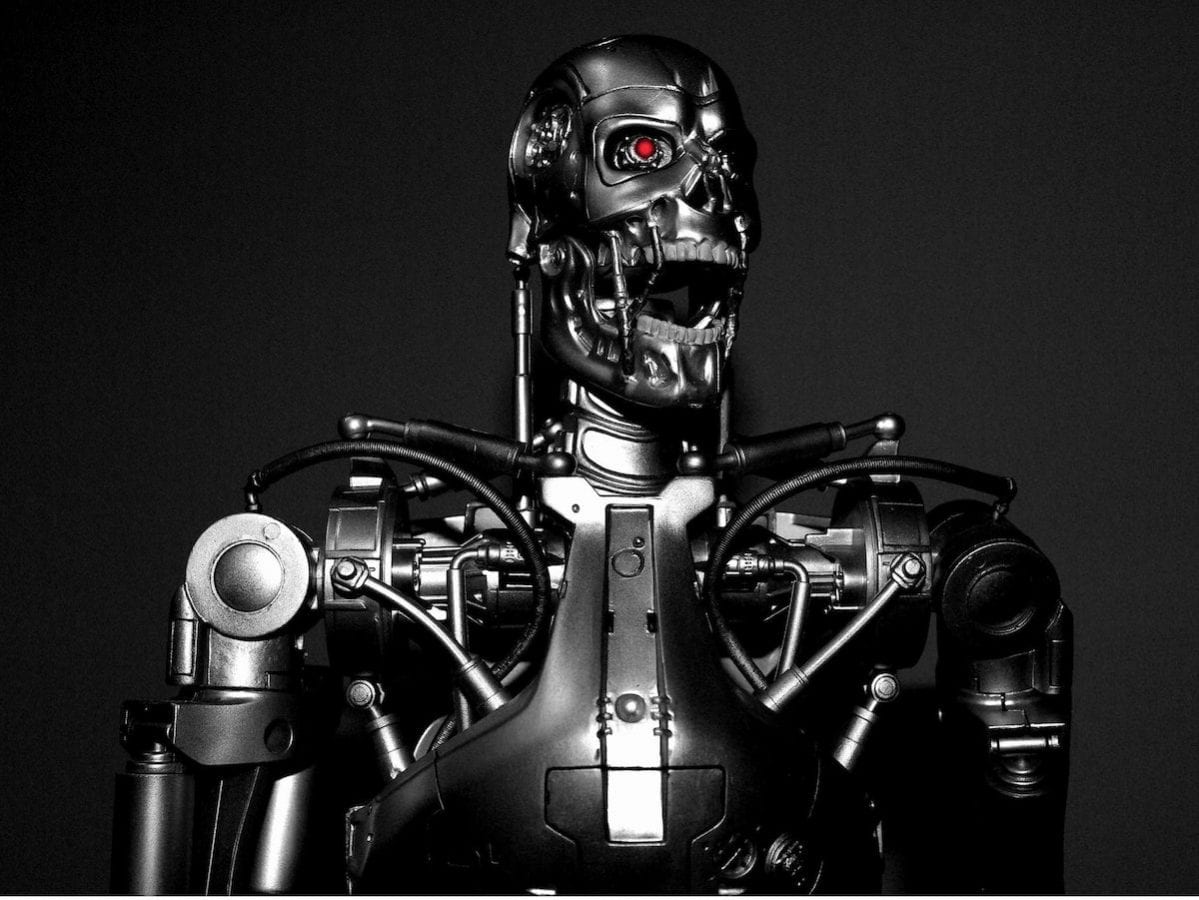 Terminator-style humanoid robots may be on the horizon thanks to ‘artificial muscles’ …. made from spider silk.

The wonder material – stronger than steel and more elastic than rubber – can be harnessed for power, say scientists.

It just requires the right amount of moisture.

Above a certain level of relative humidity in the air, they suddenly contract and turn, according to new research.

This exerts enough force for them to work as actuators – devices that move to perform activities such as controlling a valve.

Known as ‘supercontraction’, the slender web strands shrink in response to changes in the atmosphere.

What is more, they also have an astounding ability to twist at the same time – providing a strong torsional force.

The effect reported in Science Advances is similar to the action of muscles – offering hope of super-strong machines for manufacturing or soft robots to care for the elderly.

It could also lead to smart clothing, also known as E-textiles, that enable computers and electronics to be embedded – and green generators.

Professor Markus Buehler, head of the department of civil and environmental engineering at Massachusetts Institute of Technology, said: “It’s a new phenomenon.”

Spider silk is tougher than any man-made material. If made into body armour, it would be three times stronger than Kevlar – used in bullet proof vests.

It has already found a number of uses – from fishing lines to wound dressings as it also has antibacterial properties. Like hair, it is made of protein.

Co author Claire Hsu, an undergraduate in Prof Buehler’s lab, said the international team stumbled on the discovery by chance.

She said: “My colleagues and I wanted to study the influence of humidity on spider dragline silk.”

Spiders use a dragline of silk, the strongest form, to stabilise themselves mid-air and control their landings.

The researchers suspended a weight from the silk to make a kind of pendulum – then enclosed it in a chamber where they could control the relative humidity inside.

Explained Ms Hsu: “When we increased the humidity, the pendulum started to rotate. It was out of our expectation. It really shocked me.”

The team tested a number of other materials, including human hair, but found no such twisting motions.

The possibility of artificial muscles came to them at once – as a novel way of controlling certain kinds of sensors or control devices.

Prof Buehler said: “This could be very interesting for the robotics community. It is very precise in how you can control these motions by controlling the humidity.”

A number of teams around the world are working to replicate spider silk’s exceptional strength-to-weight ratio, flexibility and resilience in a synthetic version.

Prof Buehler believes the twisting motion has evolved to make sure the web is pulled tight in response to morning dew.

This would protect it from damage and maximise its response to vibration for the spider to sense prey.

But lab experiments and computer models showed the mechanism is based on the folding of a particular kind of protein building block, called proline.

With it in place, the twisting always occurred in the molecular simulations. Without it, there was no twisting.

Co author Prof Dabiao Liu, of Huazhong University of Science and Technology, Wuhan, China, said: “Spider dragline silk is a protein fibre. It is made of two main proteins, called MaSp1 and MaSp2.”

The proline, crucial to the twisting reaction, is found within MaSp2. When water molecules interact with it they disrupt its hydrogen bonds in an asymmetrical way.

This causes the rotation. It only goes in one direction, and takes place at a threshold of about 70 per cent relative humidity.

Prof Buehler said: “The protein has a rotational symmetry built in.” And its torsional force makes possible “a whole new class of materials.”

Now the property has been found it opens the door to a synthetic spider silk that does exactly the same thing.

He said: “Maybe we can make a new polymer material that would replicate this behaviour.”

But robots fitted with this new tissue would be freed up to move around like humans, enabling them to better grip and pick up objects.

The plan is to eventually get them to help in a range of tasks – from non-invasive surgeries to helping out in care homes.

Prof Anna Tarakanova, formerly of MIT and now at the University of Connecticut, said: “Silk’s unique propensity to undergo super contraction and exhibit a torsional behaviour in response to external triggers such as humidity can be exploited to design responsive silk based materials precisely tuned at the nanoscale.

Other natural materials may also exhibit this property – but, if so, this hasn’t been noticed.

Added Prof Buehler: “This kind of twisting motion might be found in other materials that we haven’t looked at yet.”

In addition to possible artificial muscles, the finding could also lead to precise sensors for humidity.

Real spider silk can only be gathered in minute amounts. Spiders are very difficult to farm. They are predatory and will readily resort to cannibalism in the absence of other prey.

Individual spiders have been captured and forcibly silked in laboratory conditions but the quantities recovered are tiny.

Spiders produce only small amounts of silk, spinning only what they need for a web, then consume it to re-use the protein.

So far, no one has been able to artificially spin spider silk fibres with mechanical properties indistinguishable to those made in nature by a spider.

But if we could, all these ideas on how to use spider silk in diverse applications could come true.

Making spider silk artificially is possible now scientists understand more about how it is made by the humble, eight legged creepy crawly.