He offered an explanation: “The situation was, funnily enough it was tractors I was looking at, so I did get into another website with sort of a very similar name and I watched it for a bit, which I shouldn’t have done." 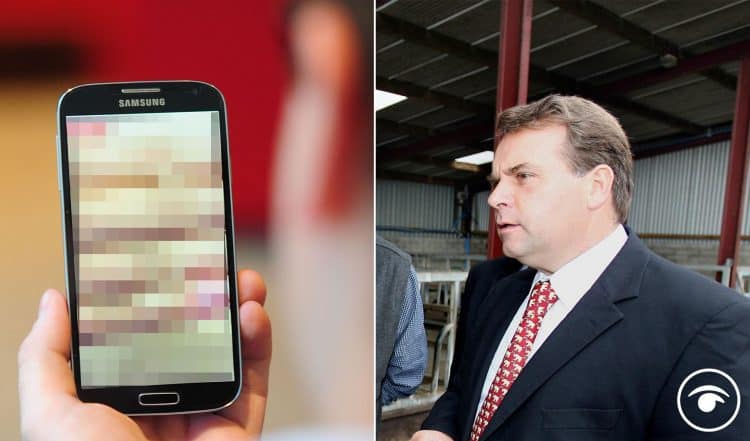 Suspicion was cast over innocent Tories and a stream of damaging headlines were printed in the four days between claims of a porn-watching MP being aired and Neil Parish’s resignation.

The senior backbencher’s initial silence, followed by insistence he would stay in the job after he was unmasked, have all helped prolong the torrid affair for the Conservatives.

Criticism has also been aired at the Tory whips for taking days to suspend him, and all this in the run-up to the local elections.

It was a meeting of female members of the Conservative 2022 group in Westminster on Tuesday night when the shocking allegation was shared.

One of them, a minister, said she had also seen him viewing adult material in a committee meeting.

Reporters learned of the allegations the following morning, but not the name of the culprit, with the Conservatives keeping that quiet.

Amid demands for firmer and faster action, the Chief Whip called for the case to be referred to Parliament’s Independent Complaints and Grievance Scheme (ICGS).

The watchdog that investigates allegations of harassment and sexual misconduct went on to open an investigation after a referral from at least one of the witnesses.

Women in Parliament came forward to decry the “shameful” culture at the heart of British democracy, with Attorney General Suella Braverman saying some men act like “animals”.

International Trade Secretary Anne-Marie Trevelyan described once being “pinned up against a wall” by a former MP.

Among those being asked about the scandal was Mr Parish himself, during an interview with GB News.

He was non-committal on whether the MP in question, which unbeknownst to viewers was the man on their screen, should be thrown out of the parliamentary party.

Mr Parish instead insisted the whips would “do a thorough investigation” before denying there was a large cultural problem in Westminster, contrary to what his colleagues said.

“We’ve got some 650 Members of Parliament in what is a very intense area,” he told the interviewer.

“We are going to get people that step over the line. I don’t think there’s necessarily a huge culture here but I think it does have to be dealt with and dealt with seriously and that’s what the whips will do.”

Then on Friday, the Telegraph approached the Conservatives saying it was preparing to reveal that it was Mr Parish at the centre of the allegations.

Mr Heaton-Harris released a statement saying he was suspending the Tory whip from the 65-year-old MP for Tiverton and Honiton.

After the pair met, Mr Parish said he would refer himself to Parliamentary Standards Commissioner Kathryn Stone for investigation.

He released a statement vowing he “will continue to perform my duties” as an MP while “co-operating fully with any investigation”, but faced demands to stand down immediately.

Journalists tracked Mr Parish down to his Somerset farmhouse, where his wife Sue Parish learned of the news from a reporter and both faced uncomfortable questions.

Mrs Parish said “it was all very embarrassing” as she defended her husband: “He’s quite a normal guy, really. He’s a lovely person. It’s just so stupid.”

Rather than readily volunteering an explanation, Mr Parish gave a hint while under sustained questioning from reporters.

Asked if he had opened something in error in the Commons, he said: “I did, but let the inquiry look at that.”

Mr Parish reiterated he would only be resigning after the investigation is complete, in the event he is found guilty of breaching the rules.

He would even speak of his relief about the allegations surfacing, telling the Telegraph in an interview while wearing his dressing gown that “it’s almost as if a weight is lifted off me”.

But on Saturday that pressure was firmly back on.

A Conservative source told the PA news agency it was “likely” that Mr Parish would now be resigning within hours, with a second local source suggesting allies in Westminster were urging him to quit. Party sources said that pressure was not coming from Conservative HQ.

A farmer by trade, Mr Parish made his announcement in an emotional but nevertheless bizarre interview with BBC South West, saying he recognised the “furore” and “damage” he was causing.

And he offered an explanation: “The situation was, funnily enough it was tractors I was looking at, so I did get into another website with sort of a very similar name and I watched it for a bit, which I shouldn’t have done.

“My crime, my most biggest crime, is that on another occasion I went in a second time, and that was deliberate.

“That was sitting waiting to vote on the side of the chamber.”

That was a “moment of madness”, he conceded.

His resignation will trigger a by-election in the Devonshire constituency that is historically safe for the Tories. The Liberal Democrats will relish the chance to snatch it though.

He will continue to face an investigation by the ICGS, and questions as to why he did not save the Tories’ blushes in the run-up to Thursday’s local elections by resigning days earlier.