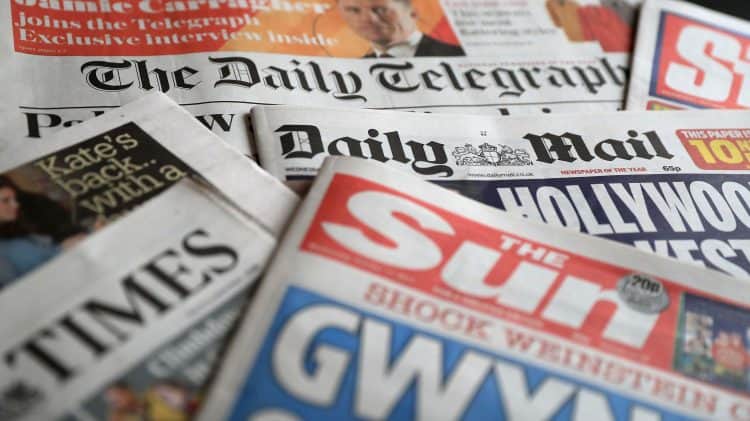 Moran encouraged his 40,000 followers to abuse a palliative care doctor who posted about the importance of wearing masks on public transport to stop the spread of Covid-19.

He wrote: “She deserves to be verbally abused in public for the rest of her worthless existence. They all do.”

Doctor Rachel Clarke responded to Moran, saying: “Why do you employ a man who openly abuses NHS staff, @telegraph?”

Moran replied: “Why do you employ a woman who promotes disgusting ideologies, without moral or scientific justification, which lead to the deaths of children, @NHSEngland? This is pure, unspeakable evil and you appear to condone it.”

Clarke asked the Twitter community to “crowdfund legal action” against Moran – suggesting the cartoonist “openly defamed me, an NHS palliative care doctor, as well as incited hate and abuse”.

Her tweet gained a huge wave of support – including from LBC broadcaster James O’Brien.

The British Medical Journal joined in, tweeting their support of Clarke: “This is appalling to hear Rachel – this is completely unacceptable and should not be tolerated; there should be consequences for abusing NHS staff like this.”

According to Press Gazette, the Telegraph now plants suspend Moran – whose past tweets have included derisions of vaccinated people as “dangerously misguided” and suggestions the NHS was not being honest about pressure on hospitals.

He was challenged on Twitter by fellow Telegraph journalist Bill Gardner in January, who wrote: “Very serious allegations, so I imagine you must have strong evidence that the NHS is ‘lying’. Feel free to pass across. Usual work email. Thanks.”

It comes as more than four in five university students had received at least one Covid-19 vaccination by August, a survey suggests.

The figure is now likely to be “considerably higher”,  the National Union of Students (NUS) has said, as a further one in 10 said they intended to have a vaccine as soon as possible.

The survey, of more than 5,000 students between July and August, suggests that three in five (60 per cent) students who are moving into halls of residences are concerned about living with others.

This is partly down to a fear of catching Covid-19 and others not following rules and good hygiene, according to the NUS poll.

Amongst students who will be in halls of residences, nearly two in three (64 per cent) agree that all students moving into shared accommodation should get tested for Covid-19 in advance, whilst 11 per cent disagreed.