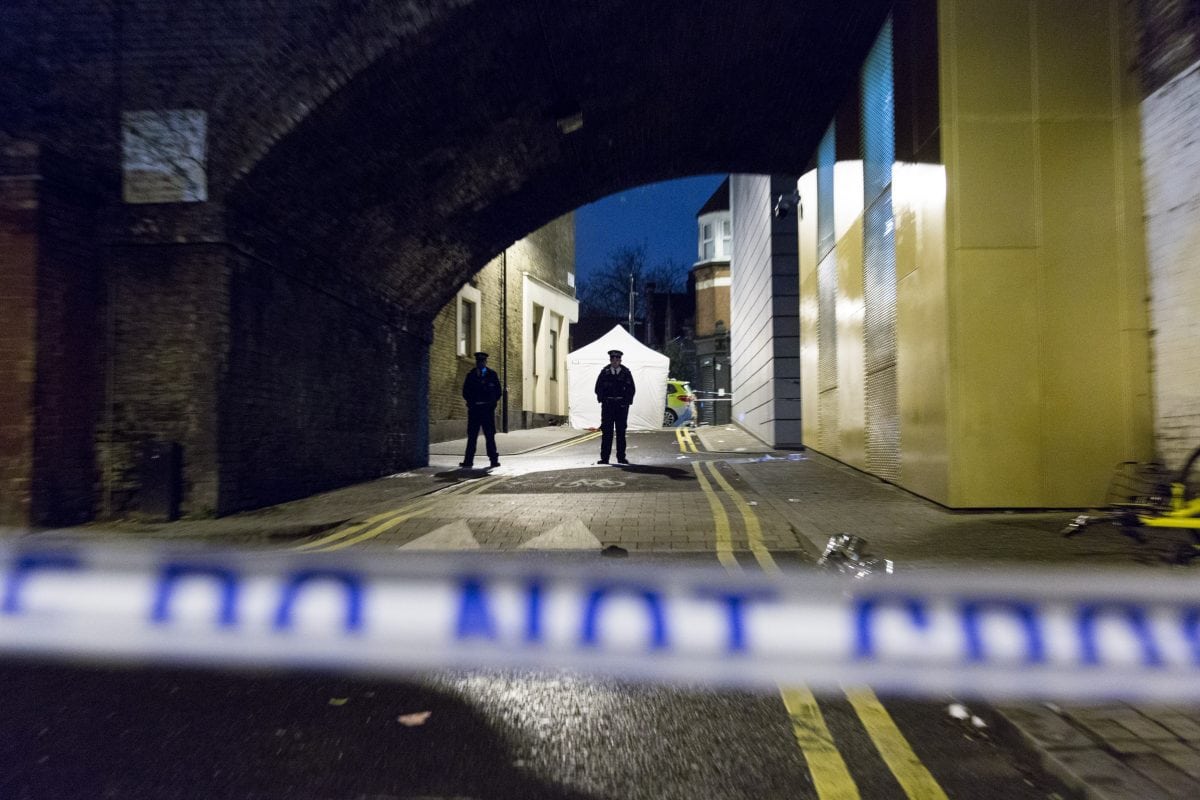 A teenager was chased through the streets by a lone knifeman before he was murdered last night.

The 18-year-old ran through a park behind Inner London Crown Court before he was stabbed by the hooded attacker near the Elephant and Castle in south London.

He was found with stab wounds in Tiverton Street around 9.30pm.

He was treated by an air ambulance doctor but died nearly an hour and a half later in hospital.

DCI Richard Leonard said: ““We need those who have information about the culprit(s) for this murder to get in touch with police immediately.

“The victim was seen being chased by another male wearing a grey or blue hoody from Newington Gardens into Tiverton Street where he was attacked and shortly after found by police and London Air Ambulance.

“Were you there? Did you see anything? Your information could prove vital to solving this case and I would urge you to get in touch.”

A spokesperson added: “A murder investigating is underway following the fatal stabbing of a teenager in Southwark.

“Police were called by the London Ambulance Service on Sunday, 5 May at around 9.30pm to reports of a stabbing on Tiverton Street.

“Officers attended along with London’s Air Ambulance and found a man, aged 18, suffering from stab injuries.

“He was taken to a south London hospital where he died at 10.51pm

“His next of kin have been informed. A post-mortem examination will be held in due course. Formal identification awaits.

“The Homicide and Major Crime Command has been informed and will be leading on this investigation under DCI Richard Leonard.

“There have been no arrests at this time. A number of active enquiries are in hand including review of local CCTV footage, house to house calls and forensic analysis at the scene.”

The teenager was the second person to be murdered on the capitals streets so far this weekend.

A 52-year-old man was deliberately run over by a driver following an argument in Leytonstone at 0.40am on Sunday.

He died in hospital just after 5.15pm while another man, 32, remains in hospital with serious injuries which are not life threatening.

Detective Chief Inspector Mark Wrigley said: “ At this early stage, it is appears that this was a deliberate act by the driver of the car.

“There had been an altercation in the street prior to this incident and I am appealing for any witnesses or anyone with information who has not yet come forward, to contact police.”

A spokesperson added: “A murder investigation has been launched after a man died following a collision in Leytonstone.

“Police were called at 0.40am on Sunday, 5 May to reports of a car in collision with two pedestrians on High Road in Leytonstone.

“Victim 2 who was in a critical condition, died in hospital at 5.18pm on Sunday, 5 May.

“His next of kin have been informed and a post-mortem examination will take place in due course.

“Victim 1 remains in hospital with serious injuries which are not life threatening.

“Officers from the Homicide and Major Crime Command (HMCC) are investigating.”

Armed police along with local officers were sent and the three were treated by paramedics before being taken to hospital.

The 23-year-old and 30-year-old remain in a stable condition and their injuries are not life threatening.

The 29-year-old has been discharged.

Detectives from Scotland Yard’s Trident and Area Crime Command are investigating and no arrests have been made.

A spokesperson said: “Detectives continue to investigate a shooting incident in Leyton on Saturday night and are appealing for anyone who has information to get in touch.

“Police were called on Saturday, 4 May at 8.50pm to reports of shots fired on Leyton High Road, junction with Leyton triangle.

“They were treated at the scene by paramedics before being taken to hospital.

“The men aged 23 and 30 remain in a stable condition; their injuries are not believed to be life-threatening.

“The man aged 29 has been discharged.

“Detectives from the Trident and Area Crime Command are investigating.

“A number of active enquiries are in hand including local CCTV analysis, forensic testing and police are speaking with local people door to door.

“There have been no arrests at this stage.”