'Can it be flimed at Pizza Express in Woking?' said one Twitter user. 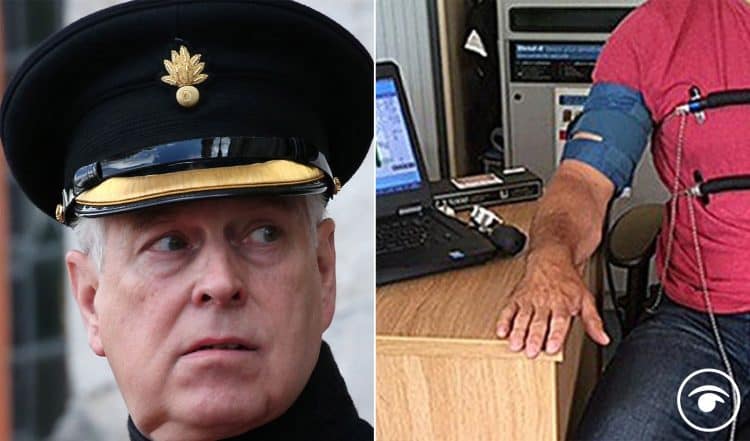 Prince Andrew faces an “uphill struggle” to combat the impact of the sex offences allegations made against him and has already lost in the court of public opinion, leaving his reputation “highly tarnished” and a return to royal duties impossible, experts have said.

The Duke of York may never return to the “royal fold” as a working member of the monarchy following Virginia Giuffre’s decision to sue the Queen’s son for alleged sexual assault, a royal expert has said.

Andrew faces the prospect of Ms Giuffre giving her detailed account in open court about allegations the duke had sex with her while she was underage.

Ms Giuffre claims she was trafficked by Andrew’s former friend and convicted sex offender Jeffrey Epstein when a 17-year-old to have sex with the royal, and said it was “past the time for him to be held to account”.

One way he could clear his name is to take a lie detector, but can he even sweat?

Investigative journalist, filmmaker and New York Times bestselling author Ian Halperin has made the offer to the Prince to “clear his name” by undergoing a lie detector test “with a world-leading polygraph examiner.”

Halperin told Daily Mail: “It will be a pay per view event, hopefully the biggest pay per view in history, where Andrew gets $100million for just turning up and taking the test.

“If he is as innocent as he says he is, he passes and it clears his name. It is a great way for him to vindicate himself in 45 minutes.

“So it is a win-win for him and he would be able to make a donation to victims of child sex trafficking. It would make him look great. If he is hiding nothing then he should do it.

“Nobody has ever made that amount of money for 45 minutes work. And we will provide him with hair and make-up!

“I am open-minded about the result. I leave the door open for him to clear his name. I am bypassing this ‘he says, she says’ and cutting to the chase. A polygraph test will be 99.999 percent accurate.”

Can it be flimed at Pizza Express in Woking?

“Previously on the real housewives of the UK royal family” https://t.co/PsxmUUmrsx

If you had nothing to hide, knew you were innocent & you could make $100m for 45min work, surely you would do it

Prince Andrew should take the lie detector test.
It could clear his name and he can donate the £75million to a charity for victims of sexual abuse https://t.co/WmUqvLUO57