“Channel 4 costs the UK taxpayer precisely nothing, yet gives us a thriving independent production sector, thousands of jobs and world-renowned, innovative content." 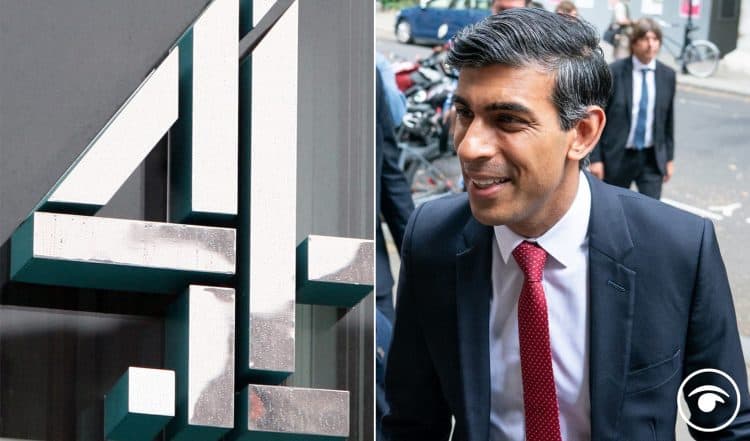 Rishi Sunak will proceed with the sale of Channel 4 if he succeeds Boris Johnson as prime minister – saying privatisation would help the broadcaster compete with streaming giants.

The former chancellor is locked in a leadership race with Liz Truss to become the next Conservative Party leader and PM.

Plans to take Channel 4 out of public ownership, announced earlier this year, have been criticised by the creative industry and politicians.

Channel 4 privatisation plans have come under fire again after it published its report showing its strongest ever financial performance.

Revenues topped £1 billion for the first time in its history and it enjoyed a record-breaking tax surplus of £101million.

The Government is seeking to privatise Channel 4, arguing that it will struggle to survive in a media landscape increasingly dominated by big streaming giants such as Netflix and has an overreliance on declining TV advertising to support its business.

“Channel 4 is a crucial part of British broadcasting and supports our brilliant creative industries, but a lot has changed since the 1980s when it was set up to provide viewers with more choice.

“Privatisation will help Channel 4 to thrive in an age where they are also competing with Netflix, Amazon, Apple and many more.

“Standing still is not an option.”

Philippa Childs, head of broadcasting union Bectu, described the announcement as “incredibly disappointing” and said it suggests Mr Sunak “does not understand why the Channel 4 model is so successful and why there is such unified and vehement industry opposition to the sale”.

She said: “Channel 4 is a hugely successful public service broadcaster, consistently pushing the boundaries of entertainment and thought-provoking content for British audiences.

“This success is built on the back of the current model, which supports a thriving independent production sector and allows commissioners a degree of risk and creativity, of which the viewing public reap the benefits.

“Make no mistake – privatisation which will have major consequences for the UK broadcasting landscape, for the jobs of UK freelancers and for the UK’s creative economy.”

She added: “Channel 4 costs the UK taxpayer precisely nothing, yet gives us a thriving independent production sector, thousands of jobs and world-renowned, innovative content.

“Once again we see that this Government seems determined to deal in ideology rather than fact when it comes to our world-renowned cultural assets. We will continue to fiercely oppose this destructive move.”

Also, a Tory from the right of the party has called Sunak a version of Gordon Brown.

John Redwood tweeted: “Rishi Sunak says he wants to become a Thatcherite. In office he was a Gordon Brown tribute act.”

Related: Watch: Tory MP explains why Sunak should be next PM but is debunked in viral video