Brexit ‘divorce’ bill goes up to £42.5 billion and people can’t see sunlit uplands over pile of cash we owe – reactions

"Glad this is us holding all the cards, otherwise this would be a monumental waste of money," wrote Toby Earle. 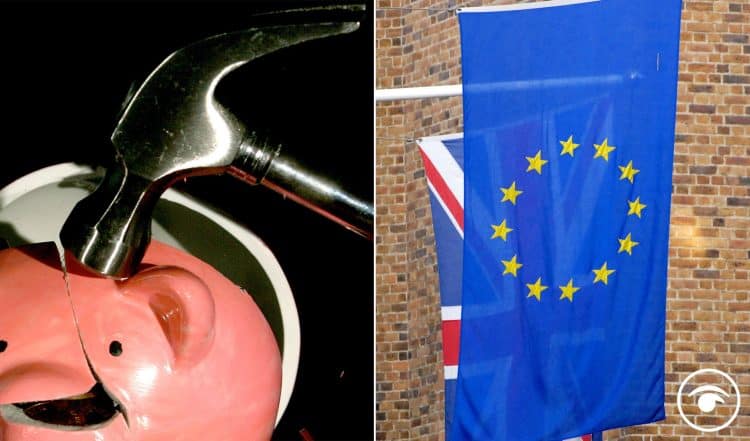 Today the European Commission has launched four new legal actions against the UK government for breaking parts of the Northern Ireland Brexit deal, taking it to seven active actions in total.

The EU argued it was forced to act because the UK has been unwilling to take part in “meaningful discussion” over the protocol since February.

It also struck out again at the controversial Northern Ireland Protocol Bill that is making its way through Parliament, which the bloc says breaks international law.

Also, there is a ‘critical incident’ has been declared by the Kent port due to six-hour queues, with tourists urged to consider staying away.

One Twitter user wrote shortly before 7am that there was “total gridlock”, while another said they had been “waiting five hours and still not in the port”, adding: “Sat in lanes waiting to get to border control. Zero movement.”

Sorry, there is more as the UK’s Brexit divorce bill could soar to £42.5 billion after the Treasury increased its estimate of the payments owed to the European Union by more than £5 billion.

Originally the Government estimated the bill covering spending commitments made during the 47 years of the UK’s membership of the bloc would be between £35 billion and £39 billion.

A Treasury spokesman added: “The unprecedented recent rise in inflation and changes in discount rates have increased our pensions liability, which is the biggest reason for the increased estimate.

“The true cost of the settlement is confirmed when payments are made, based on the value at the time. The Treasury continues to monitor and verify these payments in line with the negotiated agreement.”