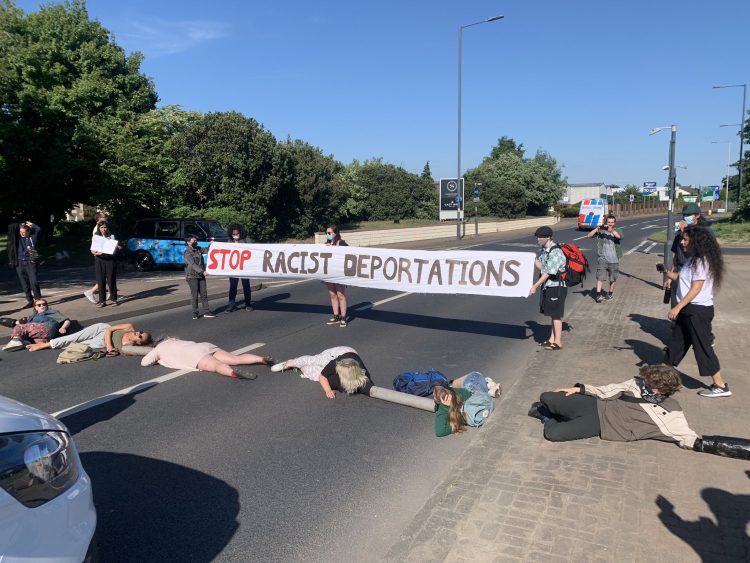 Stop Deportations protestors have locked themselves together with metal pipes and blockaded exits of Immigration Removal Centres (“IRC”) ahead of a controversial deportation flight to Rwanda, expected to leave the UK this evening.

An aircraft which is believed to be taking the first refugees landed at a military base in Wiltshire on Tuesday morning.

The Boeing 767, registration EC-LZO, is owned by Spanish airline Privilege Style and flew from Dusseldorf to the military base in Amesbury, Salisbury, ahead of its expected departure.

The aircraft is 27 years old and capable of carrying around 200 passengers.

Just seven people are due to be on board the flight after a number were removed following legal challenges and reviews by the Home Office – of those seven, lawyers representing three are seeking an order to prevent their removal to Rwanda.

Stop Deportations activists have sought to stop the deportations by taking action themselves.

In a statement, the group said: “This policy is the result of years of portraying migrants as less than human beings; it makes it possible for the Home Office to inflict pain on them and get away with it. We, the public refuse to accept the Home Office’s cruel, inhumane and unlawful plans.

“No one should be on this flight. No one should be deported under such racist and discriminatory policies. It’s clear we cannot trust the courts to give us true justice and prevent this racist, fascist deportation, so that’s why we have taken action. No deportations, not to Rwanda or anywhere else.

“We cannot rely on the courts or politicians to stop this violent border regime, which is why so many of us are coming together to take direct action against immigration enforcement.

“We have shown up in our hundreds to stop immigration raids in our communities, in Scotland and in London. We have taken to the streets in mass protest against this Government’s vile immigration laws and policies.

“We have stopped coaches and planes in their tracks to resist deportations. We will continue to build power and solidarity as Black, Brown and Racialised people are targeted by borders, prisons and police – because we must now organise to counter this fascist Government with love, care and community.”

“I’ve been an anti-war and climate activist for the last four years and this flight represents the very worst of government legislation regarding refugees. People are fleeing war, persecution, drought and famine.

“With the worsening climate crisis, climate refugees will need a safe place to go to when mass crop failure means people cannot feed their families, which is already happening in Yemen. We must act as if this is the early days of a fascist government willing to dehumanise people for votes, because that’s where we’re at​​​​​​​.”​​​​​​​