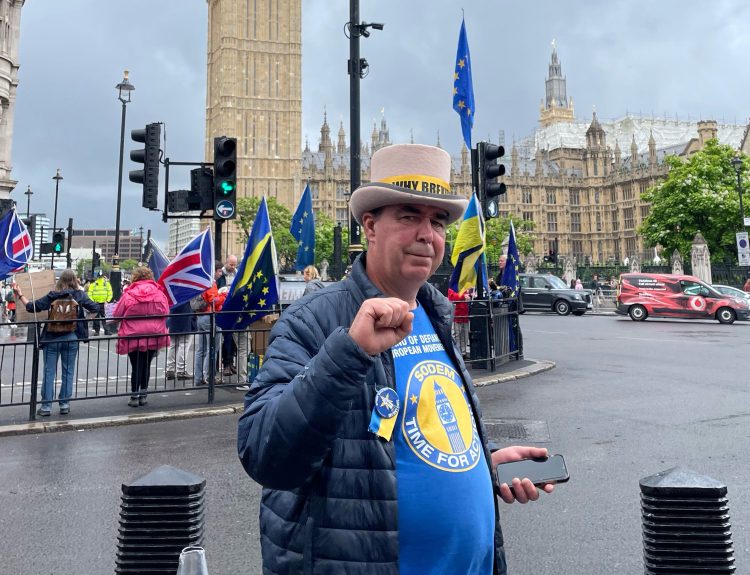 An anti-Conservative activist returned to Parliament Square vowing to stage a protest “twice as loud” a day after his amplifiers were seized by police.

“Stop Brexit Man” Steve Bray blared several songs at the Houses of Parliament on Wednesday before officers again threatened to take his equipment.

Mr Bray told the PA news agency: “I’ve got more amps on order and I’m going to link four amps together – not this week, maybe next week – and it’ll be twice as loud as it was here to compensate for the move to the corner.

“In fact I’m going to wire eight together.”

One of the songs he played was the 1975 Bay City Rollers song Bye Bye Baby overlaid with the lyrics “bye bye Boris”, as another protester banged a tin and dared officers to “arrest me”.

Mr Bray later moved to another spot with his amplifier under an arch outside the Houses of Parliament gift shop, where he said police intervened quoting the Highways Act.

“He’s saying this is a public right of way but so is that island over there, so is anywhere where people protest – I think he’s got it wrong,” Mr Bray said.

On Tuesday, the Metropolitan Police said Mr Bray had been reported over the offence, meaning he will be considered for prosecution.

“Yesterday it was very intimidating, they were following me everywhere,” he said.

“We’re just here to show our dissent to this Government and we are a protest, we will be noisy. Protest is about sound and vision.”

Considering ways to avoid having his amplifiers seized again, Mr Bray said: “Maybe I’ll strap that to my back, but it’s heavy, or get on a bike.

“We’ll get a rickshaw and we’ll have a little whizz around.”

The small group of demonstrators waved EU flags and held placards and EU umbrellas on a rainy day in Westminster.

Mr Bray is known as the Stop Brexit Man because he is often in the area playing loud music and using a megaphone to shout “Stop Brexit”.

Officers on Tuesday said the equipment was being seized under section 145 of the Police Reform and Social Responsibility Act 2011, which was extended to a wider area around the Houses of Parliament that day.

Amnesty International said the “deeply authoritarian new policing laws are a charter for the suppression of legitimate protest” and called it a “dark day for liberty in our country”.

More than 6,000 contributions have been made in the 99 weeks since the page was created.