The Deputy PM winked while questioning the deputy Labour leader on her stance on the RMT rail strikes. 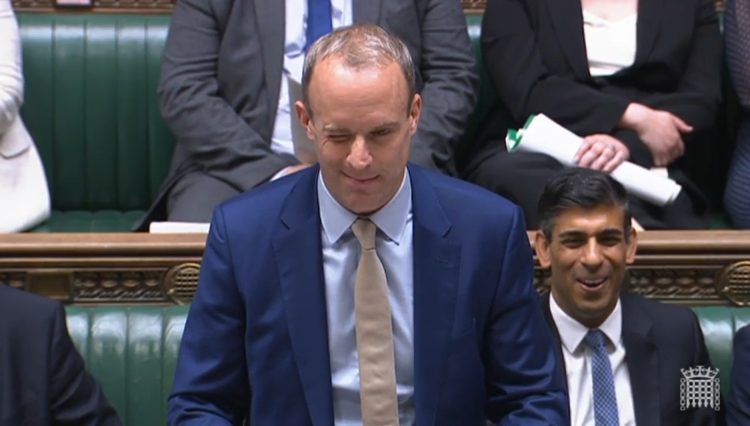 Dominic Raab winked at Angela Rayner as he mocked her over train strikes – before suggesting the Labour deputy leader is a “champagne socialist” for attending opera.

The Deputy Prime Minister’s actions in the Commons were labelled “bizarre”, while Labour MP Toby Perkins (Chesterfield) tweeted: “I will never unsee Dominic Raab’s wink from the despatch box at Angela Rayner. I feel soiled.”

Ms Rayner replied on Twitter: “Imagine how I feel!”

The moment came after Ms Rayner had quoted Mr Raab’s past view that people who use food banks “simply have a cash flow problem”.

She added in the Commons at Prime Minister’s Questions: “He doesn’t. He spent over £1 million in nine months on private jets, it shows how out of touch this Government is.

“At this rate, by 2030 a million more people will be using food banks. How many more working people will be pushed into poverty by his Prime Minister before he says enough is enough?”

Mr Raab replied: “If the Labour Party, if she wants to help working people, they should be clear in standing up against these militant, reckless strikes.”

He accused Ms Rayner of having “flip-flopped” in her position on the strikes, adding: “First she said they were lose-lose, then she tweeted workers were left with no choice.

“When she was asked by the BBC – a straight question, she’s normally a straight shooting politician – do you like the RMT, she said ‘I’m going to have to go now, I’ve got a train to catch’.”

As he paused, Mr Raab winked before noting: “She talks about working people. Where was she when the comrades were on the picket line last Thursday?

“Where was she when the Labour frontbench were joining them rather than standing up for the public?

“She was at the Glyndebourne music festival sipping champagne, listening to opera. Champagne socialism is back in the Labour Party.”

Ms Rayner replied: “That says a lot about the party opposite, I’ll tell him a few things about militancy, it’s this Government that are acting in a militant way.”

Downing Street later insisted that Boris Johnson wants “everybody” to enjoy arts and culture after Mr Raab’s jibe at Ms Rayner for attending the opera.

A No 10 spokesman said: “The Prime Minister is clear that everybody should be able to enjoy arts and culture, and other such things across the UK.”

Mr Raab and Ms Rayner took part in PMQs due to Mr Johnson’s attendance at a Nato summit.

Elsewhere in their exchanges, Ms Rayner lampooned Mr Raab for his handling of the Afghanistan crisis last summer as the Taliban swept to power.

Ahead of Prime Minister’s Questions, Ms Rayner tweeted a photo of her panda-heeled footwear for the occasion.

She wrote: “I know Dominic Raab is a karate black belt and everything – but I’ve got my kung fu pandas on and I’m ready!”