Laila Laurel, 23, won a major award after she created the piece of furniture to stop men from widening their legs and encroaching on other people's personal space 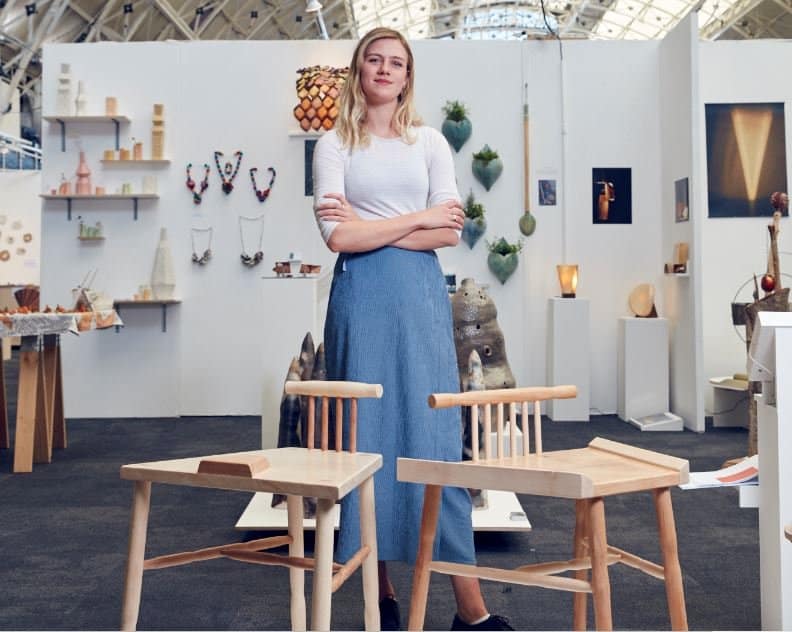 Laila Laurel, 23, won a major award after she created the piece of furniture to stop men from widening their legs and encroaching on other people's personal space.

A female university student who designed an award-winning chair to stop “man-spreading” is being trolled by men who have threatened to rape her.

Laila Laurel, 23, won a major award after she created the piece of furniture to stop men from widening their legs and encroaching on other people’s personal space.

She built the chair after she was fed up with men “infringing on her public space”.

The design shows two bits of wood which are cleverly positioned on the seat to physically stop whoever is sitting down from moving their legs apart.

However, since receiving the Belmond Award at New Designers in London, a major showcase of work from universities across the UK – she has received “unpleasant backlash”.

She says she has been sent unsolicited photos of male genitals aswell as receiving rape threats.

The 3D Design and Craft student from the University of Brighton said: “I have received a lot of explicit messages from men who seem to be under the impression that I hate all men.”

But she said it “couldn’t be further from the truth frankly”.

She said: “I am getting a lot of comments on my Instagram page and lots of people are sending me private messages, they are mostly men.

“I am just getting a lot of pictures of men’s genitals.

“It isn’t nice and it just bizarre behaviour.

“I am also getting explicit messages, threatening me about rape.

“Most of them are men in their late 30s or 40s, it is just really bizarre

“Some are cropped pictures, I have stopped looking now. Honestly I don’t know what is going on the world.

“There is obviously a really big problem.”

The word ‘man-spreading’ was added to the Oxford English Dictionary in 2015 following an online campaign against the practice since 2013.

The dictionary definition is the ‘practice of a man sitting on public transport with his legs wide apart, taking up more space than he needs and preventing other people from sitting down’.

Laila said the reaction from those who used the chairs was “brilliant and interesting”.

She also made a second chair intended for women which encourages sitters to push their legs apart.

Laila added: “I guess I think people are annoyed that I made the female chair with the legs closed.

“The reason that I made those was to challenge the way how women and men think and to spark a conversation. Which I have definitely done.

“I think on one hand talk social issues.

“I don’t take myself too seriously, because for I really want my work to be both important and thought provoking, whilst also being engaging and funny.

“I think humour is a really interesting tool in order to tackle social issues.

“I think because I know my intent wasn’t to degrade anyone, I am OK.”

She said she was also inspired by the ‘The Everyday Sexism Project,’ founded by Laura Bates, which collects women’s daily experiences of gender inequality.

Ms Laurel’s prize includes a £1,000 bursary and the chance to design a product for a hotel and leisure company.

Speaking about her inspiration, Laila said: “It came from my own experiences of men infringing on my space in public.

“With my chair set I hoped to draw awareness to the act of sitting for men and women and inspire discussion around this.”

The student said she was “shocked”, “happy” and “honoured” to win the Belmond Award for her work, which is called ‘A Solution for Manspreading’.

The panel of judges said Laila’s work was “a bold, purpose-driven design that explores the important role of design in informing space, a person’s behaviour and society issues of today”.

Laila, originally from Norwich, Norfolk, has also made a second seat intended for women which, via a small piece of wood in the middle, encourages sitters to extend their legs wider apart.

Senior lecturer in architecture and design at the University of Brighton Dr Eddy Elton said he was “proud” of his student’s achievement.

He added: “Over the past month our students and staff have come together to work tirelessly on its design.

“Winning the award at such a prestigious event, which is recognised by the professional design community, was an amazing achievement for our students and university.

“Seeing our students being called to the stage to receive this award is something I will be forever proud of.”