“The excuses wore thin a long time ago and every time they kill again their excuses get more and more unbelievable." 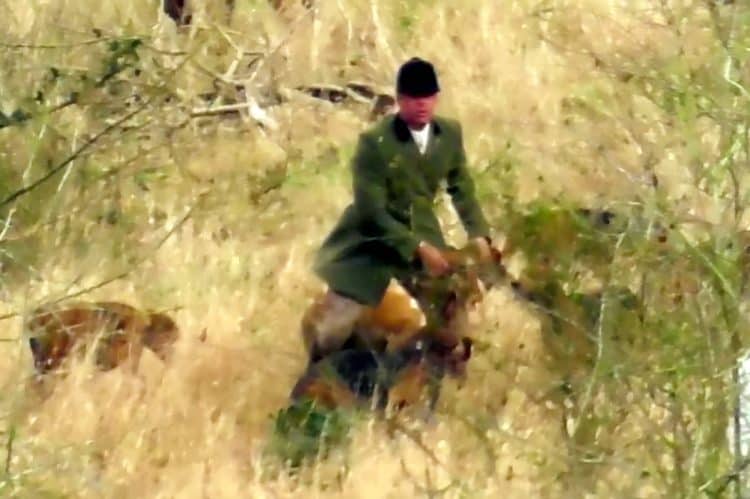 This is the horrifying moment a huntsman picks up a fox’s HEAD after the animal was ripped in half by a pack of dogs.

Footage shows a dozen hounds chase the fox through woods before tearing into the cornered animal.

The sickening scenes were filmed during the Warwickshire Hunt meeting in Walton and Combrook, Warks., on Wednesday (16/2) afternoon.

While members of the hunt watch, a man dressed in a green jacket and wearing riding boots, approaches the hounds and picks up the dead fox’s head and torso.

He then walks a few yards and picks up the mauled animal’s lower body before walking away. The remains were then collected by a terrierman on a quad bike.

In a statement after the incident, West Midlands Hunt Saboteurs said: “The Warwickshire Hunt can say what they want and can come out with the usual excuses about accidents but this is the sixth time we have filmed them killing wildlife since September.

“The excuses wore thin a long time ago and every time they kill again their excuses get more and more unbelievable.

“Their huntsman has previously been convicted of illegal hunting and continues to takes the hounds to places he knows the hounds will likely find foxes.

“Friday 18th February is the 17th anniversary of the Hunting Act. What this demonstrates is that the current law is not working.

“If it was then 17 years later the Warwickshire Hunt would not be taking a pack of hounds out into the countryside four days a week, regularly killing wildlife and arrogantly believing they can get away with it.

“The Hunting Act needs to be strengthened to eliminate all loopholes.

“There needs to be a complete total ban on all forms of hunting with hounds.”