Police eventually released a man after protestors halted an immigration raid in south London on Saturday. 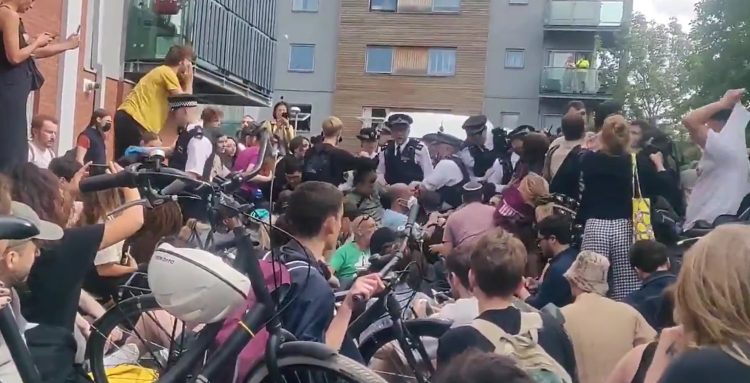 A man arrested for immigration offences was released after protesters gathered in south-east London for hours to block a van he was in from leaving.

Footage from the scene showed a crowd of people sitting on the ground in front of the vehicle in Peckham, while another clip showed members of the public standing and shouting “let him go”.

Metropolitan Police officers were called to Evan Cook Close shortly after 1.30pm on Saturday “to a report of protesters obstructing immigration officers” and said officers remained at the scene shortly before 5pm.

It is understood the man is Nigerian and was suspected of overstaying his visa. He was released on immigration bail.

A spokesman for the Met said: “Officers attended and found a van was being prevented from leaving the location.

“One man has been arrested by immigration enforcement officers for immigration offences.”

Eleanor Janega, 39, from south-east London, told the PA news agency: “We were alerted that there was an immigration raid in process so locals came down to block it.

“We had been sitting here blocking the van and having ice lollies. They brought more police in and tried to break through the crowd by pushing us. We all sat down.”

Labour councillor Reginald Popoola said people had “encircled the van peacefully”, but claimed some people were shoved during the demonstration.

On the news the man had been released on bail, Mr Popoola told PA: “He’s being released, peaceful protest is powerful.”

A woman, who gave her name only as Nicola – and who is an activist with the south London arm of Stand Up To Racism, said police “gave up” trying to arrest people at the scene.

She told PA: “Police tried to arrest a number of activists at the front, but they were held onto by others who were also sitting down and the police gave up.

“And finally, after a lot of protest, the police announced that they were going to release him (the arrested man) and it took, I don’t know, about half an hour for them to actually open the doors so we all stayed and called for this to happen quickly.”

A spokeswoman for the Home Office said: “Preventing immigration enforcement teams from doing their job is unacceptable.

“Blocking or obstructing them will not deter them from undertaking the duties that the public rightly expect them to carry out.”

Saturday’s incident comes as the Government faces criticism for its immigration policies.

A High Court ruling on Friday paved the way for the first flight taking migrants from the UK to Rwanda to go ahead on Tuesday.

Campaign groups and a union had asked judges to block the deportation flight and said they were “disappointed” and “deeply concerned” for the welfare of those due to be sent to Rwanda, adding they would appeal against the decision on Monday.