These shocking pictures show a 22-year-old woman lying in agony on the floor of A&E for more than FIVE HOURS because of the NHS crisis. Kyra Dew was rushed to hospital after she collapsed at home but was told she would have to wait for a bed to become available. Kyra, who suffers with Polycystic […] 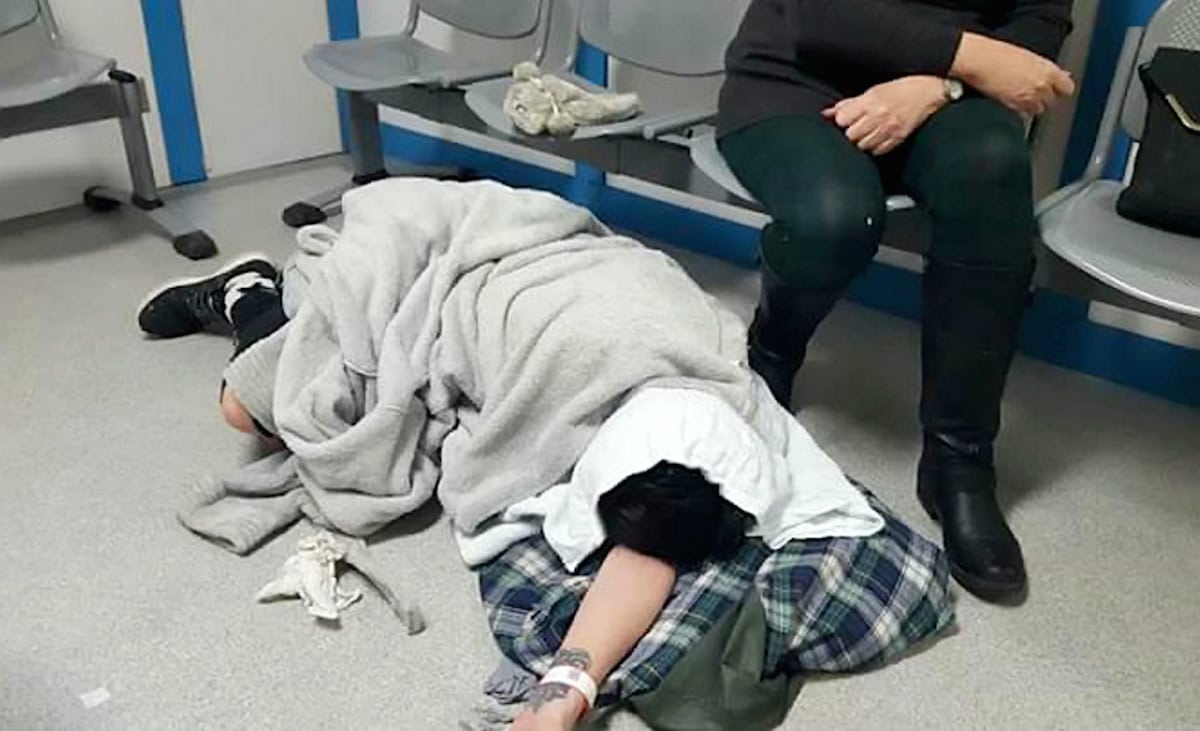 These shocking pictures show a 22-year-old woman lying in agony on the floor of A&E for more than FIVE HOURS because of the NHS crisis.

Kyra Dew was rushed to hospital after she collapsed at home but was told she would have to wait for a bed to become available.

Kyra, who suffers with Polycystic Ovary Syndrome (PCOS), was struck down following complications from an operation last month.

While recovering at home in Leominster, Herefordshire, she started suffering stabbing pains on January 10 and her mum Sandra drove her to Hereford County Hospital.

She was given oral morphine in A&E at 2pm, but by 3.30pm, Kyra’s pain had become unbearable.

A bed was still not free so she was forced to lie on the floor of the waiting room area with a coat as a makeshift pillow and a hospital blanket draped over her.

She was eventually moved onto a ward at 7.15pm – more than five hours after she first arrived at A&E.

“There was no beds or trollies so she could only lie down on the floor and the receptionist got some bedding and coats and made her comfortable.

“Unfortunately due to getting used to the Tramadol and oral morphine, A&E is the only option most months.

“The staff were brilliant and were running around like mad.

“The closure of the Asda Walk-in centre meant that people were coming into A&E with cut fingers and bruises on their heads when before they would have gone elsewhere to get assessed.

“When a doctor came to see her there were other buzzers going off and he was
working after his shift had finished. I do feel for the staff as this is down to the Government cut-backs.

“They simply don’t have the resources to cope. Seeing Kyra forced to lie on the floor of A&E for hours was heart-breaking.

“I wished we’d stayed at home but we didn’t have the painkillers for her so had to come to hospital.

“We also didn’t know if it was more serious and maybe she’d suffered an internal bleed. She was in so much pain we had to do something.”

Last summer Kyra was placed on an NHS waiting list for laser surgery to treat her condition and endometriosis which had been causing her pain for several years.

But due to a long operation waiting list the NHS finally sent her to St Joseph’s private hospital, in Newport in December.

But while she was recovering she collapsed. Following a scan, she was discharged the next day.

A spokesman for Hereford County Hospital said: “Unfortunately, our Emergency Department was experiencing high demand at this time. Wye Vally NHS Trust has experienced unprecedented pressure on its services in recent weeks. This pressure is unrelenting.

“These winter pressures have been well documented in the media and, like other NHS Trusts, WVT has plans to help it cope with these extra demands on its services.

“Patients are triaged within the Emergency Department to ensure they are seen and treated according to their clinical need.

“In a country with many older people we see many very sick, elderly and frail patients who need to be prioritised and treated urgently. This can lead to less serious patient waiting longer for treatment.

“We apologies to those patients who have had to wait longer than they have expected. While we can’t comment on individual patients, it would be true to say that we are committed to ensuring that every patient who comes through our doors receives the best possible care we can give them.

“Our dedicated team of staff in the Emergency Department has been working under enormous pressure for several weeks and we would like to pay tribute to their professionalism and the compassionate care they give our patients.”