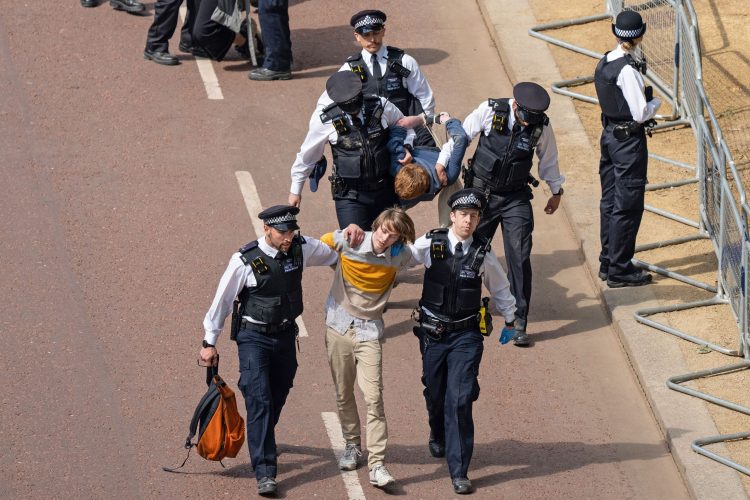 Several arrests have been made after some people attempted to enter the ceremonial route on The Mall before Trooping the Colour, the Metropolitan Police said.

A group were dragged by police out of the path of a military band as they marched along at around 10.10am.

The protestors were reportedly from Animal Rebellion ‘taking bigger action against the Dairy industry; they said on Twitter.

The Metropolitan Police said the arrests were public order-related for highway obstruction.

The force said on Twitter: “Thank you to the crowd who showed their support by clapping our officers who returned to their post after dealing with the incident swiftly.”

The police have warned that viewing areas ‘are now full’ and advised to ‘enjoy the Jubilee celebrations elsewhere’.

‘To avoid the disappointment of not being able to enter the viewing areas please avoid the area.’

The Royal Parks also tweeted: ‘Crowds have flocked to St James’s Park for Trooping the Colour and public viewing areas are now at full capacity.

‘Please do not head to St James’s Park but enjoy the Jubilee celebrations elsewhere.’

Coronavirus: Avoiding restaurants is not the answer