A sea monster that hunted “like the great white shark” more than 250 million years ago has been dug up… in the Nevada! The six foot long beast had huge jaws and three parallel rows of razor sharp teeth – with several smaller ones inside its enormous mouth. Palaeontologist Dr Carlo Romano said the creature […] 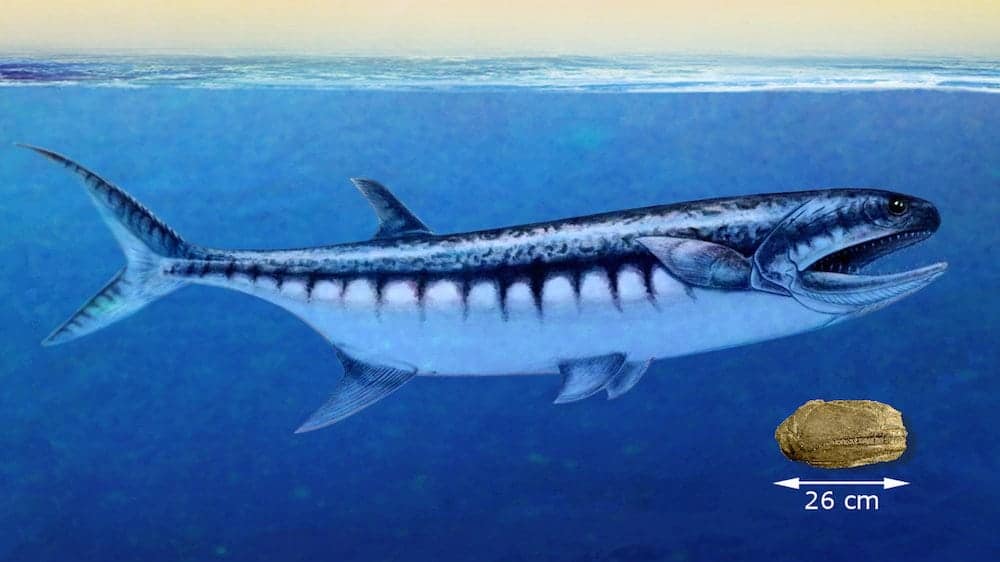 A sea monster that hunted “like the great white shark” more than 250 million years ago has been dug up… in the Nevada!

The six foot long beast had huge jaws and three parallel rows of razor sharp teeth – with several smaller ones inside its enormous mouth.

It would have pursued its prey, then bitten it – before swallowing the hapless fish whole.

Scientists have named it Birgeria americana as species of Birgeria existed worldwide.

The fossil was dug out of rocks dating back 251 million years to a time when the desert famous for Death Valley – one of the driest places on Earth – was covered by a warm ocean.

This was just a million years after the worst mass extinction in history when around 90 per cent of all life was wiped out.

It makes the discovery especially significant as it shows the food chains recovered much more rapidly than previously believed.

The fierce predator was identified from a partial skull more than 10 inches long which included the inch long rows of teeth along the jaw margins, and the smaller ones inside.

The catastrophic mass extinction took place about 252 million years ago at the boundary between the Permian and Triassic geological periods.

Worldwide biodiversity then recovered in several phases throughout a period of about five million years.

Until now, paleontologists have assumed the first predators at the top of the food chain did not appear until the Middle Triassic epoch about 247 to 235 million years ago.

B. americana, one of the earliest large sized predatory fishes of the Triassic period, rewrites the history.

In the United States, almost no vertebrate fossils from the Early Triassic (252 to 247 million years ago) have been scientifically described until now

Explained Dr Romano: “The surprising find from Elko County in northeastern Nevada is one of the most completely preserved vertebrate remains from this time period ever discovered in the United States.”

It is the earliest example of a large sized Birgeria species, about one and a half times longer than geologically older relatives.

According to earlier studies, marine food chains were shortened after the mass extinction event and recovered only slowly and stepwise.

In addition, researchers assumed that the ancient equatorial regions were too hot for vertebrates to live during the Early Triassic.

Finds such as the newly discovered Birgeria species and the fossils of other vertebrates now show that so-called apex predators – animals at the very top of the food chain – already lived early after the mass extinction.

The existence of bony fish close to the equator ‒ where Nevada was located during the Early Triassic ‒ indicates that the temperature of the sea was a maximum of 36°C.

The eggs of today’s bony fish can no longer develop normally at constant temperatures above 36°C.

Added Dr Romano: “The vertebrates from Nevada show that previous interpretations of past biotic crises and associated global changes were too simplistic.”

Despite the severity of the extinctions of that time and intense climatic changes, the food webs were able to redevelop faster than previously assumed.

The cause of the mass extinction has been debated for decades. Earlier this year researchers blamed climate change, a salutary warning for today’s global warming.