The stunning fountain bush was spotted by a sharp eyed student botanist during an expedition to the mountain fringed winelands of the Western Cape. 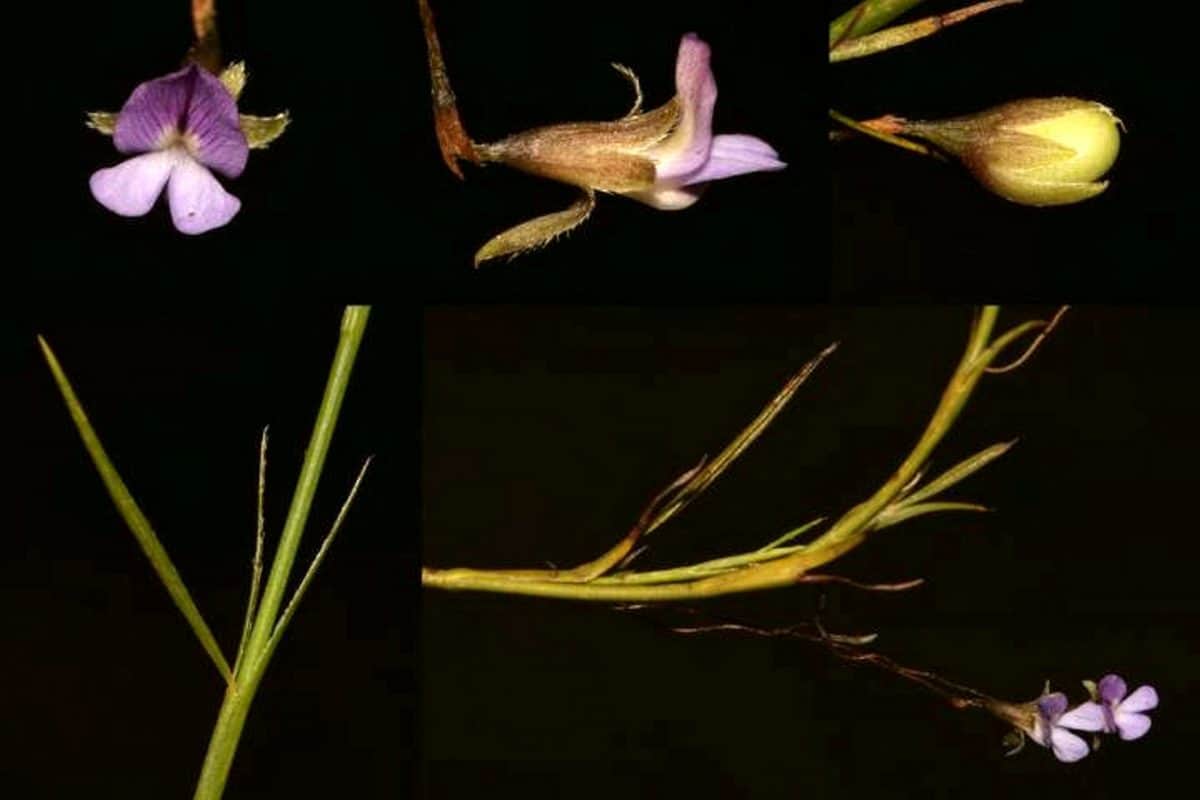 A sweet pea plant with a unique purple flower that was believed to have gone extinct more than 200 years ago has been found growing in South Africa.

The stunning fountain bush was spotted by a sharp eyed student botanist during an expedition to the mountain-fringed winelands of the Western Cape.

Named Psoralea cataracta, it has delicate petals and threadlike stalks. It had not been seen since 1804 until Brian du Preez accidentally stumbled upon a population.

They were on a narrow track close to a river on a farm near the scenic village of Tulbagh, which is enclosed on three sides.

The survival of the long lost species was confirmed by Professor Charles Stirton, former director of the National Botanic Garden of Wales.

He said: “This is a very important find as it shows how the Cape is still relatively unexplored in many mountainous areas.”

Sweet peas are among the most popular plants in the UK. Their combination of butterfly-wing colours and wonderful fragrance captures the very best of a British summer in one flower.

Psoralea cataracta was one of the first recorded plants to have been lost to forestry and agriculture in the Western Cape in the 1800s. It only occurs next to mountain streams in the region.

It was known from a single specimen collected from ‘Tulbagh waterfall’ at the start of the 19th century.

In 2008, after many fruitless searches, it was officially declared extinct on the Red Data List of South African Plants.

Mr du Preez, 26, instantly recognised it from previous search efforts as a volunteer with CREW (Custodians of Rare and Endangered Wildflowers) around the waterfall.

He said: “As soon as I saw those delicate thread-like flower stalks, I knew it was Psoralea cataracta.”

He said: “Given than many of the Cape Flora only come up briefly after fires, fading quickly, and that sometimes these fires are irregular, the chances of being in an area at the right time is slim. Well done to Brian for a wonderful find.”

Ismail Ebrahim, project manager at CREW, agrees that it is a groundbreaking discovery.

He said: “It is really uncommon to find a properly extinct species, something that hasn’t been seen for ages.

“And with Cape Flora it is even harder, because most species are restricted to a really small patch and it is easy to miss them if you don’t go off the beaten path.

“It also just shows you the value of proper field botany, like they did it in the old days.”

Mr du Preez has built a reputation. While at Stellenbosch University, South Africa, in 2016, he rediscovered two presumed extinct species in the pea family.

Polhillia ignota and Aspalathus cordicarpa, were last seen in 1928 and the 1950s, respectively.

This year he collected a new species of Aspalathus growing on sand dunes on the banks of the Riet River in the Swartruggens Mountains north of Ceres.

He is now in a rush to get the species described, as this part of the Riet River is earmarked for orchard expansion.

Warned Mr du Preez: “We can only conserve what we have described. Only species that have been formally described can receive a Red Data List status, which by law then protect it from development, depending on its conservation status.”

For this reason, he has decided to tackle a revision of the genus Indigofera in the Greater Cape Floristic Region (GCFR) for his PhD.

This diverse genus comprises over 100 species in the region, with at least 30 new species to be formally described.

He has been covering thousands of miles in his Nissan bakkie – from the Richtersveld through into the Eastern Cape, and everything in between for the past six months, and has already collected over 60 Indigofera species.

For botanists, the period from September to November every year is when most plants are in flower.

So next week he is off on a three week field trip to the Garden Route and the Eastern Cape.

Sweet peas were unknown in the UK until 1699, when a monk in Sicily called Franciscus Cupani sent seeds of Lathyrus odoratus to renowned Enfield horticulturalist Dr Uvedale.

It was likely to have been the magenta and purple bicolour now called ‘Cupani’. There are thousands of varieties.