These photographs show the ghostly wreck of a steamship which sank on Christmas Eve 117 years ago. Lodged in the sands of the Severn Estuary, the remains of the boat were captured by sonar imagining for the first time. It was thought to be cargo vessel The Brunswick, which overturned in deep fog when she […] 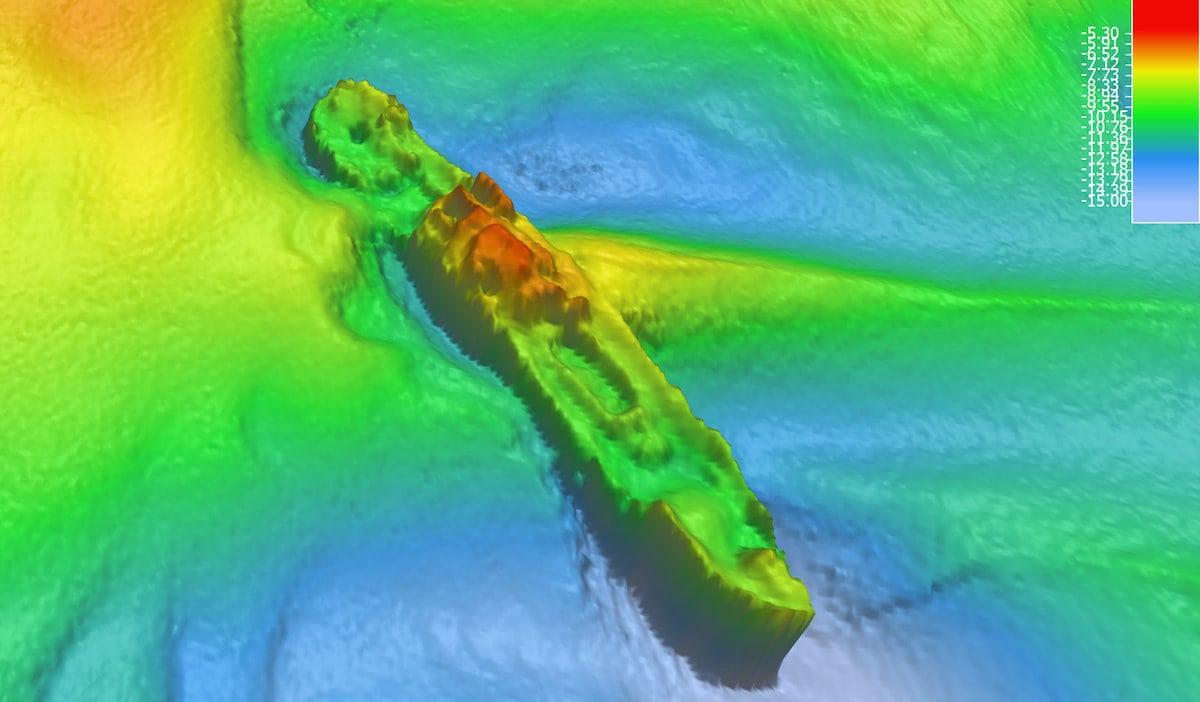 These photographs show the ghostly wreck of a steamship which sank on Christmas Eve 117 years ago.

Lodged in the sands of the Severn Estuary, the remains of the boat were captured by sonar imagining for the first time.

It was thought to be cargo vessel The Brunswick, which overturned in deep fog when she ran aground on a sandbank.

Sailors who escaped with their lives eventually managed to retrieve the bodies of three men who were in the cabins after the tragedy, in 1900.

The remains of men working in the engine room at the time were never recovered.

The photographs were captured by hydrographic technology, during a survey of the Harbour Area in Bristol by state-of-the-art vessel the Isambard Brunel.

Historic England and Bristol Port’s Marine Department are both in agreement it is likely to be the doomed ship.

The 210ft long by 30ft wide ship matches the dimensions of the Brunswick, which regularly travelled between Bristol and Liverpool.

Emily Hand, who works in the Marine Department, said: “From research, there is a chance it may be the Brunswick, which is the same size and shape and transited between Liverpool and Bristol.

“But there is no way to know for sure as many other vessels could fit the size and shape of this wreck.”

The Brunswick was only two years old when she sank, and was one of the best equipped on the Liverpool line.

As she departed the Northern port the weather conditions were fine, but as the steel screw steamer approached Black Nore Point, Portishead, thick fog enveloped her.

The ship ran aground on a sandbank and keeled over, and quickly filled with sand and water.

Eight men who were on the deck at the time managed to escape in a lifeboat but were unable to save their colleagues below.

A report written by one of the sailors reveals the moment tragedy struck.

It said: “It all happened so quickly that there was no chance of doing anything for the poor fellows below.

“In fact, I walked along her side to get into the little boat, and we caught hold the top end of the mainstay to hold the small boat in position to look around for those who were missing.

“We all had to put our heads under the mainstay to get away, and it took us all our time to get the boat clear.

“When the ship began to cover entirely we rowed towards Black Nore Point and then the tug came up and towed us to Portishead.”

The crew returned to the scene a few days later and managed to retrieve the bodies of three men who were in their cabins.

But they could not reach the others, who were in the engine room.

The vessel has been covered by sand for 117 years until the Port Marine team discovered it.

Shifting sands and sediment in the estuary are close to submerging it once more and have made it impossible to fully recover the wreck.