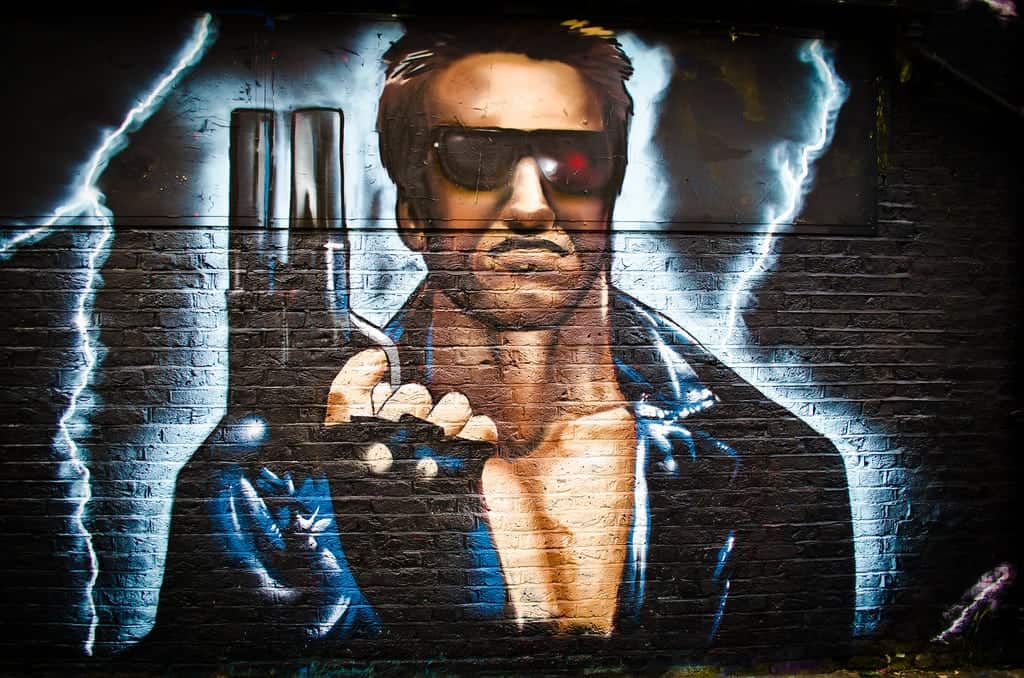 Artificial skin like The Terminator’s that is incredibly stretchy and sensitive to touch has been created for the first time.

Just like the stuff you see wrapped around Arnold Schwarzenegger”s metal skeleton in the blockbuster 1980’s movie, the synthetic replica mimics the real thing.

The gooey substance can detect small facial expressions and respond to them when attached to a person’s own skin.

It is soft, malleable and can ‘feel’. As well as being able to stretch by more than 3,400 percent, it can quickly return to its original form.

It can even regenerate itself. Its developers say the electrically conductive hydrogel “takes stretchability, self-healing and strain sensitivity to new limits.”

Husam Alshareef, professor of materials science and engineering, said: “The material we have developed is like a smart skin.

“It is stretchable, self healing and has ‘haptic’ feedback – meaning it can actually ‘feel’. Thus, it has applications in soft robotics, wound healing and biosensing.”

The e-skin is a composite of the water-containing hydrogel and a metal carbide compound called MXene.

It will stick to many surfaces, including skin. When cut into pieces, it can quickly mend itself upon reattachment.

It could be used in a range of applications – from prosthetics to biomedicine.

An e-skin is a thin, translucent material which can copy the function and mechanical properties of human skin.

Getting it right has been a ‘Holy Grail’ of science for decades because skin, the largest organ in the human body, is so complex.

Prof Alshareef said smart materials that flex, sense and stretch like skin have many applications in which they interact with the human body.

Explained first author Dr Yizhou Zhang, a member of Prof Alshareef’s lab: “The material’s differing sensitivity to stretching and compression is a breakthrough discovery that adds a new dimension to the sensing capability of hydrogels.”

This new dimension may be crucial in applications that sense changes in the skin and convert them into electronic signals.

A thin slab of the material attached to a user’s forehead, for example, can distinguish between different facial expressions, such as a smile or a frown.

This ability could allow patients with extreme paralysis to control electronic equipment and communicate.

Strips of the material attached to the throat have impressive abilities to convert speech into electronic signals.

This might allow people with speech difficulties to be clearly heard.

Co author Dr Kang Hyuck Lee said: “There is real potential for our material in various biosensing and biomedical applications.”

These could be applied internally, on diseased organs, in addition to adhering externally to skin.

The team also hopes to develope a smart material that could monitor the volume and shape of an organ and vary drug release according to signals produced.

An ideal potential would be to combine both medical sensing and therapy. Other exciting possibilities lie in robotics, where the material could serve in touch-sensitive finger-like extensions for machinery, for example.

There are also anti-counterfeiting possibilities, with slabs of the material and integrated electronics proving highly sensitive at detecting signatures as they are written.

The researchers said they have a long list of possible applications that can now be further explored.

Added Prof Alshareef: “There is great potential for commercialisation.”