Crowds packed the streets to listen to Greta Thunberg and demand climate action at Cop26. 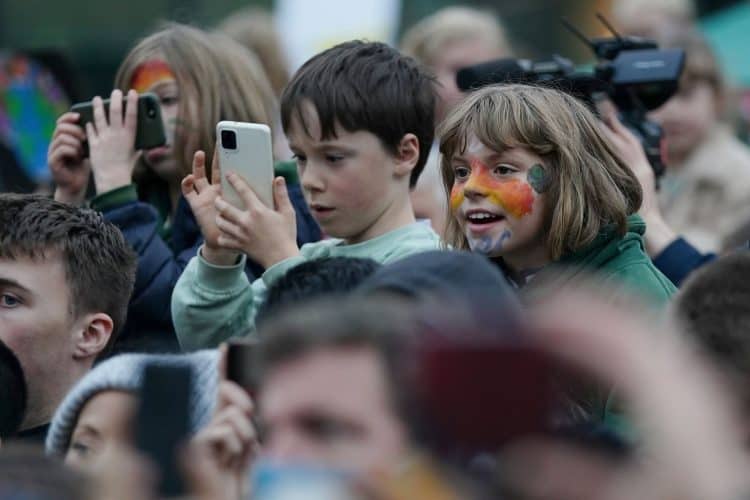 School-skipping pupils were joined by healthcare workers, activists and artists as they marched through the streets of Glasgow demanding climate justice.

People from across the world gathered in Kelvingrove Park before marching past the Cop26 conference to George Square in the city centre.

One 14-year-old climate protester said young people “shouldn’t think twice” about protesting for the things they care about as he arrived in Glasgow.

Finlay Pringle, from Ullapool, in the Scottish Highlands, said: “I love our oceans, I mean I’ve been living there, so for me, protecting them was very simple. They’re basically my second home.”

He travelled by train to Glasgow with his father to take part in a march demanding climate action at Cop26.

‘Listen to the people’

Charlie O’Rourke, 14, said his message to global leaders at Cop26 was “listen”.

“I mean, obviously, everyone’s hopeful, but it really does depend on the Government and the way they change.

“Obviously the Cambo (oil field), let’s hope that doesn’t happen because that would really, really mess up the world. But we can only hope.”

He marched alongside his mother Cairsty and sister Edith.

Cairsty said: “I’m basically here for my children and for the generations to come to just show that something has to happen and it has to happen very quickly in order to change the trajectory that we’re going on.

“Big words are being spoken at Cop26 and governments around the world have to be made to follow through on the promises that they make during this Cop.

“It is absolutely pivotal to the future, to us as a human race. And we don’t have that much time. So it’s got to happen now.”

O’Rourke, who is from Glasgow and works for the NHS, said the Scottish Government have been “on the fence for too long” on the issue of the Cambo oil field.

She said: “I’d like to hear Nicola Sturgeon saying a bit more against it. I’d like all of this funding to go into a way out of this, a way out of using fossil fuels.”

Jenny Ayrton, Gemma Knowles and Naomi Wright brought a giant moth made out of milk cartons to the climate strike protest in Glasgow.

They said more than 20,000 of the model moths have been made by people across the country as a “moth-to-a-flame” metaphor for the environmental crisis.

Ayrton said her message would be for people to “check their local community energy organisations because when we join together then we can make a difference.”

One protester rolled through the streets of Glasgow in a globe made from twisted metal.

The hollow sphere was made by German artist Arne Drosser, who walked inside it over three months to get to the Cop26 conference.

He said: “In one way the sphere is our earth, in other ways it is about network – we are all connected all around the world with the same problems caused by climate change.”

One couple from North Ayrshire built a huge papier-mache representation of a climate refugee that they call “Displaced Dora”.

Veronika Liebscher, 57, said: “We made her to bring to Cop26 to raise awareness that anyone can become a refugee through climate change – anyone can lose their home or their livelihood.

“And there’s no system of support for refugees, which means they often lose their families during the flight.”

Liebscher and her partner Richard Leat, 72, have been bringing the figure to the Cop26 centre “most days”.

Charlotte Francis, 42, was campaigning in Glasgow for the Doctors for Extinction Rebellion group.

The Bristol-based physiotherapist said all kinds of healthcare workers had joined the movement after seeing the growing impact of climate change on their patients, particularly with lung conditions linked to poor air quality.

She said: “The science says we’ve got 10 years to turn this around, so world leaders here at Cop need to tell the truth, and not only tell the truth, they need to act on it.”