“As an ethnic Russian and a Russia citizen, I see it as my moral duty to facilitate the denazification of Russia," he said. 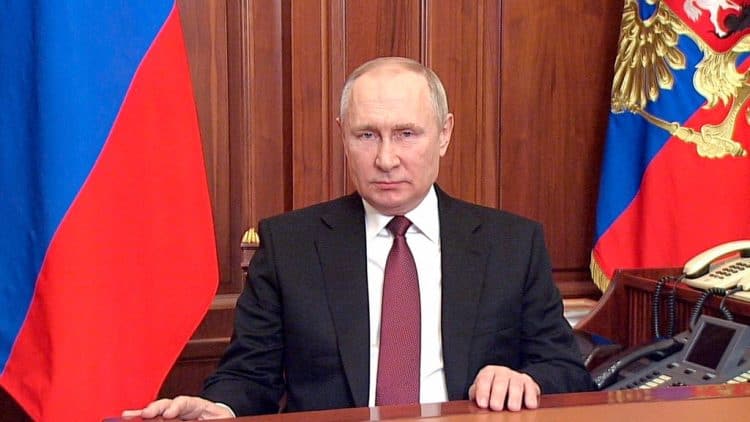 A Russian businessman has placed a $1 million bounty on Vladimir Putin’s head as attacks on Ukraine intensify.

Entrepreneur Alex Konanykhin made the promise in a post on social media site LinkedIn and called it his “moral duty” to take action.

He urged the country’s military officers to bring the president to justice, saying:

“I promise to pay $1,000,000 to the officer(s) who, complying with their constitutional duty, arrest(s) Putin as a war criminal under Russian and international laws,” wrote Mr Konanykhin.

“Putin is not the Russian president as he came to power as the result of a special operation of blowing up apartment buildings in Russia, then violated the Constitution by eliminating free elections and murdering his opponents.”

His post included a photo of Mr Putin, with the caption, “Wanted: Dead or alive. Vladimir Putin for mass murder.”

And he added: “As an ethnic Russian and a Russia citizen, I see it as my moral duty to facilitate the denazification of Russia. I will continue my assistance to Ukraine in its heroic efforts to withstand the onslaught of Putin’s Orda.”

The word “Orda” is Russian for “horde.”

Russian forces have laid siege to two strategic Ukrainian ports and pressed their bombardment of the country’s second-biggest city, while the huge armoured column threatening Kyiv appeared to be stalled outside the capital.

Moscow’s isolation deepened, meanwhile, when most of the world lined up against it at the United Nations to demand it withdraw from Ukraine.

And the prosecutor for the International Criminal Court opened an investigation into possible war crimes in Ukraine.

A second round of talks aimed at ending the fighting was expected on Thursday between Ukraine and Russia, but there appeared to be little common ground between the two sides.

Russia reported its military casualties for the first time since the invasion began last week, saying nearly 500 of its troops have been killed and almost 1,600 wounded.

Ukraine did not disclose its own military losses but said more than 2,000 civilians have died, a claim that could not be independently verified.

With fighting going on on multiple fronts across the country, Britain’s Ministry of Defence said Mariupol, a large port city on the Azov Sea, was encircled by Russian forces, while the status of another vital port, Kherson, a Black Sea shipbuilding city of 280,000, remained unclear.

Russian President Vladimir Putin’s forces claimed to have taken complete control of Kherson, which would make it the biggest city to fall yet in the invasion.

But a senior US defence official disputed that.

“Our view is that Kherson is very much a contested city,” the official said.

But the mayor of Kherson, Igor Kolykhaev, said Russian soldiers were in the city and came to the city administration building.

He said he asked them not to shoot civilians and to allow crews to gather up the bodies from the streets.

“I simply asked them not to shoot at people,” he said in a statement.