"Their only suggestion was to go to the food bank. It's not right," said one of the mums. 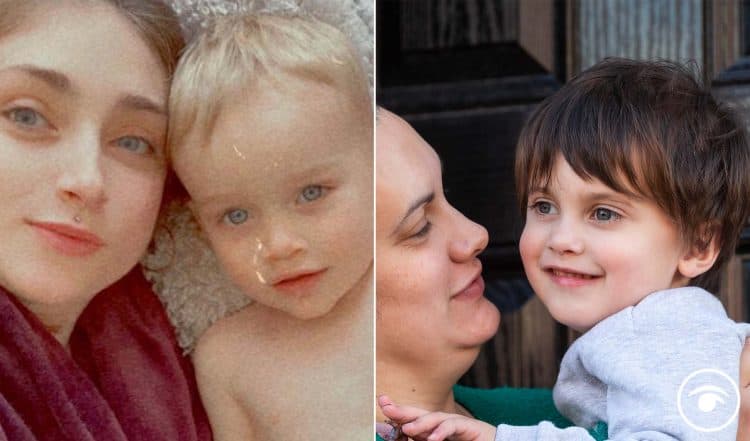 Two mums have told the story of how the Universal Credit cut is already impacting on their lives.

A single mum of an autistic boy has lasted Boris Johnson for “not caring” about low earners as he cuts the £20-a-week Universal Credit uplift.

Sarah Coothoopermal, 35, said cuts were being made “in the worst place at the worst time” as millions face being plunged into poverty.

Today the £20-a-week increase to Universal Credit, brought in to help people on low incomes struggling through the Covid-19 pandemic, is being withdrawn.

Sarah, a full-time carer for her son Taron, 3, said: “I don’t know what to expect, it’s been hard enough as it is and that extra £80 a month has made a massive difference.

“The price of everything has gone up, but now your income is being cut, it’s really hard.

“I always make sure we’ve got food in the house, that’s my priority for my boy. But now we might not be able to put the heating on as much because you have to budget.

“With Christmas coming up, I’ve already started getting in non-perishable foods in case there’s a shortage.

“That extra £80 does make a difference, it can help with the food shop every week, now I’m going to have to cut back.

“I don’t think it’s fair, there’s so many people that have been furloughed and lost their jobs because of Covid and now they’re going to have their benefits cut too.

“It just seems like it’s the worst time to make the cuts and the worst places to cut from.

“Energy bills are rising and I don’t know where they think people will get the money from.

“I’m genuinely surprised Boris Johnson is still in power with the way he has handled Covid.

“He only seems to care about the top 5% of the population, the top earners, and forgets about everybody on lower and middle incomes.”

A single mum has been forced to end her maternity leave early to work nights in a bar after £20-a-week Universal Credit cuts have left her unable to ‘afford to live’.

Sophie Carter, 24, gave birth to son Marley eight months ago, and is returning to work early in a bid to make up for the £80 a month cut.

Yesterday, the £20-a-week increase to Universal Credit, which was brought in to help people on low incomes struggling through the Covid-19 pandemic, is being withdrawn.

Mum-of-two Sophie is now set to spend her nights working in a bar instead of tucking her kids into bed, despite planning to have maternity leave for a year.

Sophie, who lives in Bicester, Oxfordshire, said: “I’ve been extremely stressed, as you can imagine, for the last month. It’s not fair for them to be doing that.

“As a single mother of two children, this has affected my mental health massively. Both my kids are in nappies, I’ve got to get formula, I have to get this and that and I haven’t been able to do that properly.

“I’ve explained to Universal Credit that I am struggling massively and that I need more help but they’ve basically said that there’s nothing they can do and I just have to get on with it.

“My second child is only eight months – I had hoped I could spend at least a year with him but I have to go back to work this month because I can’t afford to live.

“Their only suggestion was to go to the food bank. It’s not right.”

Before today’s cuts, Sophie was on maternity leave following the birth of her youngest son, Marley, receiving £160 every two weeks from the government since December 2020 on top of her Universal Credit.

This means that Sophie will now receive a whopping £400 LESS than she had before, leaving the single mum-of-two panicking about her future.

She’s now set to start working in a bar during the evenings to support her family with her elderly grandmother stepping in to help look after the kids.

Sophie, who cares for Marley and her two-year-old son, Emerson, said: “I’m going to have to work in a bar and it’ll be night shifts so I won’t be home to put my kids to bed, which is so hard.

“My nan will look after the kids when I’m working. She’s 73 now so I don’t feel like it’s fair to get her to help out like this but I haven’t been left with a choice.”

The £20-a-week increase in Universal Credit was introduced back in April 2020 to support those on low incomes during the Covid-19 pandemic.

18 months later, the increase is now being withdrawn with the government saying that higher wages, rather than taxpayer-funded benefit rises, will be the better option as the country emerges from Covid-19 restrictions.

For those like Sophie who have relied on the increase to get them through an extremely difficult year where jobs have been heavily affected, the news comes as a crushing blow.

Sophie claims she was only warned in September that the increase was disappearing and has struggled to comprehend how she will manage to support her family without it.

She said: “I didn’t even realise they had put a £20-a-week increase on my Universal Credit in the first place, so for me to get that message through to say they’re taking that amount from me, I was just shocked.

“They only told me a month before that they were taking back that £20-a-week. One month is not much time at all, I was so shocked.

“It’s a fair bit of money for me to miss out on, I just think it’s awful. People are struggling to live on what they have, even with that £20 – I know I have been.

“People might think that £20 isn’t a lot but when you have kids and you have to put food on the table, it’s a lot of money you’re taking away from people.

“I really think they should be looking into keeping that £20-a-week increase on there but obviously I know they aren’t going to do that because they like to make people live on the bare minimum.”