Welcome to the revolution, Lord Sugar. The Apprentice host has lashed out at 'Brexit's biggest liars', demanding punishment for the 'red bus' stunt. 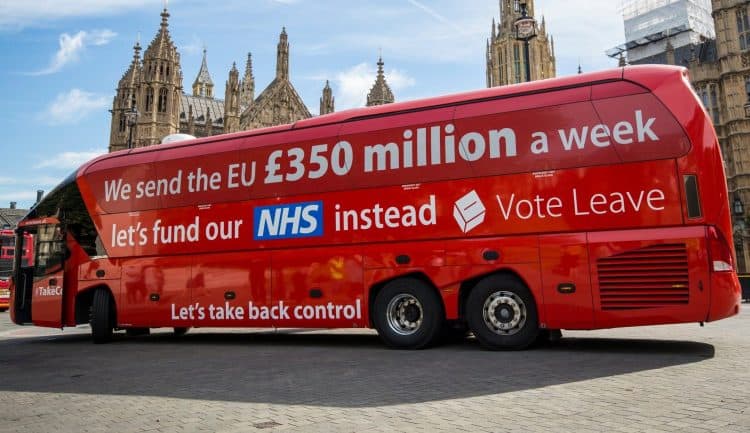 Alan Sugar isn’t everyone’s cup of tea, to put it diplomatically. The outspoken TV host is just as famous for his Twitter antics as he is for hosting The Apprentice – and the House of Lords representative has pulled no punches in his latest assessment of Brexit and its architects.

Tweeting over the weekend, Lord Sugar branded Boris Johnson and Michael Gove as ‘the biggest liars’ involved in the 2016 Brexit referendum. The Leave Campaign won by a narrow margin, ushering in an era of chaotic negotiations and a number of setbacks for the UK.

Our divorce from the EU has come at a tremendous cost – with factors such as airport travel chaos and sewage-covered beaches being directly linked to this departure. Nonetheless, Boris, Gove and their cronies continue to boast about so-called ‘Brexit benefits’.

Getting cholera the next time we go for a dip in the sea isn’t exactly what we’d call freedom, however – and it now seems that the upper echelons of society are getting just as frustrated as the rest of us. Yesterday, The Times ran a scathing article about the current government.

And now, we’ve even got Lord Sugar suggesting that these top Tories should be imprisoned for their role in the referendum – and specifically, the infamous ‘red bus’.

Sugar told his 5.2 million followers that, had he misled the public in similar fashion to Brexit campaigners, he would expect to be jailed.

“The biggest liars in the 2016 Brexit referendum were Boris Johnson and Michael Gove, with the red bus. They should both go to jail. As a chairman of a public company, if I mislead or lied to my shareholders – in this case the public – I would be sent to jail.” | Lord Sugar