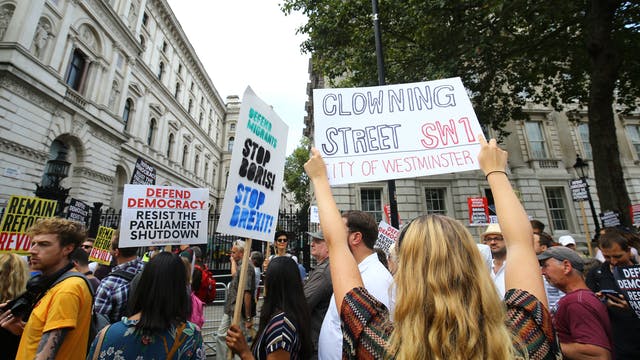 Protestors have taken to the streets in over 80 protests around the UK against Boris Johnson’s suspension of Parliament to curtail MPs’ scrutiny over a no-deal Brexit.

The area around Government buildings on Whitehall has been brought to a standstill by protesters and speakers from across the political spectrum addressed the thousands that thronged outside Downing Street.

Chants of “shame on you” were directed at Boris Johnson by demonstrators outside Downing Street on Saturday as streets around Government buildings in Westminster were brought to a standstill.

There are planned protests taking place across the UK organised by anti-Brexit campaign group Another Europe Is Possible and others.

Demonstrators gathered outside Oxford University’s Balliol College, which was attended by Mr Johnson, to express their displeasure about his handling of Brexit.

Lesley McKie, who was at the college with her family, criticised the “undemocratic actions of Boris Johnson and (senior adviser) Dominic Cummings”.

Denouncing the Prime Minister outside the institution where he established his “political profile” sends “a powerful message to Johnson and others leading this coup”, she added.

She told the crowds: “We cannot allow Boris Johnson to shut down Parliament and to shut down the voice of ordinary British people.”

More than 1,000 protesters gathered in cities including York, Manchester and Newcastle.

Chris McHugh, 33, who works for Labour MP Liz Twist and was demonstrating in Newcastle, said the protest is about “protecting democracy”.

He added: “The fact that thousands have taken to the streets of Newcastle today is so telling.”

They are also being held in towns including Bodmin in Cornwall and Clitheroe in Lancashire.

Left-wing campaign group Momentum has called on its members to “occupy bridges and blockade roads” in conjunction with unrest on the streets.

The protests were triggered by the PM’s decision to suspend Parliament for up to five weeks ahead of the October 31 Brexit deadline.

Opponents claimed the move was aimed at stopping discussion of Brexit and hampering cross-party efforts to block the prospect of a no-deal withdrawal from the European Union – an allegation denied by Mr Johnson, who said the move was normal and to prepare for setting out a new agenda in the Queen’s Speech.

The Leader of the Labour Party, Jeremy Corbyn expressed his support for the demonstrations against Boris Johnson proroguing Parliament, as did other politicians from across the political spectrum.

The Labour leader said: “The public outrage at Boris Johnson shutting down democracy has been deafening. People are right to take to the streets – and I encourage everyone to join the demonstrations in London and across the country tomorrow.”

#Stopthecoup and #DefendourDemocracy were trending on social media as estimated hundreds of thousands thronged city centres.