A man has placed himself underneath an immigration removal van in Glasgow. 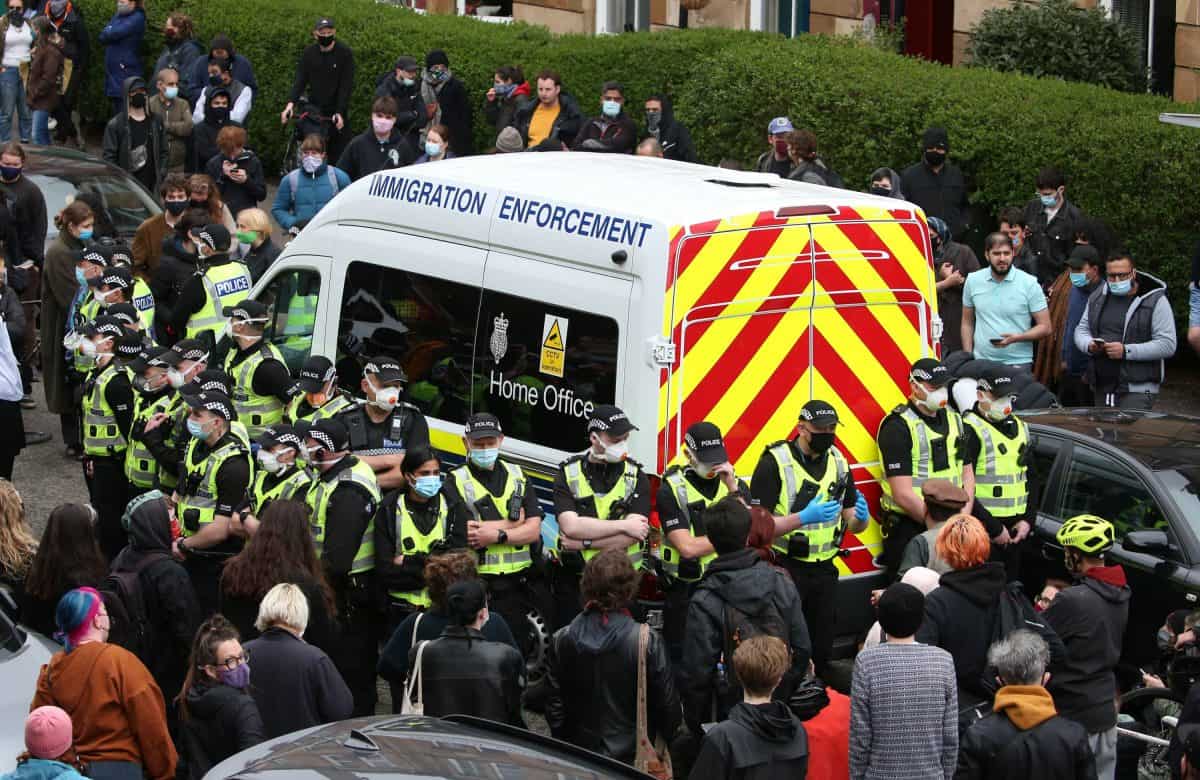 A man has placed himself under an immigration enforcement van in Glasgow as protesters try to prevent it from leaving.

The van is parked on Kenmure Street, with protesters also sitting on the road in front of it and police officers surrounding the vehicle. Around 200 protesters are at the scene, with chants of “Leave our neighbours, let them go” and “Cops go home” being heard.

A large number of police officers in face masks are in attendance. A Police Scotland spokesman said: “Around 9.55am this morning, police were called to an address in Kenmure Street, Pollokshields, following a protest by a large group of people.

“The call was made by UK Immigration Enforcement (UKIE) after a group of protesters gathered at the address where UKIE staff were in attendance. Police Scotland does not assist in the removal of asylum seekers. Officers are at the scene to police the protest and to ensure public safety.”

Mohammad Asif, director of the Afghan Human Rights Foundation, was one of what he said were hundreds of neighbours protesting against the action on Thursday.

The 54-year-old said: “We’re here against the hostile environment created by the Tories and the British state. The same people who run from the British and American bombs put at the back of the van right now. And they are about to be deported. And it’s on Eid you know… the guys are not even allowed to pray. How do you do that in a democratic society? It’s a sad day.”

Mr Asif, who left Afghanistan as a refugee himself in 2000, said the atmosphere amongst the protesters is peaceful.

As constituency MSP, I am deeply concerned by this action by the Home Office, especially today in the heart of a community celebrating Eid. My office is making urgent enquiries and stands ready to offer any necessary assistance to those detained https://t.co/jkdhDBvX31

Sabir Zazai, chief executive of the Scottish Refugee Council, wrote on Twitter: “Not close to the details on this but this is shocking, disgraceful and racist if people are raided by enforcement officers amidst the pandemic on the day of #Eid.”

Wafa Shaheen, head of services at the charity, said she was “shaken and angry” at the Home Office’s decision to “force people from their homes on the first day of Eid”, and she condemned the “heavy-handed approach”.

Tom, a neighbour who joined the protest, compared the immigration operation on Eid to a police raid on Christmas Day.

“The solidarity shown today shows the community will not stand for their neighbours being dragged from their homes,” the 31-year-old, who did not want to give his surname, said.

“I’d ask Christians to reflect on what it would feel like to have your house raided on Christmas Day.”

A Home Office official said that two Indian men had been detained on suspicion of immigration offences, but insisted that neither of them are Muslims.

I am disgusted by the Home Office raids in Pollokshields.

It is particularly unacceptable that this is happening during a pandemic, in an area that has a spike in cases and on the day of Eid.

We need an immigration policy that is based on human dignity & human rights.

Lotte, an artist and member of the Scottish tenants union Living Rent, lives on a street nearby. She said she joined the protest when she saw a small group outside the property on Kenmure Street at 10am on Thursday.

“I’d like to express my utter disgust at the brutal removal of my neighbours from their home,” the 26-year-old said.

“It is an awful thing to do on any day, but today being Eid makes it 10 times worse. I hope they will let our neighbours go.”

Scotland’s First Minister Nicola Sturgeon accused the Home Office of creating “a dangerous and unacceptable situation” with the action.

Sturgeon, who was sworn in on Thursday as MSP for Glasgow Southside, tweeted: “As constituency MSP, I am deeply concerned by this action by the Home Office, especially today in the heart of a community celebrating Eid.

“My office is making urgent enquiries and stands ready to offer any necessary assistance to those detained.”

He tweeted: “It is particularly unacceptable that this is happening during a pandemic, in an area that has a spike in cases and on the day of Eid.”

A Home Office spokesperson said: “The UK Government is tackling illegal immigration and the harm it causes, often to the most vulnerable people by removing those with no right to be in the UK.”

“The UK Government continues to tackle illegal migration in all its forms and our New Plan for Immigration will speed up the removal of those who have entered the UK illegally.”