Peter Kyle MP spoke about how Sir David Amess had been killed a week before, adding: “There was an atmosphere around Westminster that was chilling so to see that was horrifying." 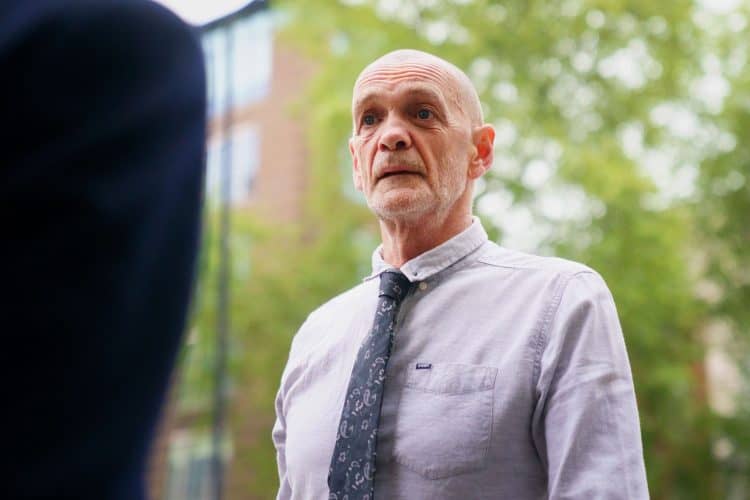 A man threatened a Labour MP by holding up makeshift gallows with a noose outside Parliament and telling him “this is what we do to traitors,” a court has heard.

Lance O’Connor, 57, allegedly called out the name of Hove MP Peter Kyle in Parliament Square, central London, while he was walking back to his office in Portcullis House on October 20 last year.

It is alleged the defendant then pointed at the object and said to Mr Kyle “this is what happens to traitors”.

Mr Kyle, 51, told the court that he felt “chilled” and “threatened”, especially in light of Sir David Amess being murdered a week earlier.

Giving evidence, the MP said: “About two o’clock I had just finished a lunch meeting and was heading back from the lunch meeting towards Parliament.”

Mr Kyle said he was walking towards the corner of Bridge Road near the Pc Keith Palmer memorial when he heard his name being called.

He said: “I could hear a voice calling my name but there were multiple voices and other things being shouted.

“When your name is called you, you instinctively look over and that is what I did.”

Asked what the tone of the voice was, he said: “It was in an angry shout.”

“I saw a man standing there holding gallows with a noose in Parliament Square.

“When I looked briefly the first time I did not quite take it in. It was only when I continued walking did the impact of what I had seen struck me.

“The word ‘traitor’ was being used and then when I looked across the road again, a man said: ‘This is what we do with traitors’.”

Mr Kyle said he also saw the man pointing up to the noose and took a photo which he later posted on Twitter, and was shown to the court.

“I was shocked, I was chilled, I was threatened,” he added.

Mr Kyle spoke about how Sir David Amess had been killed a week before, adding: “There was an atmosphere around Westminster that was chilling so to see that was horrifying.”

As I walked into parliament earlier this little charmer shouted ‘this is what we do with traitors’ at me, pointing at his gallows and noose.

Out of the two of us I’m the one who’s life and routine must adapt, not his.

Threat to my life

Martin Smith, defending, asked Mr Kyle if he had walked up towards the defendant and said ‘Do you think that is appropriate after we just lost one of our members?’.

Mr Kyle denied having any conversation with the defendant, saying MPs are “trained” by security services not to engage with threatening protesters.

He said: “I would not engage with anyone in any shape and form with someone who is making a threat to my life.”

Pressed on whether he knew for certain the defendant said the words “this is what we do to traitors”, Mr Kyle replied: “To the best of my knowledge, I’m pretty sure it was the person who was pointing to the gallows whose mouth was moving.”

The court heard that another man, Stephen Tiller, who was going to another protest, approached the defendant when he saw the gallows, asking “what is that for?”

Mr Tiller told the court: “He said, ‘All those f*s in there’ and pointed towards Parliament.”

Mr Kyle, who has been the MP for Hove since 2015, was appointed shadow secretary of state for Northern Ireland last year.