“One of our members who worked as a cleaner at the MoJ tragically died an untimely and avoidable death. That’s how far the levels of disrespect and mistreatment went and goes towards low-paid workers.” 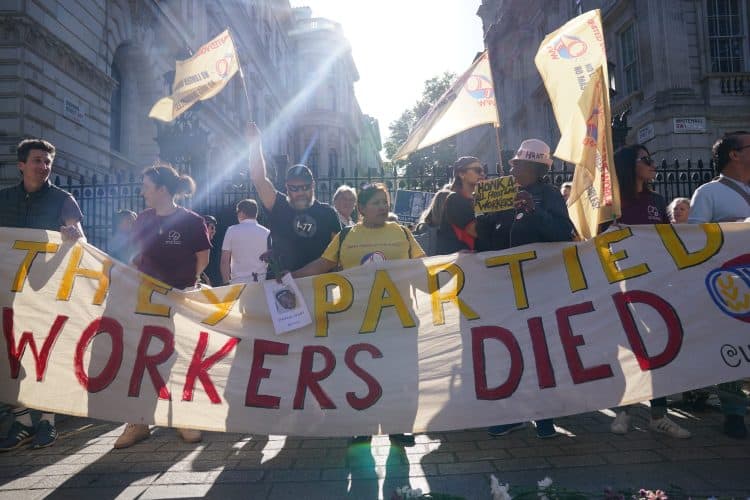 Demonstrators have gathered outside Downing Street to protest against the treatment of low-paid workers such as cleaners and security guards in government buildings across London.

The protest followed the publication of Sue Gray’s report into parties in Downing Street during Covid-19 lockdowns, which found multiple examples of “unacceptable” treatment of security and cleaning staff in Number 10.

The demonstrators also called for “justice” for a Ministry of Justice cleaner, Emanuel Gomes, who died during the pandemic in April 2020 after working for five days with suspected Covid symptoms.

According to reports, a coroner recorded his official cause of death as hypertension of the heart.

United Voices of the World (UVW) – the union Mr Gomes was part of, which represents cleaners and security guards in government buildings – organised the demonstration and called for better treatment of staff.

Chants including “justice for Emanuel” and “one rule for them and another rule for us” were shouted, while others banged drums to make enough noise for those in Downing Street to hear.

Vicente Mendez, a friend of Mr Gomes, attended the protest and said he was “very grateful” to everyone who had turned out to show their support.

Tea light candles, flowers and A4 posters with Mr Gomes’s face on them were laid along the road.

In her report into partygate, published on Wednesday, Ms Gray wrote: “I found that some staff had witnessed or been subjected to behaviours at work which they had felt concerned about but at times felt unable to raise properly.

“I was made aware of multiple examples of a lack of respect and poor treatment of security and cleaning staff. This was unacceptable.”

The report also said staff members “drank excessively” at the Downing Street Christmas party on December 18 2020, and a cleaner found red wine was spilled on one wall the next morning.

Petros Elia, UVW general secretary, said: “We’re not in the least bit surprised by the revelations in the Sue Gray report. We have thousands of members who work as cleaners and security guards and these workers face disrespect and discrimination on a daily basis in offices and government buildings across London, not just in Downing Street.

“It is outrageous to have rowdy and illegal parties during the pandemic but to then expect cleaners to mop up after you and to pay them, as well as porters and security guards, poverty wages and deny them full sick pay is abhorrent.

“Most of the cleaners and security guards out there are ethnic minority workers, black, brown and migrant people, who are disproportionately impacted by poor working conditions and racialised inequalities.

“We represent cleaners at the Ministry of Justice (MoJ) who had to walk off the job during the pandemic because they were not given adequate PPE and were denied full sick pay, which they eventually won for Covid-19 absences.

“One of our members who worked as a cleaner at the MoJ tragically died an untimely and avoidable death. That’s how far the levels of disrespect and mistreatment went and goes towards low-paid workers.”

Zack Polanski, a member of the Green Party and the London Assembly, spoke at the protest to show his solidarity.

He told the PA news agency: “Like anyone, whether they’re a politician or a member of the public, I made lots of sacrifices during Covid and there were lots of times when I couldn’t see friends or family.

“But we all knew those were the rules and we knew we were doing it for the good of the country, which makes it even more egregious that the people in power are breaking the rules.”

A No 10 spokesman said: “The Prime Minister has been appalled by the findings in Sue Gray’s report around behaviour towards treatment of security and cleaning staff.

“He has personally apologised to these dedicated members of staff, expects anyone who behaved in that way to apologise, and we are committed to addressing the full findings and recommendations in the report.”

Related: PM broke City Hall rules as he is accused of watering down ministerial code