It comes as around three in 10 people are concerned they may end up homeless in the next five years due to housing costs. 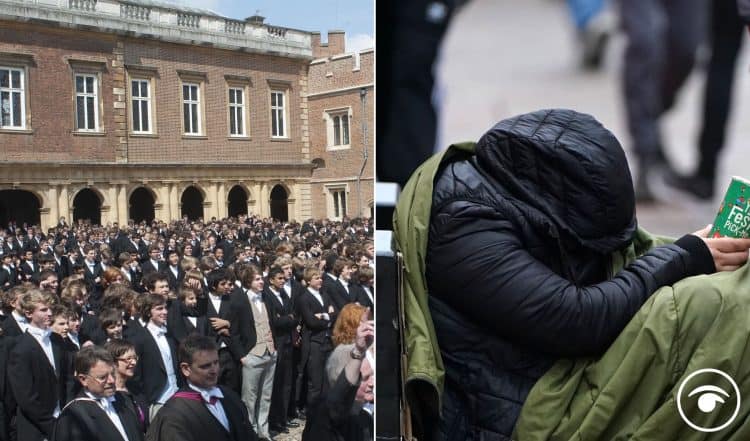 The number of pupils who are privately educated has risen to a record high, according to new figures.

It comes as around three in 10 people are concerned they may end up homeless in the next five years due to housing costs, according to a survey.

Every UK region has seen a boost in pupil numbers at independent schools, with the largest growth in the South West – a 3.6% rise.

The census also shows the diversity of UK private schools is increasing, with 37.7% of pupils coming from an ethnic minority background in 2022 compared with 35.1% in 2021.

In total, 95,991 pupils were identified as having special educational needs and disabilities, equating to 17.6% of all pupils and an increase on last year.

The ISC said fee assistance had increased to nearly £1.2 billion, a rise of 4.8%.

However, just £480 million was provided on a means-tested basis, meaning most bursaries are not being awarded on the basis of family income, with just 6,000 pupils given full fee assistance.

The average worth of a means-tested bursary was £10,840 per annum, an increase of 5.9% compared with 2021. The ISC said its schools were also continuing to control fee increases, with an annual average rise of 3%.

ISC chairman Barnaby Lenon said: “Reassuringly, we have once again seen a rise in fee assistance provision, with the amount for means-tested fee assistance rising to a total of £480 million.”

He added that while partnership work between state and private schools had been disrupted during the pandemic, the census “tells us that more and more schools have been able to resume their joint working as restrictions and absence rates have become less pronounced”.

The data showed a slight decrease in the number of privately-educated pupils getting into Oxford or Cambridge, with 4.3% going to Oxbridge from the sector in 2022 compared with 5.3% the previous year.

Other universities in the Russell Group such as Exeter, Durham, Bristol, University College London and Nottingham also took fewer privately-educated pupils than the year before, according to the census.

In total, 5% of school leavers from the sector opted for a university overseas in 2022, with the USA the most popular destination.

The data also shows a slight rise in the number of all-girls’ schools, with 136 schools now exclusively for female pupils – up from 131.

Ninety-eight are all-boys’ schools, down from 102 the previous year.

Around three in 10 people are concerned they may end up homeless in the next five years due to housing costs, according to a survey.

Some 31% of people polled for Amnesty International UK said they are worried about ending up sofa-surfing or in temporary accommodation.

The campaign group is calling for safe and affordable housing to be made a human right that is protected in law.

It likened navigating England’s housing system to undertaking a “gruelling obstacle course”, with accommodation the prize for those who “make it to the end”.

And it accused the Government of rationing access to housing due to a “severe shortfall” in suitable, affordable accommodation.

Legislation requires local authorities to take “reasonable steps” to try to prevent or relieve a household’s homelessness by helping them to secure accommodation for at least six months.

But not everyone is eligible for help, for reasons including their immigration status, or being deemed to have made themselves “intentionally homeless”.

These obstacles are leaving people destitute, and risking their mental and physical health and personal safety, the organisation warned.

It said the eligibility criteria “effectively” exclude thousands of people from accessing their rights, and therefore contravene the UK’s international human rights obligations.

“Many fail to get past the first barrier because they are not considered eligible for homelessness support. Others fall through trap doors along the way.”

To accompany the report, the charity commissioned polling of 2,264 UK adults by Savanta ComRes between May 27 and 29.

It found that more than half (54%) of UK adults would assume a person was experiencing homelessness for a personal reason, such as relationship issues or drug dependency.

A smaller proportion (36%) thought this was most likely due to the Government’s failure to provide sufficient housing.

Amnesty International UK said prolonged homelessness is always a result of a systematic failure of Government to enable a person’s right to a safe home, regardless of the immediate trigger.

Chief executive Sacha Deshmukh said: “Housing is a human right, not a luxury and it needs to be protected in law.

“It’s very convenient for the Government that people often assume a person is homeless as a result of personal circumstances, but in truth homelessness is a result of a systematic failure of Government.”