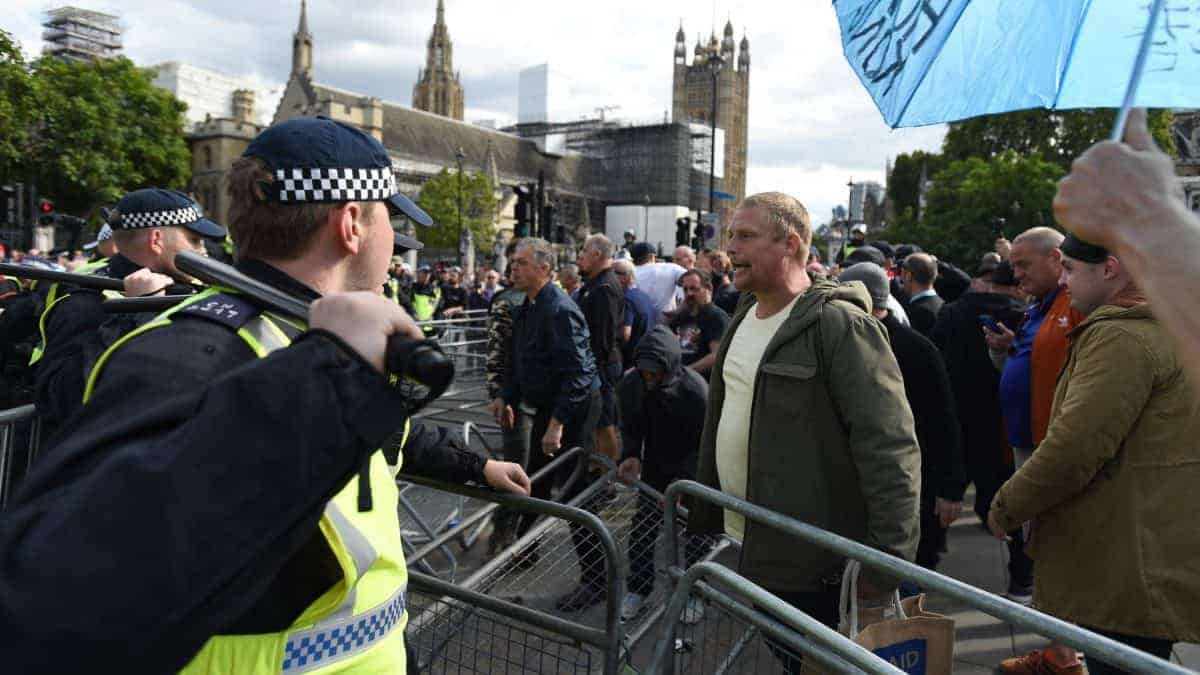 Police on horseback intervened as two groups of pro and anti-Brexit supporters gathered on Parliament Square in Westminster on Saturday.

About 200 people joined a pro-Brexit demonstration organised by the Democratic Football Lads Alliance (DFLA) while anti-Brexit group March for Change held their own protest.

Anti-Brexit MP Anna Soubry has said she was too frightened to speak at a pro- democracy rally outside Parliament, as the DFLA hurled abuse.

Owen Jones, who was assaulted last month, was approached by an angry pro-Brexit protester and had to be escorted by supporters to the stage.

Shadow home secretary Diane Abbott was escorted away from the rally by police after giving a speech. She told the rally that a bad week for Boris Johnson was about to get “much worse”.

“If his own brother can’t trust him, why should we?” she told crowds. “We are here to campaign to defend democracy. Whether you voted leave, remain, or not at all, it must be wrong that a Tory prime minister can close down parliament because its not convenient for him to hear what MPs have to say.”

As March for Change began to set up their rally, some members of the DFLA approached and began shouting.

A beer can was thrown towards about 10 people from the March for Change protest, before police intervened.

March for Change organisers said they had cancelled plans to float a Boris Johnson-shaped “blimp” due to the likelihood it would become a target.

Ms Soubry, leader of the Independent Group for Change, told organisers she was too frightened to speak due to intimidation from the counter-protests held by the DFLA.

“It’s awful but there’s also a side of me that thinks that this is our country.

“I’m a parliamentarian and I have a right to speak and I shouldn’t be frightened but it’s very, very, very disturbing, and I’m very frightened actually.”

After consulting with the police and protest organisers, Ms Soubry left the rally, telling officers she did not want to cause additional issues for them as they monitored both events.

Tom Brufatto, a director of the March for Change, said protesters were there to “demonstrate peacefully and defend our democracy”.

There were March For Change demonstrations across England, Wales and Scotland to “defend our democracy” from Boris Johnson’s “coup.”

Hundreds of people also gathered outside nearby Downing Street on Saturday, to demand Boris Johnson’s resignation.

Organised by groups including Another Europe is Possible, Momentum and the Green Party, the Demand Democracy: Johnson Out protesters said the Prime Minister was “attacking democracy”.

A human barricade of police was formed after a small group of pro-Brexit protesters started attacking police officers.

The march was eventually allowed to start, surrounded by a heavy police presence, occasionally pausing in a tense stand-off with counter-protesters.

Marchers chanted “fascist scum off our streets” and “refugees welcome”.

Ms Berry also addressed the rally in Parliament Square and praised the work of opposition MPs for proposing and passing a Bill to prevent a no-deal Brexit prior to the suspension of Parliament.

Addressing the pro-Brexit protesters on the other side of the square, she said: “That’s why they’re here today, they know they’re losing.”

Rows of police, including officers on horseback, stood between the two groups of pro and anti-Brexit protesters.

Turning the UK into a “nasty feudalistic country”

Some members of the protest organised by the DFLA were seen throwing eggs at people filming them.

He said: “Every day that passes that we remain in the European Union is a victory to our movement.

“While some call us traitors, we are not the ones trying to break up this country and turn it into an English, white nationalist country, they are.

“We are not the ones destroying the rights of migrants, they are. Just like all things, good will triumph over evil and Brexit is evil.”

The MP also accused Leave-supporting politicians, including Jacob Rees-Mogg, of aspiring to turn the UK into a “nasty feudalistic country”.

Speaking about the possibility Parliament will be suspended next week, he added: “We MPs will continue to sit in Parliament and we ask you to set up a community People’s Parliament across the country.”