A growth before October the 31stof what can only be described as a ‘fevered atmosphere’ accompanied by the sort of emotions seen during the latter part of the afternoon, may well cause fractures that will take years to repair whatever the Brexit outcome. 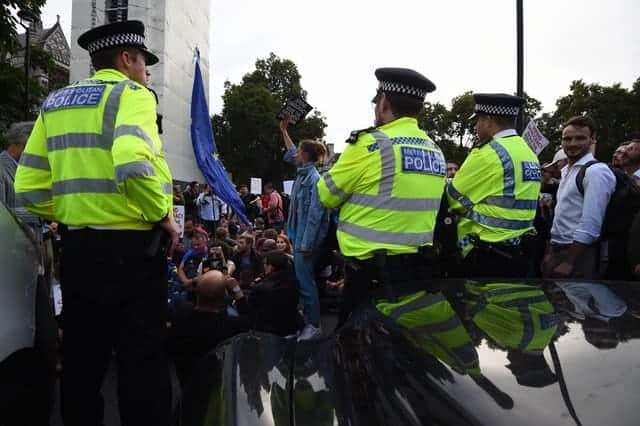 As counter-protests clash over Brexit again, former Trident police officer Chris Hobbs describes his concerns and what he witnessed around last Saturday’s Stop The Coup demonstration.

The day of national ‘stop the coup’ protest began predictably enough: Those of us who had, over the last 18 months, observed protests of both the right and left in central London, knew that those of the right would gather at the Lord Moon of the Mall Weatherspoon’s pub situated at the top end of Whitehall.

One of their number, who was clutching a megaphone, looked like a refugee from the 60’s with his short-cropped hair, braces, jeans and ankle length brown boots. He informed those passing that ‘immigrants had taken our jobs and homes.’

At precisely midday, this group moved office followed by a dozen police officers. They made their way down Whitehall drawing attention to themselves with their interminable ’Tommy, Tommy song.’ The group eventually began to meet ‘Remainers’ who, to the relief of police totally ignored them. One officer told me that as no restrictions had been placed on this protest, they were unable to prevent rival groups mingling.

To everyone’s surprise, the Robinson group, emerged unscathed as a result of their walk through their opponents and reached Parliament Square before pausing as if uncertain as what to do next. They eventually marched to College Green, and then……. marched back again.

Whether this group had football matches to attend is a matter of conjecture but their presence appeared to evaporate from that point.

However, as the Robinson group dissipated, the notorious pro-Brexit Yellow Vests appeared. Their attempts to emulate their French counterparts have long since faded and over the months their numbers have reduced from around 100 to 30. They conspicuously gathered in Whitehall and were largely ignored apart from one youth who barged his way through them.

This sparked outrage from the ‘Yelling’ vests who surrounded nearby police officers, rather in the manner that irate footballers surround the referee, demanding that the youth be arrested and accusing officers of being biased.

Meanwhile, on Parliament Square opposite Parliament itself, a group of Ravidass Sikhs continued their own protest totally unphased by events around them.

There was little indication that the relative serenity of the afternoon was to change as a small group of five vocal men carrying a large ‘Brexit Now’ banner emerged from the direction of College Green and walked past Parliament intending to stroll up Whitehall. To do this, they had to pass through large numbers of Remain supporters. The result was amicable chaos. Some held up EU flags in front of the banner, but on both sides, there were smiles and banter.

As the ‘Brexit Now’ group moved up Whitehall, their numbers increased to about twenty and police decided to escort them; the objective being to take them to the top of Whitehall where it was hoped they would disperse.

At the Trafalgar Square end of Whitehall however, the crowds were much denser in the vicinity of the various pubs. It would seem that leftist activists believed some from the right could be found inside. As the Brexit group encountered the leftists, the atmosphere changed. There was no banter, just hostility and chants of ‘Nazi scum off our streets.’ Thus, it would seem, unlike their counterparts at the opposite end of Whitehall, these activists held the view that all who support Brexit, must, by default, be racist.

Police decided that escorting the ‘Brexit Now’ protestors through the ranks of hostile left-wing activists was now not an option and the group was escorted back down Whitehall. However, leftist ‘anti-racists’ followed, hurling abuse at the small group as they did so. Oddly, both sides passed and ignored the group of yellow vests who strangely opted not to assist their pro-Brexit ‘colleagues.’ As both parties reached the cenotaph, anti-racists got in front of the small group and the procession ground to a halt.

It was an impasse. Police protectively surrounded the pro-Brexit group, while anti-racists surrounded both the police and the group. The rest of this section of Whitehall was totally bereft of officers. Clearly police had to wait for reinforcements.

After about 15 minutes, all hell seemed to break loose on the adjacent footway. It seemed that something had drawn the attention of the anti-racists. My initial thought was that it was another pro-Brexit group.

The melee moved quickly along the pavement as the hostile crowd became a baying mob. As I moved closer to the centre of disorder, I could see the object of the mob’s venom; it was Tommy Robinson’s deputy, Danny Thomas known as Danny Tommo. He was alone and clearly in serious.  trouble.

One police officer managed to fight his way through the mob and got in front of Thomas skilfully using a combination of verbal commands and pushes to protect an individual who makes no secret of his total contempt and loathing for police. I confess I barged into the group to help the officer then saw several of the officer’s colleagues push their way through to assist.

The melee continued around the corner to Westminster Station where fortunately there was a contingent of British Transport Police officers who helped keep the mob at bay while Thomas was able to slip down to the platforms and get away.

Given the abuse and physical attacks directed at police by Robinson supporters over the past two years it will be interesting to see any comments made by Thomas in respect of this incident.

The other small Brexit group by the Cenotaph took advantage of the distraction and managed to make their escape. All that was left were singing, chanting activists at the top of Whitehall who, facing ranks of officers and police vehicles, eventually melted away but only after the much publicised arrest of Green party assembly member Caroline Russell, who apparently refused to comply with police directions.

The afternoon however, mirrored the deep divisions within the country and also, interestingly, confirmed divisions between those on the right.

However, a similarly attended ‘Remain event’ accompanied by a well organised counter protest as opposed to several ad-hoc ones, bearing in mind that Tommy Robinson is shortly due for release, could well be extremely problematic for under pressure police.

A growth before October the 31stof what can only be described as a ‘fevered atmosphere’ accompanied by the sort of emotions seen during the latter part of the afternoon, may well cause fractures that will take years to repair whatever the Brexit outcome.