Scotland Yard has released images of two men officers want to speak to in connection with the attack at a Tommy Robinson rally in central London. 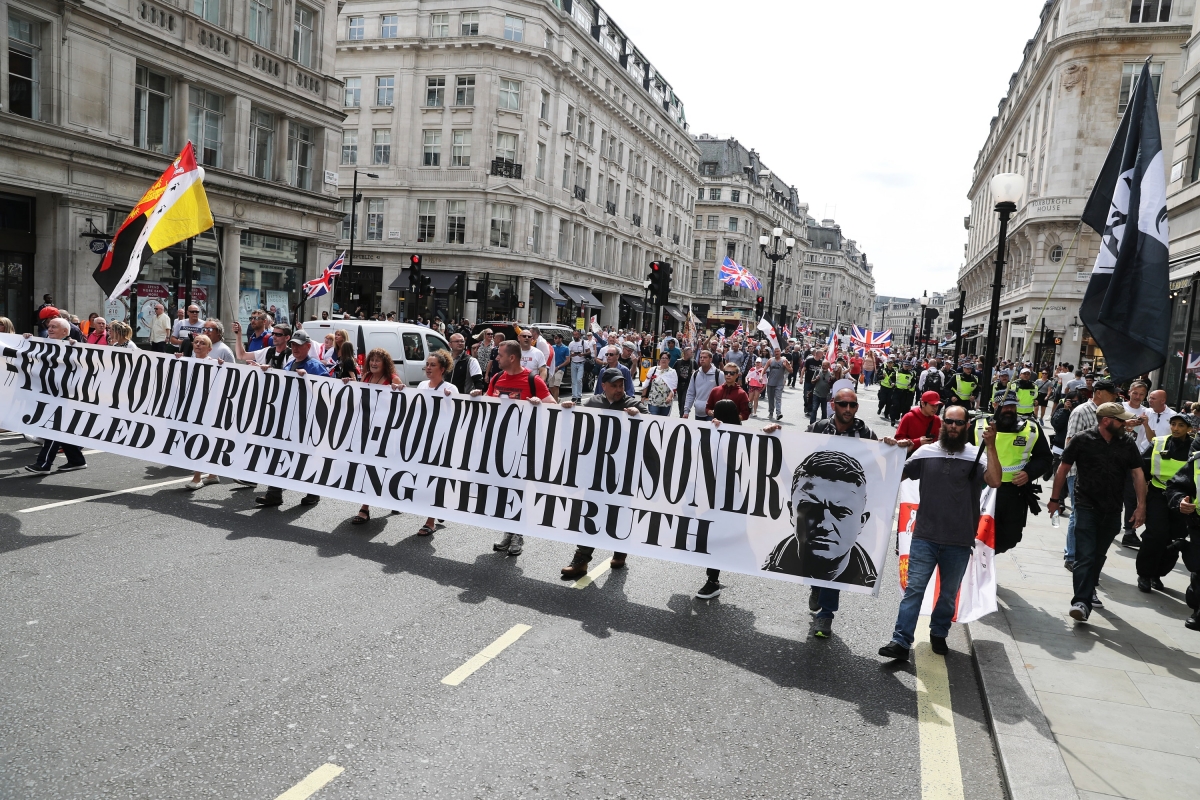 A police medic was dragged to the ground and kicked in the head during a “sickening and cowardly” attack at a “violent protest”.

The assault happened during a rally in support of jailed Tommy Robinson and a counter-demonstration by an anti-racism group in central London on Saturday, police said.

Video footage appearing to show the male medic being dragged to the ground and surrounded by a group of Tommy Robinson supporters was posted on social media.

Hundreds of protesters gathered in Oxford Circus and marched down Regent Street, chanting “We want Tommy out”.

A counter-protest by groups including Stop Tommy Robinson and Stand Up To Racism was also held in the same location, the Metropolitan Police said.

The police medic was pulled to the ground and kicked in the head by a man when a group of protesters attempted to breach a police cordon at around 1.20pm, the force added.

On Tuesday, Scotland Yard released images of two men officers would like to speak to in connection with the incident.

Superintendent Roy Smith, who policed the demonstration, branded it a “sickening and cowardly” attack.

He added: “Attacks on police officers, as with an attack on any emergency service worker, are attacks on the basic fabric of a civilised society.

“The sole purpose of deploying police medics to an event is to ensure the safety of those attending and provide care to those who require it.

“We have a dedicated team in place to investigate incidents like this at public order events, and rest assured we will not stop until those responsible are identified and brought to justice.

“I would urge anyone who has information relating to this sickening and cowardly attack to come forward, which you can do in complete confidence.”

Robinson, whose real name is Stephen Yaxley-Lennon, was handed a nine-month sentence at the Old Bailey last month – of which he will serve just nine-and-a-half weeks – after he was found to have committed contempt of court.

The 36-year-old, from Luton, Bedfordshire, had filmed men accused of the sexual exploitation of young girls and live-streamed the footage on Facebook, in breach of a reporting ban, outside Leeds Crown Court in May 2018.

Anyone who recognises the two men can call the police public order investigation team directly on 0208 246 0076 or Crimestoppers anonymously on 0800 555 111.