A 'whole ward' of Covid patients are being admitted to Nottingham's hospitals every day. 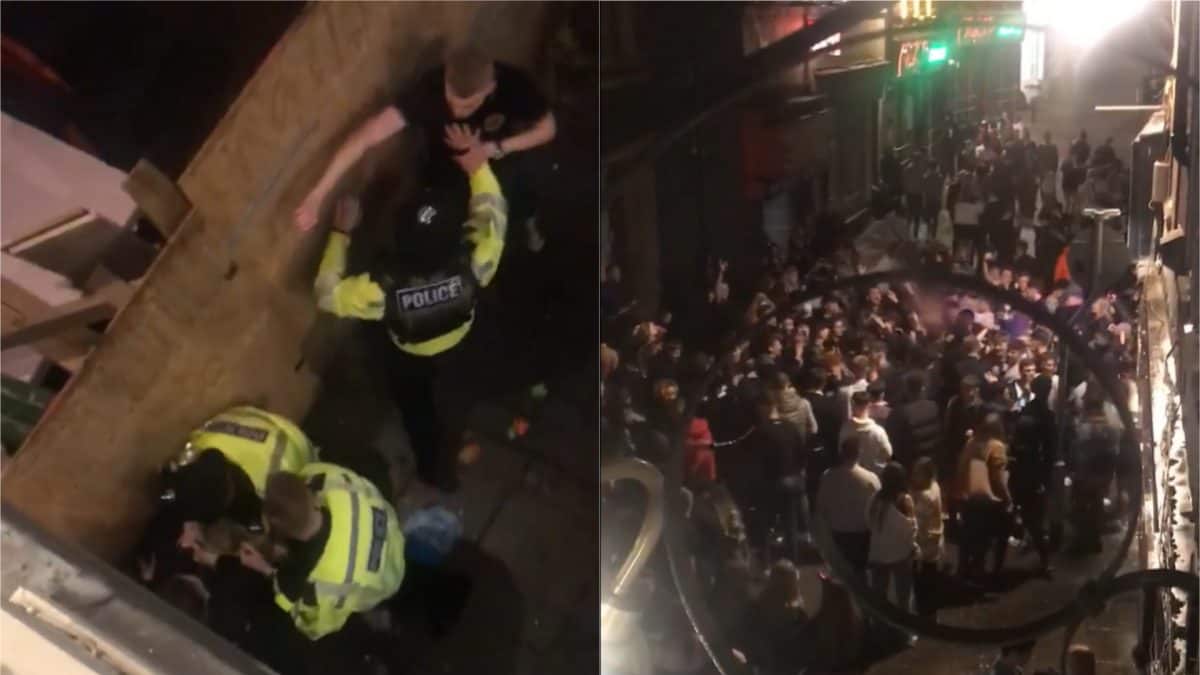 Police in Nottingham have warned students “you will be punished” after dozens of young people in Halloween fancy dress were confronted by police in the city ahead of Tier 3 rules being implemented.

Nottingham was placed into the “very high” bracket on Friday at 12.01am, with new rules coming into place such as a ban on buying alcohol from shops after 9pm.

However, local maths teacher Simmy Purwaha filmed the moment police had to intervene as dozens of densely-packed youngsters broke social distancing guidelines to dance together on St James Street.

This was the scene in Nottingham last night before Tier 3 restrictions came into place.

“Mixed with booze it’s a recipe for disaster,” the 25-year-old told the PA news agency.

A ‘whole ward’ of Covid patients admitted every day

The footage has been released after Nottinghamshire’s director of public health warned that the number of new patients admitted to hospital each day is “enough to fill a whole ward”.

Figures show the numbers are 40 per cent “above and beyond” the levels seen during the first wave of the pandemic.

Nottingham University Hospitals alone admitted 49 new patients on Wednesday, with the same number of people dying across the three hospital trusts in the seven days to October 28.

Jonathan Gribbin warned that even the best NHS systems will “struggle to cope” with the increased pressure.

“Across the Nottingham and Nottinghamshire ICS, two days ago bed occupancy stood at 361,” he said.

“Yesterday (October 28), it stood at 413. And that I think straight away gives you an indication of how quickly it is increasing.

“As of yesterday that 413 figure represents about 40 percent over and above what we saw in wave one peak back in April time.

“In fact, at NUH yesterday there were 49 patients – more than a ward – who were admitted with Covid-19.

“Even a well-organised NHS and care system will struggle to cope with that kind of increased demand.”

Elsewhere, Nottinghamshire Police were forced to break up a 40-strong party in students halls at Nottingham Trent University, with a bag of cocaine and a PA system seized.

Assistant Chief Constable Kate Meynell said: “As we’ve said time and again, the very last thing we want to be doing as police officers is to be issuing these fines, but we have a responsibility to enforce the law and to keep people safe.

“We take that responsibility very seriously and we will continue to take action against people who wilfully break the rules in this way.

“It is perfectly clear that these kind of gatherings are not allowed and there really is no excuse for what we saw last night.”

Once identified, the party hosts will be facing a fine of £10,000 for organising an inside gathering of more than 30 people, the force said.

Ms Meynell added: “This pandemic is a serious risk to public health.

“Cases are rising fast and more people are getting seriously ill as a result.

“We expect people to follow and obey the law and hope that this latest incident serves as a warning to others – that if you do break the rules in this way you will be caught and you will be punished.”

Before youngsters were pictured in Halloween costumes and drinking in large groups, the force had issued a warning that people who deliberately flouted the rules would be fined.

Mr Purwaha, who filmed a police intervention in the city centre, told PA: “The actual shenanigans started at about 9.55pm when all of the bars let the patrons out at the same time onto a small lane.

“It went on for about 20 minutes before enough police turned up to send people on their way.

“One person was arrested in front of me and another was lying unconscious.

“They were chanting World Cup football chants which didn’t make sense as there isn’t any football on.”

In the nearby market square, youngsters were seen posing for photographs dressed as minions from the film Despicable Me and chanting near police vehicles.

Mr Purwaha added that he feels students have been “given a hard time” by the Government and it is a minority of students who are flouting lockdown rules.

“That doesn’t excuse the awful behaviour on display yesterday,” he added.

“Although it’s a minority of students, they’re taking the piss and ruining it for the rest of us who want to go for a drink but will be unable to without purchasing a meal.”

Nottinghamshire Police had issued a warning earlier on Thursday that they would have “no hesitation” in fining people deliberately flouting the rules.