Santino Angelo Dymiter, 18, was the fourth teenager to be stabbed to death in London in just 15 days. 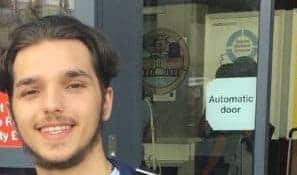 London’s latest teenage knife murder victim was chased through an estate before being stabbed in his neck and left to die, according to shocked eye-witnesses.

The victim – an 18-year-old boy of East European origin known locally as Santino, was the fourth teenager to be knifed to death in the capital in just 15 days.

Relatives of London’s latest teenage knife murder victim wailed and screamed as they placed flowers at a makeshift memorial where he was killed.

The lad, thought to be Polish, was the eighteenth teenager to be murdered in London this year.

A large group of family members – including the victim’s mum, dad, two younger brothers – joined grieving friends of the boy at a growing memorial strewn with flowers and messages.

Grandparents, aunties and uncles were also there in tears with some keeled over and wailing loudly at the memorial just yards from the murder scene.

Santino’s uncle, who was trying to console the victim’s tearful young brother, said: “Everything is just too fresh to process right now.”

A family friend, who was cutting flowers to size and placing them in water at the memorial paid tribute to the “kind” young man.

She said: “He was a kind and loving boy.

“Anyone who knew him at a friendship level would agree.

“My kids were good friends with him. My daughter couldn’t bring herself out of the house to pay her respects. She’s broken.

“I know most of the boys around here by their tag names, but I knew Santino by his first.

“He was always respectful to me and my family and that’s what matters.

“Everyone has something bad to say about people who get caught up in situations like these.

“Someone will always bring up the dirt.

“He could have been a millionaire and someone would have had something bad to say about him.”

The boy is believed to have been chased and knifed after getting into an argument over money in a nearby kebab shop.

Terry Eddis, 73, who has lived in a terraced house on the Chadd Green Estate for 34 years, said he heard sirens at around 3.30pm on Monday afternoon.

Grandad-of-one Mr Eddis said: “A police car pulled into my drive and flew past my house before stopping at the end of the road.

“One officer ran straight over to the man who was lying on the curb and another followed shortly after with a big brown bag.

“An ambulance then showed up and was holding a drip above the victim trying to save his life.

“There have been three stabbings in this area in about four months.

“A boy was knifed in the neck with a Stanley knife by attackers after his mobile phone just outside Plaistow station.

“He was with his dad. He couldn’t do anything.

“Another man was stabbed with a broken bottle, leaving him with a punctured lung.

“We’re getting used to this now.

“Things have been getting worse for about two or three years.

“There used to be police patrols. They would either be in pairs, on foot or cycling.

“But they don’t come around here anymore.”

‘When they knife someone, they aim to kill.’

A lone bouquet of flowers had been left outside a house near the murder scene.

A young man from the neighbourhood, studying for his A-levels, said: “It’s not safe to live around here.

“When they knife someone, they aim to kill.

“They have an arrogant mindset and don’t care about the consequences.

“I just keep my head down and try to stay out of it.

“I’m getting an education so I can become an engineer and get out of here.”

Detective Chief Inspector Laurence Smith said: “Santino was stabbed in the street, in the middle of the afternoon.

“I am certain that this brutal attack, or the aftermath, will have been witnessed by a number of people, some of whom may not have come forward.

“The suspects fled the scene into Pelly Road, in a black Ford S-Max, which was found abandoned soon after on Stansfeld Road, E16 with extensive damage and two flat tyres.

“Did you see this vehicle prior to, or after the attack?

“The scene is close to Plaistow Underground Station and the area would have been busy.”

Metropolitan Police said an ‘urgent’ investigation into the suspected murder is underway. Anybody with information is asked to contact the force using 101, quoting CAD 5133/aug26. Alternatively to remain anonymous, dial Crimestoppers on 0800 555 111.