A young policewoman became unwell after having to stand in the sun while Boris Johnson spoke and fielded awkward questions. 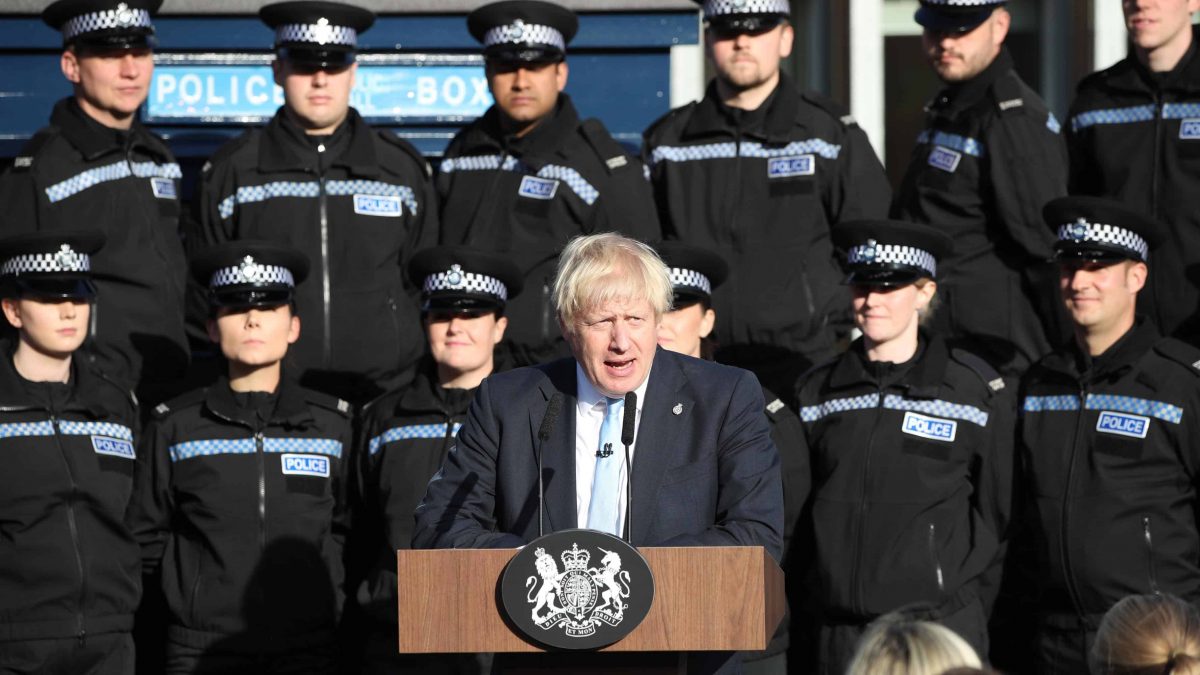 Boris Johnson has been accused of abusing his power by speaking about Brexit as he stood in front of lines of new police recruits – one of whom became unwell and had to sit down while he spoke.

The Prime Minister was condemned as having used the student officers as an “inappropriate” backdrop as part of a “political stunt” when he made a speech which ended up referencing a possible general election and criticising Jeremy Corbyn.

Around 35 officers had been standing behind his lectern, in front of an old-style police box, for at least 20 minutes before the speech even began at West Yorkshire Police’s operations and training complex in Wakefield.

Mr Johnson had finished his speech and had answered a number of questions from journalists seated behind the officers in the audience, when it became clear a policewoman standing behind his right shoulder was not feeling well.

He turned to ask the officer if she was OK and she sat down behind him.

Despite saying: “I’m so sorry, OK that is a signal for me actively to wind up”, he continued to criticise the Labour leader for not going along with his plans for a snap general election.

The officer then stood up minutes later as Mr Johnson finished his speech.

Mr Burns-Williamson said: “To use police officers as the backdrop to what became a political speech was inappropriate and they shouldn’t have been put in that position.

“It clearly turned into a rant about Brexit, the Opposition and a potential general election. There’s no way that police officers should’ve formed the backdrop to a speech of that nature.”

Asked if Mr Johnson should apologise, he said: “Yes, because he’s used the pretence of an announcement around police recruitment for mainly a political speech.”

Mr Burns-Williamson said he had expressed his concerns to the Chief Constable of West Yorkshire Police and asked for an explanation around what happened.

Yvette Cooper, the chairwoman of the Commons Home Affairs Committee, also criticised Mr Johnson’s use of police officers as a backdrop.

The Labour MP for Normanton, Pontefract and Castleford, in West Yorkshire, said: “This is an abuse of power by Boris Johnson, making so many police stop their training and work to be part of his political stunt.

“They have a job to do here in West Yorks, and they train and work hard for the whole community – completely unacceptable to use them in this way.”

Labour’s shadow policing minister Louise Haigh has written to the Cabinet Office to ask how many officers had rest days cancelled or were taken away from their duties to attend the event, and whether the West Yorkshire force’s chief constable had been told the event would “stray beyond the police recruitment campaign when the request was made to supply officers”.

John Apter, chairman of the Police Federation of England and Wales said: “I am surprised that police officers were used as a backdrop for a political speech in this way.

“I am sure that on reflection all concerned will agree that this was the wrong decision and it is disappointing that the focus has been taken away from the recruitment of 20,000 officers. This is what we should be talking about, this is what is important.”

As he finished speaking, all the police present stood up and Mr Johnson went over to check on the stricken officer.

She was then attended to by colleagues.

Craig Grandison, vice chairman of West Yorkshire Police Federation said the woman is “OK and the Federation is looking after her wellbeing”.

He added: “Today’s event was supposed to be centred on police recruitment and additional investment in the service, which is much needed. We are in touch with the force regarding today’s events and will be making no further comment.”