Ian Blackford replied that the last thing the people of Scotland want is a hug from you Prime Minister. Caledonia and me both. 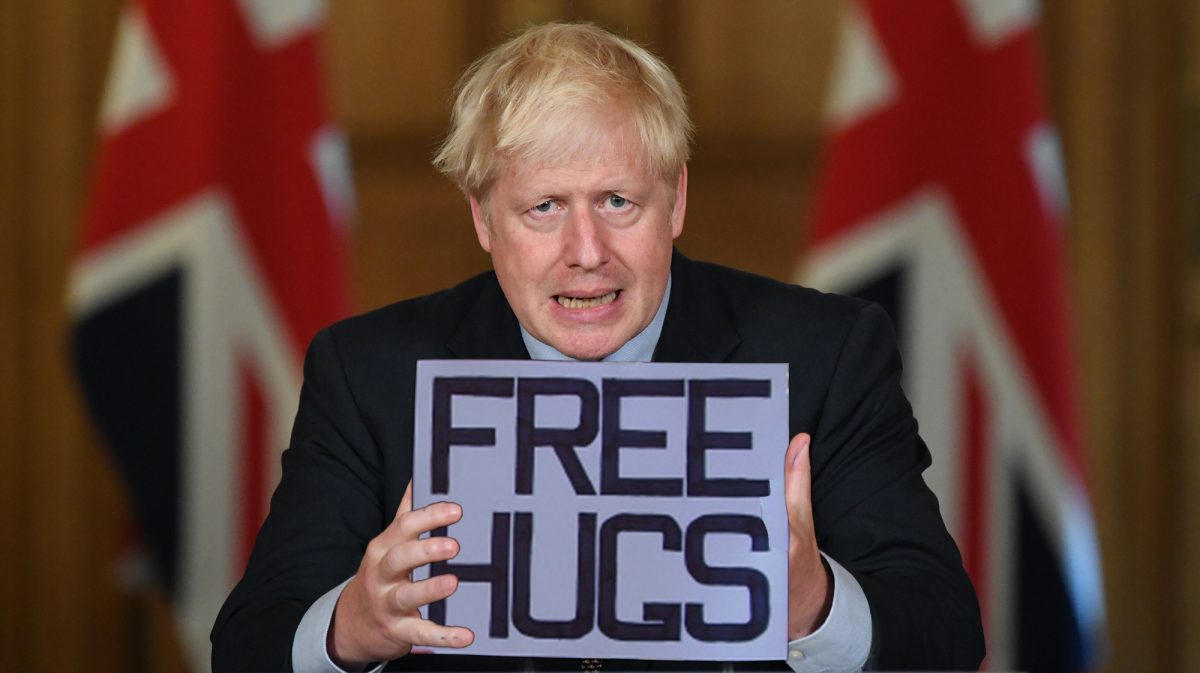 *Throw your arms around the world at Xmas time*… unless the PM has cancelled it.

Christmas has come so early this year that we aren’t going to have one.

Band Aid famously wanted to feed the world, but by the look of the shelves at my local supermarket, just feeding Lambeth could be a stretch for this Government.

For a PM blaming humans for transmitting the virus there was a lot of talk today about hugging, mainly the PM, which I guess many women out there have done and bitterly regretted it. Maybe he told them he could cure a long-term ailment with his touch to lure them in. In Johnson’s world there is no such thing as a free hug, you will be paying for it later.

The problem for the Government is that for every slogan there is an opposing one. ‘A stitch in time saves nine’ can easily be swapped for ‘you can’t paper over the cracks,’ and that is what Starmer pointed out today.

The PM, who always looks astonished when he is scrutinised, used his spirit of ‘togetherness’ defence to try and stifle Starmer’s questions.

However when 60 odd million of us went into lockdown where was the togetherness when his Chief Advisor went walkabout, in a car, for 260 miles, and then a day trip etc etc.

Starmer wasn’t having this thrown at him, again. He sternly, like a PE teacher who has just got his first job as Head of Year, said: “My wife works for the NHS, My mother worked for the NHS. My sister works for the NHS So I’m not going to take lectures from the Prime Minister on supporting the NHS.” Sorry Sir (literally).

The PM created a mess, as ever, yesterday when he told Stephanie Peacock (Lab) that test and trace had no bearing on the coronavirus. He ignored that then he defended Dido Harding for how well she had done with Test and Trace, which isn’t true and now apparently doesn’t matter.

Every time the PM cites the NHS test and trace he perpetuates the idea it is run by the NHS. It isn’t. It was outsourced to the private sector and given without competition to horse lover and David Cameron hugger Dido Harding.

Starmer tried, again, to explain to the PM that it wasn’t necessarily that children have Covid, but that they constantly have coronavirus like symptoms, and if they can’t get a test, then they can’t go to school.

I’m starting to think the PM isn’t avoiding the question he just doesn’t get it. Like a starfish trying to switch energy supplier.

The PM was asked numerous times about extending the furlough scheme in response to Ian Blackford’s question on the matter. He said the government will ‘put their arms around people’ and come up with ‘creative and imaginative schemes to keep people in work.’

Blackford replied that the last thing the people of Scotland want is a hug from you Prime Minister. Caledonia and me both.

All the furlough questions made me wonder where Rishi Sunak has been lately. It is pretty obvious ‘creative and imaginative schemes to keep people in work’ involves the Chancellor staring at a piece of paper that simply says “another u-turn?”’

So as you sit down for a lonely lockdown Xmas dinner, with no Turkey, Veg and definitely no toilet roll remember…

*There’s a world outside your window, and it’s a world of dread and fear.

*Where the only flowing water, is the bitter sting of tears.*

Merry Xmas and lots of virtual big (not Boris) hugs.