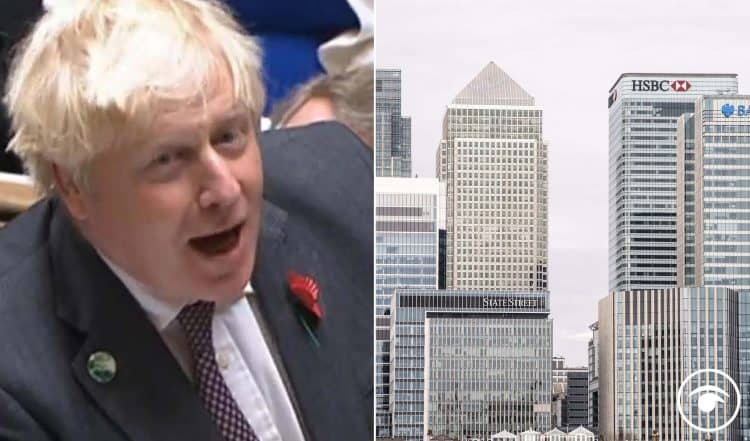 Boris Johnson defended the contribution of bankers to the economy when challenged over rising household bills ahead of Christmas.

The Prime Minister came under fire for a Budget policy to cut the banking surcharge in April 2023, which is expected to save banks £4 billion in taxes over five years.

Labour deputy leader Angela Rayner said this contrasted with tax rises of £3,000 per household in the coming years.

After trading blows over the standards rules governing the behaviour of MPs, in light of the case of Conservative former minister Owen Paterson, Ms Rayner switched attention to the impact of the Budget.

She told the Commons: “The Resolution Foundation found that by 2026, taxes will be £3,000 more per household since he took office.

“My constituents and his constituents are feeling the pinch and they are worried about Christmas as well, their bills are going up every week and the Budget did nothing to help them.

“So can the Prime Minister tell them how much was the tax cut that he gave to the banks instead?”

Mr Johnson replied: “As she knows very well, it is the banks and the bankers who are paying far more proportionally as a result of our tax measures to cover the cost of the NHS.

“The £36 billion, 50% of it comes from the 14% of the richest in this country, overwhelmingly from the banks and financial services industry who can pay the most.

“And the astonishing thing, when it came to voting for that £36 billion increase in 48 new hospitals, in 50,000 more nurses, in looking after our public services, they (Labour) voted against it.”

Ms Rayner, who was standing in for Labour leader Sir Keir Starmer as he isolates due to Covid-19, countered: “It was £4 billion in tax cuts to the bankers and £3,000 of tax rises per household.

Ms Rayner went on to ask why a £1.3 billion cut to day-to-day defence spending was “hidden” in the Budget, adding: “Will our servicemen and women face pay cuts or will there be fewer of them with less support?”

Mr Johnson said it was “quite incredible” to be hearing such questions from Labour before claiming that members of the party previously wanted to “abolish the army”.

He said: “What you’ve got from this Government is spending on defence which is the highest since the Cold War, the biggest uplift since the Cold War and an increase that has restored confidence in this country around the world in our ability to defend not just our own shores but to defend our friends and partners as well.”

Ms Rayner replied: “I won’t take party political lectures from him because too often the Government’s actions don’t match their words.”

She pressed for extra support for veterans, including reinvesting money from cancelled Ministry of Defence contracts.

Mr Johnson said the Government’s economic policies had enabled it to invest “massively” in the NHS and defence, adding: “I enjoy my conversations with her despite of the insults, the party political points she directs towards us.

“I don’t want to cause any further dissension on the benches opposite but I think you’ll agree she has about a gigawatt more energy than (Sir Keir).

“But it’s the same old Labour – no plan, no ideas, we’re getting on with delivering on the people’s priorities.”