Morgan said he wants to prove that "cancel culture" is as "dangerous to society" as coronavirus has been. 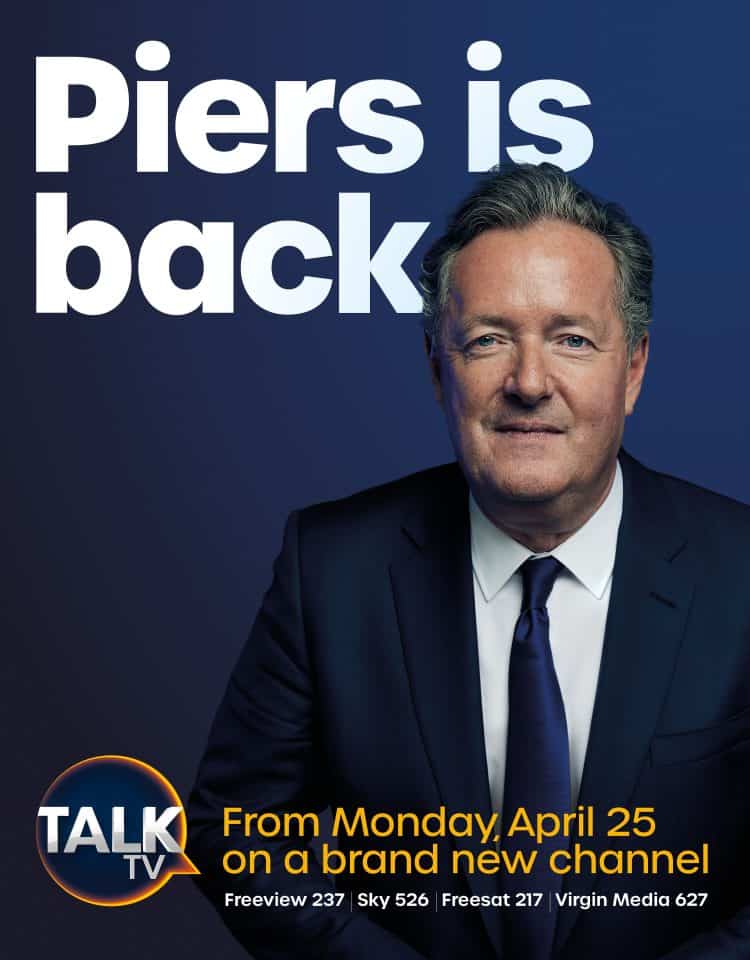 Piers Morgan has said he wants to “uncancel those who have been cancelled” and branded his departure from ITV last year a “farce” as he prepares to launch fledgling news channel TalkTV.

The former tabloid editor left ITV after storming off the set of Good Morning Britain when he said he did not believe Meghan’s claims from her Oprah Winfrey interview.

His comments sparked more than 50,000 complaints, the most in Ofcom’s history, but the watchdog ruled that Good Morning Britain was not in breach of the broadcasting code over Morgan’s controversial comments.

TalkTV will launch with shows from Morgan, Sharon Osbourne and Tom Newton Dunn on Monday April 25.

‘The whole thing was a farce’

“I thought the whole thing was a farce and I’m delighted that actually, as a result of the farce, we’ve ended up with a whole network which is now dedicated to preventing that kind of farce from recurring,” Morgan said.

“You shouldn’t be shamed or vilified or cancelled for having an opinion, unless you genuinely are spewing hateful bigoted stuff,” he added, speaking ahead of the channel launch.

“I don’t intend to do that; I’ve never done that before in my broadcasting time. I want to be a broad church to any kind of view.”

Speaking alongside Osbourne, who appeared via video from the US, he explained: “I want to re-platform those who’ve been de-platformed.

“I want to uncancel those who have been cancelled. I want to basically make a point that cancel culture is as dangerous to society, in its own way, in terms of its attack on free speech and freedom of expression as coronavirus has been.

“And could be over the next few years and decades actually more dangerous.

“So, I think if a democracy, like ours, or America or Australia, where this show will be airing, if a democracy loses that sense of what free speech means, and stops defending an individual’s right to an opinion, you’re not a democracy.

“This show, I hope, and the network will be standing up for democracy.”

Osbourne will appear on hour-long panel debate show The Talk, which will air at 9pm.

She said: “This is a whole new thing for me to be involved in the beginning of a network and to be on a network that doesn’t stand for one thing.

“Because usually, and especially here in America, a network stands for the right or the left, or whatever it is. This is just basically the news with different people’s views on it, by experts mainly, I’m not an expert, but I’ve definitely got an opinion on everything.

“It’s new, it’s innovative, it’s a place for everyone that’s interested in what’s happening in the world to go to, without being told what they should be thinking.

“We’re not telling anybody that they shouldn’t be thinking the way we think, we’re just expressing and opening up the conversation for people to take on even at home after we finish talking.”