“If you have not seen it yet, you will enjoy this. Trust me," a journalism tutor has said. 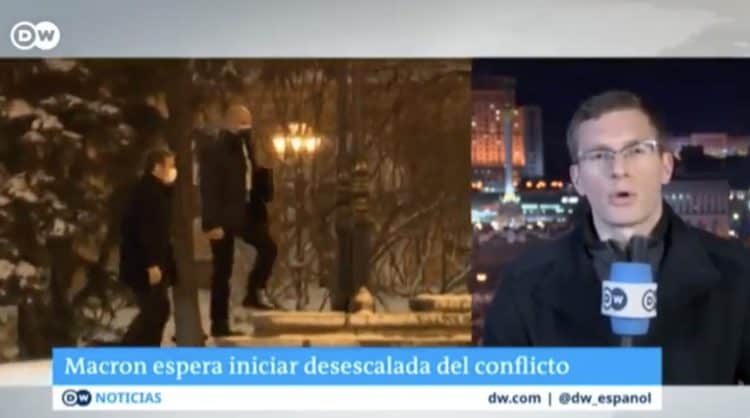 A journalist reporting from Kyiv has sparked thousands of reactions after jumping between six languages whilst covering the Russia-Ukraine conflict.

The journalist, who was born in Luxembourg to a German mother and a British father and is usually based in Washington according to his website, racked up over 10 million views at the time of writing and 87,000 likes.

Jay Rosen, journalism tutor at New York University, reacted to the video: “If you have not seen it yet, you will enjoy this. Trust me.”

Meanwhile, Russia has sent troops into eastern Ukraine, claiming they are doing so for “peacekeeping” – but the west argued Russia was just finding a pretext for invading their neighbour.

Russia’s president Vladimir Putin sent the troops in the two breakaway regions of Donetsk and Lugansk after publishing a decree and saying Moscow would recognise their independence.

But Western countries have warned the move is illegal and destroys peace negotiations, according to Reuters.

UK health minister Sajid Javid said it is clear that Putin decided to attack Ukraine’s sovereignty and believes an invasion has already begun.

He said: “We are waking up to a very dark day in Europe and it’s clear from what we have already seen and found out today that the Russians, President Putin, has decided to attack the sovereignty of Ukraine and its territorial integrity.

“We have seen that he has recognised these breakaway eastern regions in Ukraine and from the reports we can already tell that he has sent in tanks and troops.

“From that you can conclude that the invasion of Ukraine has begun.”

Ukraine’s ministry of foreign affairs has condemned Russia’s decision to recognise the two regions as independent states, saying the move has “no legal implications” and “sharply escalates the situation”.

A statement released today by Ukraine was quoted by The Guardian: “The Ukrainian side understands Russia’s intentions and its objective to provoke Ukraine. We are taking into account all the risks and not giving in to the provocations as we remain committed to politico-diplomatic settlement of the Russian-Ukrainian armed conflict.”