Inflation drove petrol prices to 149.12p per litre - meaning it would cost £81.95 to fill a typical family car. 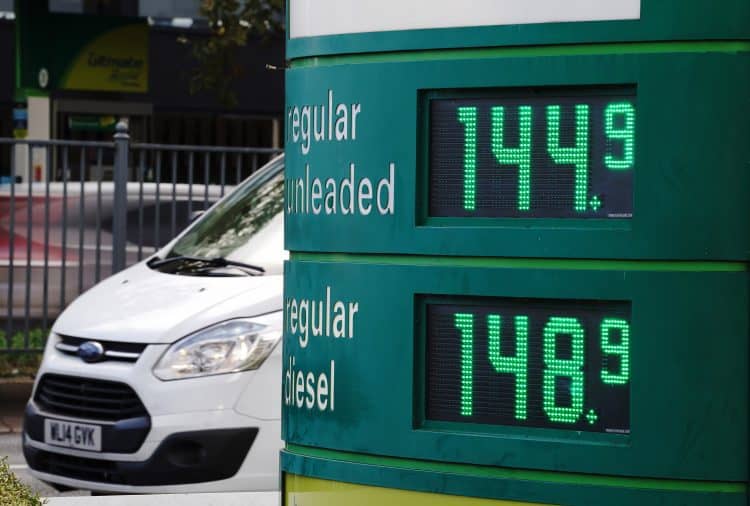 Petrol prices soared to record highs on Monday, piling the pain on motorists amid the UK’s worsening cost-of-living crisis.

Motorists’ organisation the RAC blamed the rise on profiteering by petrol retailers and stubbornly high oil prices sparked by ongoing tensions between Russia and Ukraine.

“The relentless rising price of fuel is hurting households up and down the country, furthering the cost of living crisis,” RAC fuel spokesperson, Simon Williams, said.

The threat of a Russian invasion of Ukraine has driven up oil prices, with a barrel of Brent crude up 0.6 per cent to $94 (£69) on Monday.

But the RAC accused forecourt operators of unnecessarily inflating prices for motorists.

“While the price of oil is still close to $100 a barrel, wholesale fuel prices don’t merit further retailer rises across the board at the pumps,” Williams said.

“We realise that smaller retailers who don’t buy fuel as frequently will be hit by higher wholesale costs but the biggest retailers who buy all the time shouldn’t currently be increasing their forecourt prices. We urge them to play fair with drivers at this difficult time.

“Tension between Russia and Ukraine is still weighing heavy on the oil price but there is now a glimmer of hope that more oil may come on to the market from Iran due to a possible nuclear agreement with the US to end sanctions.”

Spiralling fuel prices are likely to worsen the cost-of-living crisis, which has been exacerbated by tax rises and high energy costs. Inflation has already reached a 30-year high of 5.5 per cent – and could reach 8 per cent in April.

‘Something has to give’

That drives up costs for businesses as well as consumers.

“As a business that ships throughout the UK, we rely heavily on the courier network, which will inevitably pass on the rising fuel prices in what is termed the ‘fuel surcharge’. The big question is, do we pass that on to our own customers?

“Wherever we can, we try to absorb these costs as much as we can but margins are being squeezed everywhere. Something has to give and, unfortunately, smaller businesses, as ever, are the ones to suffer.”