The e-petition will go before the petitions committee.A separate, pro-prorogation petition, will also be debated by the committee. 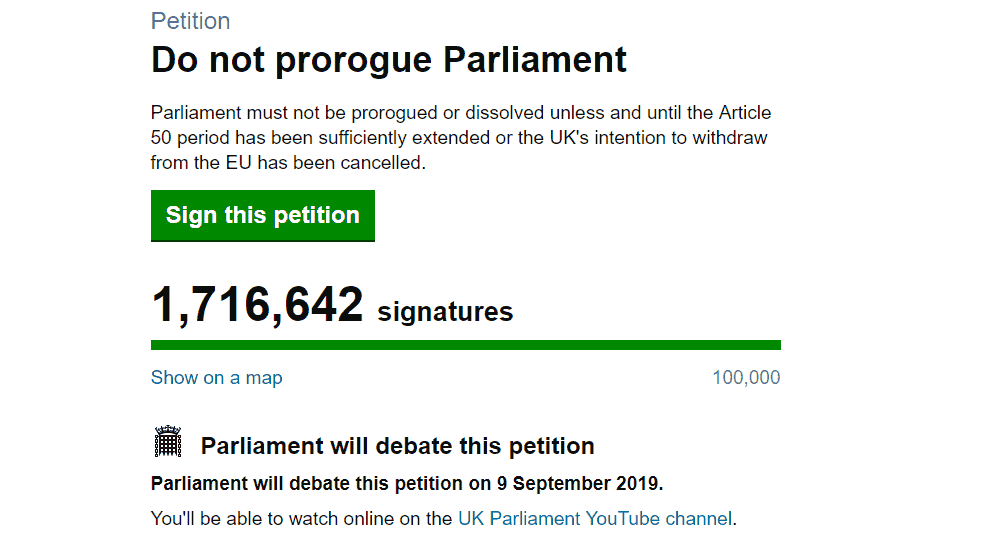 An online petition calling for the Government not to suspend Parliament will be debated on Monday.

The e-petition has more than 1.7 million signatures and will go before the petitions committee.

A separate, pro-prorogation petition, will also be debated by the committee.

The second appeal, which asks that “the Prime Minister advise Her Majesty the Queen to prorogue parliament” to “prevent any attempts by parliamentarians to thwart Brexit”, has more than 100,000 signatures.

The pro-prorogation appeal was launched back in February, and on March 18 the Government responded and said: “The Government has no plans to prorogue parliament and remains committed to delivering an orderly exit from the EU in line with its pledge to deliver on the outcome of the referendum.”

Thousands joined protests across the UK within hours of the move being announced.

Critics, including Commons Speaker John Bercow, called the decision a “constitutional outrage”, designed to stop MPs from intervening as the UK heads towards a no-deal Brexit on October 31.

But the protests were dismissed as “phoney” by Commons Leader Jacob Rees-Mogg.