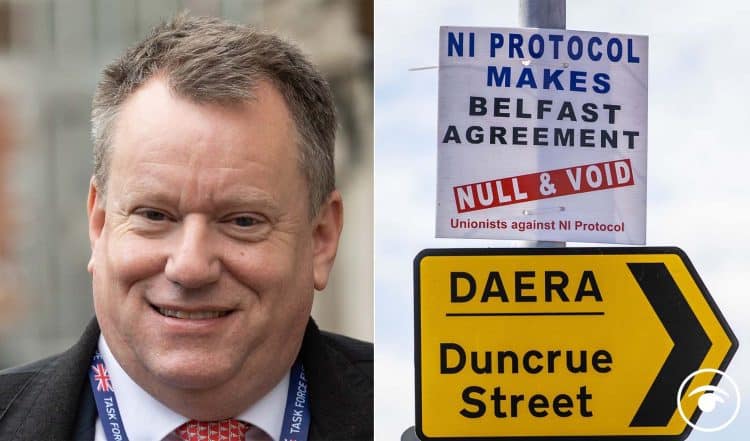 Lord Frost has condemned the European Union for behaving “without regard to the huge political, economic and identity sensitivities” in Northern Ireland.

The Cabinet office minister and former chief negotiator for Brexit also said the EU had “destroyed cross-community consent” with an “overly strict” enforcement of the Northern Ireland Protocol.

The attack came after the UK and the EU put forward proposals to address the dispute over the protocol, which was negotiated by Lord Frost.

He made the comments in the foreword to a new paper for the Policy Exchange think tank that sets out how negotiations in the Brexit process have been hampered by decisions made in 2017.

The terms of the protocol effectively kept Northern Ireland in the single market, creating a border down the Irish Sea between Great Britain and the fourth nation of the UK, which has angered unionists and hit the UK’s internal market.

Lord Frost said: “We must return to the protocol and deliver a more robust, and more balanced, outcome than we could in 2019.”

Lord Frost argues that a 2017 EU-UK joint report, which set the terms for the Brexit process, was a result of the UK failing to make “the necessary mental shift from being a member of the EU to negotiating exit from the EU”.

He also claimed it was a result of the “extreme weakness” of the UK Government after the June 2017 election.

The Policy Exchange paper – The Northern Ireland Protocol: The Origins of the Current Crisis, by Roderick Crawford – provides a chronology of Brexit negotiations and what went wrong in 2017.

It argues that commitments, particularly on the Irish border, in the 2017 joint report were “a diplomatic triumph for Ireland and the (European) Commission” but “failing to secure adequate reciprocal concessions was a staggering failure for the UK”.

Mr Crawford says the joint report – and what it committed the UK to – led to a flawed February 2018 draft withdrawal agreement and the subsequent November 2018 Withdrawal Agreement.

The paper says that led to the fall of Theresa May’s government in 2019 and “tied the hands” of the new Government led by Boris Johnson that year as it renegotiated the terms of Brexit.

Lord Frost also warns that enforcement of the Northern Ireland Protocol “has begun to damage” the Good Friday Agreement.

He claims he considered resigning in December 2017 after reading the terms of the joint report and realising “a crucial pass had been sold”.

Related: Brexit: ITV’s Robert Peston called out for tweets that have muddied water in fishing row