"It is not 'contentious', it is wrong. Incorrect. A deliberately bad translation designed to whip up anti-French feeling, anti-EU feeling too," wrote one Twitter user. 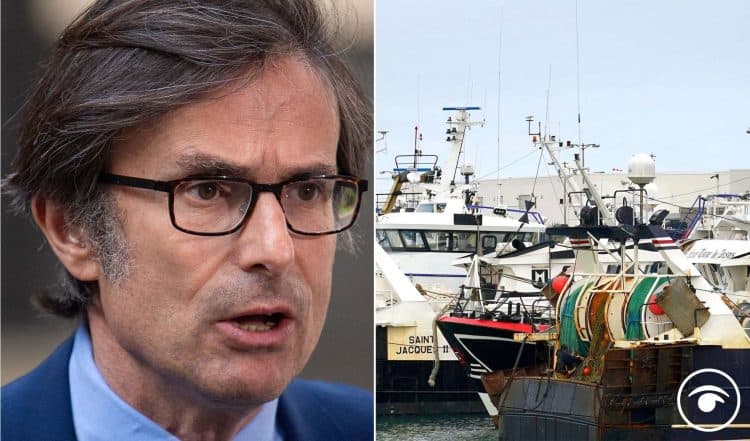 The UK will not “roll over” in the face of “unreasonable” threats from French president Emmanuel Macron over the post-Brexit fishing row, Foreign Secretary Liz Truss said.

It comes asITV’s Political Editor Robert Peston had been pulled into the row over a series on tweets regarding the dispute that shows no signs of ever ending.

Mr Macron has warned that unless Britain made a “significant move” to ease the dispute over licences to fish in British waters, Paris would introduce more stringent port and border checks from Tuesday.

Ms Truss said the UK would respond by triggering dispute resolution measures in the Brexit trade deal to seek “compensatory measures” if Mr Macron’s administration carries out its threats.

The fishing row adds to the tensions around UK-European Union relations, with the dispute over the Brexit deal’s Northern Ireland Protocol also causing a diplomatic row with Brussels.

Just to ramp things up even further ITV Political Editor Robert Peston decided to tweet on yesterday’s events, which even by the current standards was a farce, as you can see from reporter Joe Mayes’ comments over the fishing spat that rumbled on all day.

Anyway back to Peston he tweeted about the letter sent to PM from the French PM.

“@BorisJohnson is visibly angry at the letter sent by French pm @JeanCASTEX to @vonderleyen about the fishing row which said the UK should be punished for leaving the EU. This will run.”

“OK. Yes I know the PM’s interpretation of Castex’s resonant phrase is contentious, and that what the French pm wrote was that it is “crucial to show clearly to the European public”that “there is more damage from leaving European Union than from remaining inside”. But…”

“few can quibble that Castex’s stress on the importance of “showing” the costs of leaving the EU by imposing penalties on the UK in this fishing dispute will feel like a political threat, even if some think that the costs in a more general sense are obvious.”

Peston perhaps picked up the anger and fury from this tweet.

This was a reaction to his piece before Peston launched his thread.

As you can see Peston seemed to be backtracking from his first tweet and the reason is some of the message, from the French letter, was lost in translation.

Whether Peston or Wickham got confused in the translation, it appears that the best form of action might have been to 100 per cent clarify the meaning with our European friends first?

As these reactions to his tweets show the anger it has caused.

Related: Poll boost for Tories despite stench of sewagegate & tax burden at highest level since 50s