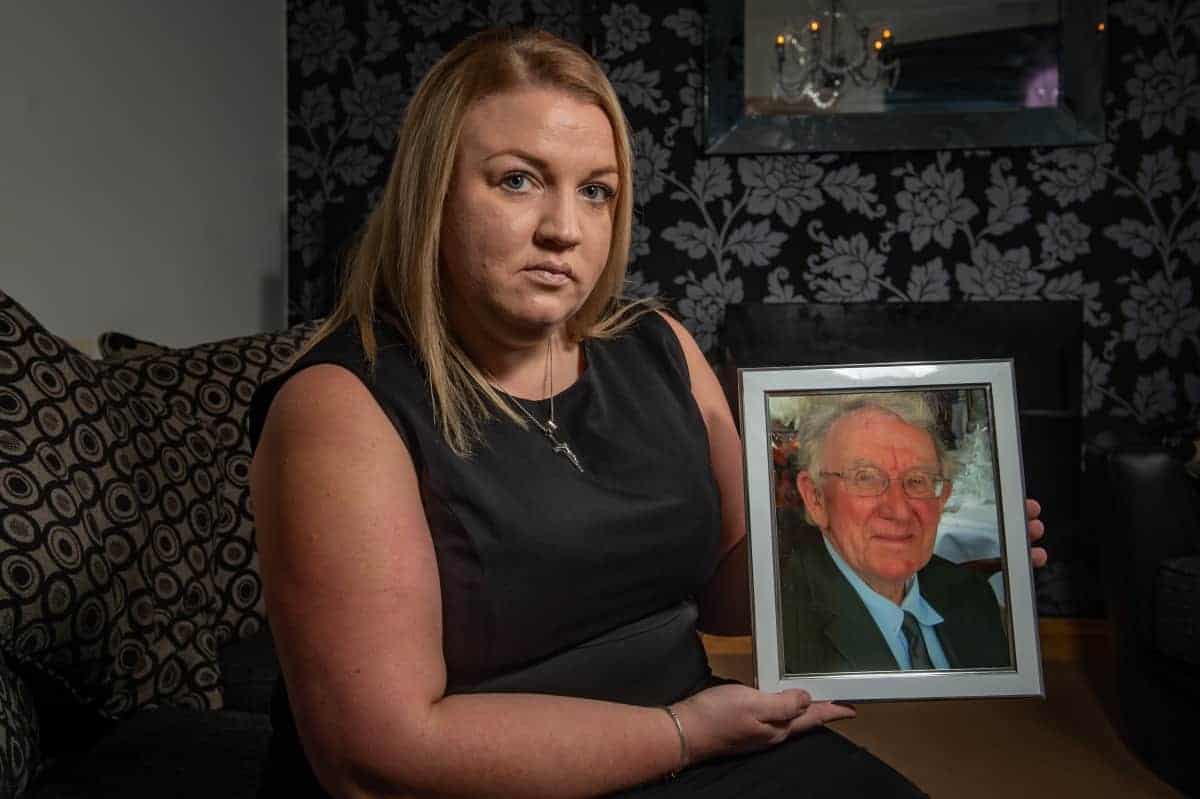 A daughter has spoken of her heartbreak after her elderly dad died after sliding off a hospital trolley he had been waiting on in a packed A&E for SIX hours.

She says she was ignored by medics as she repeatedly shouted for help until her father fell onto the corridor floor having been given no pain relief for six hours.

Emma said nurses only came when hes slid off the hospital trolley in front of other shocked A&E patients but he was pronounced dead shortly afterwards.

She is now demanding a full investigation into her father’s “undignified” death after he was left to “pass away in front of everybody” in a queue of up to 40 trolleys.

Devastated Emma, a former nurse from Tile Hill, Coventry, said: ““From the moment my dad died I was angry.

“I spoke with a doctor and a nurse and expressed my frustration, anger, upset at how my dad had been left.

“Although he was elderly, he wasn’t dying. I believe had my father been prioritised, or I had been listened to and taken seriously, then he would still be here

“To let a man die in pain in front of everybody is undignified.

“I must have spoken to six nurses in total. I knew he needed to be seen but they just weren’t listening. Nobody looked at him, or gave him pain relief. It was horrific

“I have lost my father due to the NHS failing and there is nothing that can bring him back.”

Just a few hours earlier, Donald had gone for Sunday lunch at his daughter’s house and was complaining of stomach pain.

In 2018, five liters of fluid were drained from his stomach due to an ulcer and a small hole in his oesophagus.

Emma, remembering his previous illness, immediately felt something wasn’t right when he refused to eat his dinner.

She said: “When I asked how he felt, he said that he felt like his stomach was full.

“He used this expression a year ago when he had an ulcer.

“I decided to ring 999 due to the symptoms he was telling me as I could see his stomach stomach was slightly extended.”

Paramedics arrived shortly after and he was admitted to the “rammed” A&E, where it took 90 minutes for the ambulance crew to complete the handover.

Emma added: “At 8.20pm, I made a nurse aware of his previous history and I also showed a photo from a year before of his stomach.

“At 10.30pm, I told the nurses and a doctor to say that my dad needed to be seen urgently.

“I went back to the nurses station an hour later, asking them to see my dad.

“At 12:30am, he vomited in the corridor and I shouted for help but no one came. I sat him up by myself.

“He then slid off the trolley onto the floor. A lot of members of the public were watching. I shouted for help again.

“It was only then that nurses came and helped, very reluctantly, to get my dad onto the trolley. He was given no pain relief while he was there, for the whole six hours.

“It was then that I knew he was gone.

“They then put him back on the trolley and rushed him into resus where they tried for about three minutes and then I told him to stop. He died at 12.59am.”

The following afternoon, Emma received a phone call from the coroner to say they couldn’t determine a cause of death.

She said: “This made me more angry. I then requested a post mortem, which was done on the Wednesday morning and that came back inconclusive.

“They told me it will be two to three months before they can issue a cause of death.

“Again, my frustration, upset and anger over all of this is obvious. I have been in touch with the Director of Nursing who phoned me to say that it will be investigated.

“All I got yesterday is that it is being dealt with, the investigation is underway and how sorry they are.

“Nurses should show compassion. I asked this nurse, ‘aren’t you a nurse because you care and want to help others?’

“My life will never be the same again. I watched my dad, my hero die.

A spokesman for University Hospital Coventry and Warwickshire said: “The Trust would like to offer its sincere and heartfelt sympathies to Mr Driver’s family and friends at this sad and difficult time.

“We are in contact with the family and are investigating this matter thoroughly.”

Donald is survived by his widow, Andrea, 72, and granddaughter Layla, 5. He had been married to Andrea since 1985.